Sommer Marsden: Long Lost and Then Some

I’d like to welcome one of my favourite authors, Sommer Marsden, back again. This time Sommer is answering questions about Long Lost,  her yummy paranormal sequal to Big Bad. Welcome, Sommer! 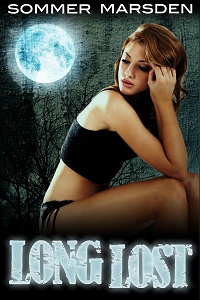 SM: Nope! In order to give you a teaser, I would have had to have written some of the book. As of yet, there is no book. The door has been open for there to be a book. But no book is in the works. Eek!

KD: *Folds arms across chest and pouts* Guess we’ll just have to wait then.

I was intrigued by the idea of ‘The Town,’ the place where the werewolves lived. How did you come up with the idea of a town as werewolf central?

SM: I would love to say something clever, but I have no clue. To me wolves/weres are pack animals. So pack animals tend to stay in their own pack and out of the lives of others. Town just made sense on some level to me, without me really thinking about it. And the name was just sort of my own little joke.

KD: When you wrote Big Bad did you already have a series in mind, or did that come later?

SM: I had no intention of there being a second book until about ¾ of the way through. Then I realized if the story played out the way it seemed to be going, there had to be a second book. No question.

KD: What inspired the series?

SM: I have to admit, I have no idea! I just got the idea one day while walking the dog. It came out of nowhere and once the characters started talking to me—Ellis, Ruby and Tyler all at once—I had no choice but to go home and start.

KD: What did you find the most fun about writing Big Bad and Long Lost? What was hardest?

SM: The humor was the most fun. The characters, even ‘side characters’ like Peabody, had a true back and forth with one another that was fun to sit and transcribe. When they bickered or gave each other a hard time, I’d often get the giggles. The hardest part for me, especially for book two, was to make sure I had a good balance of drama and humor and all that jazz. But my characters usually tend to themselves pretty well, I only have to monitor so much.

KD: Other forays into the paranormal on the horizon?

SM: Always! I have a book that’s been done for a while but I tucked it away for various reasons. But now I think I’m ready to dust it off, clean it up, put it out and work on the sequel. I also have plans for another paranormal in the near future that hopefully will be really fun but also kind of touching.

KD: Who was your favourite character to write?

SM: Ellis! EllisEllisEllis. He is one of my favourite characters ever. He’s based on a very real person who’s on TV pretty regularly. When this guy 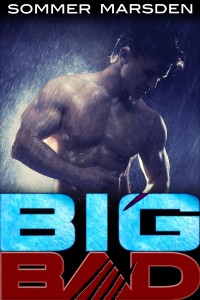 came on TV the other night, the man happened to have his hand on my foot and he said, “I just felt your pulse go up…through your toe.”

Ellis has a wicked but subtle sense of humor. I think that’s why I adore him so much. And he handles Ruby’s lunacy pretty well. And God, does he love her.

KD: Who did you find most difficult?

SM: The bad guys. The bad guys are always hard for me because I’d always rather write the fun and the humor and the sex. But I knew I did okay from my beta reader. He got goosebumps in the first book when I introduced my bad guy and he didn’t sniff out the villain in this one until the appropriate time. So I was pleased with myself.

KD: What was the highlight of 2011 for Sommer Marsden.

SM: Most unfair question ever! LOL. There were so many, to be honest, and for that I am grateful. I would have to say Big Bad and Long Lost coming out. I have such a love for those two books, I was very excited (and terrified) for them to come out. But so very glad when they did. So of a year full of good stuff, I guess I’d have to choose the release of those two novels as the cherry on top.

SM: My novel Restless Spirit comes out with Xcite in April, and I am so vibratey over that release! Also, an unnamed (secret!) novel that comes out soonish from Excessica is very anticipation-worthy too. Plus there are some super-secret upcoming projects that I am equally psyched and scared of 🙂

KD: *Rubs hands together conspiratorially* Ooooh, I love secrets! And one last Long Lost question: In your head, have you pictured what the movie version of LL would look like? If so, who would play whom and do you have a specific setting in mind?

SM: That is always a hard question for me because I don’t think that way about my books. Willsin Rowe was my beta reader for these books. I think that would be a super good question for him. I might have to ask him since he would leave me comments in the sidebar like ‘when the movie version of this comes out…’ 🙂 For me Ellis Bach is the celebrity chef Scott Conant. Ruby is faceless because, as sad as this might sound, all my heroines are sort of written from some small part of the core of me, so I don’t give them faces. Tyler is also faceless in my head as is Peabody. Wow. I am very unexciting. I tend to write more with a feel of a characters personality in my head than their actual appearance.

I would love to hear what people who have read the books think. Who they’d cast as Ellis, Ruby, Tyler and Peabody.

As for setting, most of my settings are local. I pick a piece of my city that I’ve lived in and write with that in my head as a setting. It tends to make it more realistic. Plus, I don’t mess up as much!

KD: What’s on the horizon for Sommer Marsden?

SM: Lots of freaking out, two books coming soon, more books being written, shorts in various anthologies, some novellas in an exciting project and hopefully some kind of Zen epiphany where I calm down and get organized. And then a pig will fly by my window. On a unicorn’s back. Carrying a leprechaun.

What’s a girl to do once she’s gotten her wolf? Spend Christmas in the belly of the beasts…or at least their Town. Ruby’s loving her new life until a single phone call makes her knees go weak, bringing the near past back into her cozy present. Seems an old evil has returned in a brand new nasty package to take another swipe at Ruby. Ellis isn’t about to let that happen, and neither are her friends, but Ruby discovers she will be the only one who can really do what needs to be done. And it turns out there are things at stake she never imagined. Things she’s willing to die for.