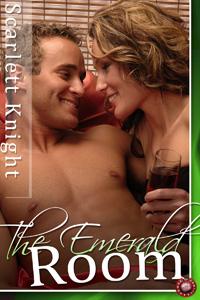 The Emerald Room by Scarlett Knight

The Emerald Room bar was one of the classier joints where Nate got paid to play these days. Every Friday for the past two months, he put on a jacket and bowtie and sat at their shiny baby grand, tickling the keys for his two-hour set. It was a hell of a lot better than some of the trashy spots he was forced to waste his talent in, places whose patrons were so noisy and crude, where his music drowned beneath the sound of shrill laughter and glass breaking.

But not this place.

She always showed up when he was about thirty minutes into his set, usually around the time he was playing soundtrack tunes from movies like The Godfather. In she’d stride, wearing one of her killer dresses. Sometimes it was the little black one, her hair cascading like a golden wave down her bare back. Other times she wore the sparkling red number. Tonight she donned a silver gown with a slit all the way up to the top of her right leg, the lacy band of her stocking peeking out whenever she moved just right on the barstool.

God, did Nate have a thing for stockings.

Her black stilettos only made her heavenly legs even more mouthwatering, the way they caused the calf muscles to flex just right. In between songs he took a sip of his bourbon and loosened his tie. To imagine those legs wrapped around him…it was the fuel for many a fantasy after he went home, too chicken shit to talk to her.