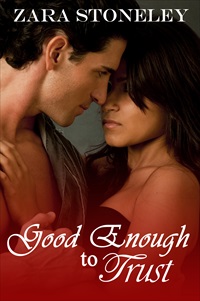 Do you trust the boy you loved, or the man you might?

Sophie has only one thing on her New Year’s resolution list – sorting out her life.

Losing her parents was hard, blaming herself hurt more – but was it really her fault, or was accepting the guilt easier than facing up to the truth?

Retracing her steps was never going to be easy, risking her heart again is even harder – and when there’s two men to choose from will it be easier to trust the man she’s never stopped loving, or the one that might give her the new start she needs?

Available from – Amazon (UK), Amazon (US)

“No, because I’m not. Are you?” He didn’t wait for my answer. Just gently propelled me backwards until my back met the soft covering of the lichen-covered rocks and my hips tilted forward until I could feel the heat of his cock pressed hard against me.

“I’ve missed you so much, Sophie.” His hand slipped under my T-shirt burning a molten path up my body that left me whimpering. “Have you come back to torture me, show me what I’ve missed out on?”

I shook my head dumbly, because right now my brain hadn’t got the capacity to think, to answer questions, to do anything but pander to my body’s reactions.

“You shouldn’t have come back.” His voice was hoarse, his hand closed around my heavy breast, his thumb brushing over a nipple I knew was hard, but he was looking at me. Straight to the heart as they say.

“Shit, Sophie.” And when he kissed me it wasn’t the exploration of yesterday it was hard, physical in a way that made me gasp, controlling and yet demanding, as though he had to catch up on all the years in between.

And it made me cry.

I clung to him, clung as though I was afraid he’d go, even though his hard body was pressed against mine, his mouth claiming mine. I could taste my salty tears as our teeth clashed, as his fingers meshed into my hair, as the hunger we’d both kept under control erupted. And I was shaking, trembling with need and anticipation as I tasted the lust in his mouth, felt the want in his body.

He grunted as the button of my jeans gave way for him and his hand forced its way into my panties, his fingers slipping into my wet channel. I lifted my leg, wrapped it round him, my hand on his face as we drank from each other. And all I could do was rock against him, clutch at him, lick him and kiss him as the tears gradually slowed to a stop and a hunger that scared me took its place.