A Taste of Paris by Lucy Felthouse

Book two of the A Taste Of… series

Ryan Stonebridge and his friend Kristian Hurst are traveling on their year off before going to University.

Ryan could hardly believe his luck. After a sex-packed day and a bit in London, he was now being propositioned by a sexy older woman on the Eurostar. The Paris-bound train had just started moving and it seemed the woman wanted to spend at least some of the two-and-a quarter-hour journey to the French capital fucking him in the toilet.

He shook his head disbelievingly. Then, after making sure no one had witnessed their exchange—when she’d given him the come-on—he slipped from his seat and made his way as nonchalantly as possible in the direction the woman had gone. He quickly found her, standing in the area between carriages that also housed the public conveniences.

She looked around, ensuring no one could see through the glass doors at the ends of the carriages to either side of them, pulled open the toilet door and dragged him inside.

Ryan barely had time to catch a breath before she’d locked the door, slammed him against it and molded her lips to his. She tasted of expensive champagne—she’d probably been indulging in St. Pancras station’s champagne bar—and it suddenly made him very aware that, although she’d started their sexy rendezvous, he was most likely taking advantage of an inebriated woman. He twisted his head away.

“Hey,” he said, grasping her arms and pushing her gently away from him. “Don’t get me wrong, you’re gorgeous and very, very sexy, but you’ve been drinking. I don’t want you to do something you might regret later.”

The woman laughed, long and loud, and Ryan worried that someone might have heard her and wonder why on earth there was a woman laughing to herself in the train toilets. The last thing he wanted was to open the door and find a pissed-off member of staff waiting there. There was no excuse for two adults being in a locked cubicle together that anyone would believe.

Clapping her hand over her mouth, the woman suppressed her mirth, then finally spoke. “Yes, gorgeous blond one.” Her French accent surprised him—he’d thought she was a tourist heading to Paris. “I have been drinking champagne. But only a glass. I’m certainly not drunk.”

With that, she pounced on him once more, and Ryan decided not to resist any longer. They were both consenting adults and he had protection in his pocket—so where was the harm in indulging their baser instincts? His cock definitely didn’t see any further reason for delay as it filled with blood and pressed against the crotch of his jeans.

He pushed his fingers into her thick black hair and pulled her more tightly to him, deepening their kiss. She was eager and, judging by the way she was rocking her hips against him, incredibly horny. He held out for as long as he could, exploring her mouth with his tongue, nibbling at her plump lower lip and pulling her hair to expose her white throat. Before long, though, the pants and tiny mewls coming from the woman’s mouth pushed him to the point of no return. His cock was all but bursting from his jeans and he really needed to be inside this woman’s pussy.

A Taste of London by Lucy Felthouse 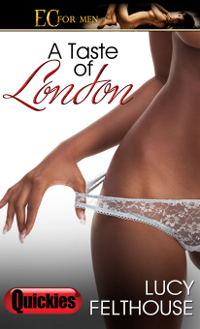 “Come on, mate, let’s go and grab our travel passes from the machine,” Ryan said, his familiarity with the locale apparent by the way he marched along the train platform toward the heart of St. Pancras Station.

“What? Uh – okay.” Kristian re-arranged his bag on his shoulder and scurried to keep up with his friend.

Bypassing the huge line of impatient, muttering people queuing for the manned booths, Ryan headed to one of the ticket machines. By the time Kristian caught up, Ryan already had a travel pass in his hand.

“Been practising your French for the trip, Kris?” Ryan punched his friend on the arm playfully. “No worries. We’re only taking one trip tonight so you just need a single to London Bridge on the Tube.”

“All right,” Kristian replied, carefully tapping the relevant areas of the touch screen, feeding his money into the machine and triumphantly retrieving his ticket.

“Come on then.” Ryan hoisted his bag back onto his shoulder and walked in the direction of the Underground, with Kristian close behind.

“Hey,” Kristian said, pointing as they passed a map of the Underground, “don’t you need to check where we’re going?”

“Nope,” Ryan said, without breaking stride, “I know London pretty well, plus I double checked all this stuff when I organised this part of the trip. What can I say, it’s the Boy Scout in me.”

“Cool. I guess it makes things easier when you’re not checking a map every two minutes. So how long will it take us to get to London Bridge station from here?”

They stepped onto the escalator. Rather than standing still and letting the moving staircase do its thing, Ryan continued to walk, eager now to get this leg of traveling over and done with so he could have some fun. It had been a long day, or at least it felt like one. They’d actually only traveled around one hundred and fifty miles from the outskirts of the Peak District to the centre of London, a couple of hours on the train, but it had felt like longer. Perhaps because he’d been so eager to actually get to London and start their adventure.

“Not long mate. Probably about ten minutes. It’s a direct journey and at this time of day it shouldn’t be too busy. We can dump our stuff at the hostel then have some drinks next door.”

“There’s a pub next door? No wonder I let you sort out this trip. You’re a fucking genius!”

By now, they’d reached the bottom of the escalator. Ryan stepped off, then turned to face his friend. Tapping his head, he grinned and said, “It’s not just a hat rack, mate.”

Kristian laughed. “You’re right there.” He paused. “It’s a fucking chick magnet, too!”

Ryan frowned, looking genuinely confused. “It is?” Then he shook himself and smiled. “I wish someone had told me!”

“Are you kidding, mate? Everywhere we go, women are checking you out.” Kristian grinned. “Why do you think I agreed to go traveling with you? I’m hoping some of your apparent sex appeal will rub off on me and get me some action!”

Ryan laughed, then started walking towards the southbound platform for their connection to London Bridge. “So that’s your ulterior motive, eh? Never mind being my best mate, or seeing the world, you just wanna get laid?”

Lucy is a graduate of the University of Derby, where she studied Creative Writing. During her first year, she was dared to write an erotic story – so she did. It went down a storm and she’s never looked back. Lucy has had stories published by Cleis Press, Constable and Robinson, Decadent Publishing, Ellora’s Cave, Evernight Publishing, House of Erotica, Ravenous Romance, Resplendence Publishing, Secret Cravings Publishing, Sweetmeats Press and Xcite Books. She is also the editor of Uniform Behaviour, Seducing the Myth, Smut by the Sea and Smut in the City. Find out more at http://www.lucyfelthouse.co.uk. Join her on Facebook and Twitter, and subscribe to her newsletter at: http://eepurl.com/gMQb9