Eros the Trickster – A Guest Blog by Monique Roffey (@MoniqueRoffey13)

“Eros is stronger than the go,” my shrink once said to me. Yes, this kind of love is strong and we can topple over, or be dragged over, and sometimes swiftly. One minute we are rational-minded, thoughtful and grounded, the next we are ‘stupidy’ (as we say in Trinidad), and have taken leave of our senses. It’s a kind of moral death, too, or brain malfunction. We have been struck. We do things that are unethical (shag another’s husband or partner, for example). It’s a condition, a kind of brain fever. I’ve seen the best of us go under. Sometimes we suffer for months, even longer. An unrequited erotic attraction to another person – that’s a hard one. Yuk. Also, it’s hard to walk way from, too. And hard to set yourself straight; hard to keep the whole thing in its proper perspective, because Eros is a powerful player in the forces of the sexual love game. He tricks us, and we capitulate. Over we go. Eros sets the proverbial cat amongst the pigeons. Eros is a chaos element, the Fool in the Tarot, not the Lovers card; he is the Magician, too. Eros sets us on our travels; Eros is a cosmic bum, a Fool, and a fooler too.

In my sexy new novel The Tryst, Eros arrives in female form, in the small red haired beauteous character of Lilah. Lilah the domme, the imp, the pest, the player, the predator. An innocent couple Bill and Jane invite her into their home and she wreaks havoc on them and delights in it. She mashes them up, changes things between them, forever. That is her habit and her great kink, to fuck Innocents like Jane and Bill. Hit and run, leaving them wanting more. She is the great seducer, a Lilatha, a game changer. She’s done it many times, taken herself out on a night hunt, drained the man of his power, left him sleeping, and climbed out the window. This time, she is caught, though. This time she too is struck by another pesky imp, Eros. Bam. Over she goes.

I scared Miss Sexual Desert good and proper, but found myself quite shaken too. In the cab on the way back I touched my cheek where she’d slapped me twice. The sting was still there, surprising. Heat in her after all, the little prig. I don’t think she believed what I said about me and Bill; I could hardly believe what I’d said myself, that I was journeying back to Bill, paying a cab to take me to him. Something has happened between me and Bill. What had been happening to me? Being outdoors in the fresh air had given me a taste of reality again. Whatever had been going on in that creepy house between us had to stop. It was only twenty-four hours since I’d met this dreary couple in a bar, a pair like so many others – Jane and Bill, Janet and Joe, Mary and Pete, just like many I’d encountered. Same deal.

And yet this time it had been different. I hadn’t escaped so easily. I’d prevaricated because of this new feeling. I hastily took stock. I had stayed on a hunt long after the kill. I had met a lover in the form of a man in the human realm. A First. Bill could meet me, match my skills. Bill had located my spot, caused me to gush like no other, not even Samael. And – was there more? There had been another aspect which I found hard to name, a feeling which had swiftly passed over me during our hours of sexing. It had been a flash of a rich, full feeling. I had felt an empathy with Bill, like he was more than just a mortal man. Bill had stirred me up and I wasn’t accustomed to this chaotic mixture of feelings inside.

Whatever these new ‘feelings’ were or had been, they had disappeared. Vamoosed. I couldn’t remember them. Love? Ha. I felt like my old self again. I felt itchy. Loose. I wanted to be on my way, back into the forest. I remembered the cat, Choo Choo. I thought of the hexacious tower I’d created, amidst all that iron. I had stamped my mark on this couple, I always do. I had reconfigured things between them, and that was what the wife had wanted me to do. Too bad if she had changed her mind. Too bad. And Bill, well, he had given me a turn. I had taken my life in my hands to have intercourse with him. He was one to remember. Okay, I said to myself: there’s nothing like experience. This man Bill has been a first. I will go and say goodbye to him.

Bill greeted me at the door with decisive amorous kisses. I’d only been gone a couple of hours, but already he wanted more of my talents; he was tugging at my clothes, trying to remove my skirt. I pushed him off. That constant shocked expression had disappeared. He looked different. Pinker in the cheeks. He wanted more of me and I’d had enough of him.

“I wish you hadn’t either. What did she say?”

“What do you think she said? The usual jealous wife stuff. Do you care?” A strange look came into his eyes. Soft. Thoughtful.

“I don’t want you to disappear like that again.” I stared at him. “What are you saying?” Bill wanted to keep me there. He’d struck gold and fuck, shit, damn and hell – yes, he was expecting I might even like to stay with him!

“Me? Stay here with you in this creepy old house, with all these red and yellow walls – me? You freakin kidding me?”

“We can paint them white – or black – or whatever you want. Just stay, another night, at least. Stay a week. A month. However long you like. I was . . . worried.”

“Why should I stay?”

“For the same reason other imps like you have stayed with men. To be happy. Wouldn’t you like it here? What’s your home like? A hut? A bender made of twigs? An earth-floored cave in the woods? Do you live underground? Eh? What? Surely this must have some appeal?”

“Have you fucked my cat?” He said this with a knowing smirk.

I threw myself at Bill, tore at him and wreaked my vengeance and distaste on him and their Goddamn marriage. I turned nasty on him, biting him and this time when we were fucking we were like cats fighting. Furniture tumbled around us. Again, I was matched.

Bill pinned me down and then he fucked me senseless and dear-God-in-heaven more than anything – this was not okay. This was why I fled in the first place, to be so taken like this by the very first man ever made. Rape. It was all women were to expect. And so my foremother Lilith ran and ran away from man and God, only to be further humiliated in the desert. She was so angry then, she made daemons, thousands of them every day, her offspring. She became an outcast, forever. I spat at Bill and fought, but he held me down and then he fucked me hard and rough and a pearly liquid gushed from between my legs, a silken waterfall slipping out. My whole body spasmed in the fullness of my orgasm. He could make me come just like that. It was as if he’d learnt the knack. And all the while I thought: I am lost, lost. Go home, get out of here. I was embarrassed, torn open. I hated him then. I didn’t want to look Bill in the eye. He thought he now had some power over me because he could make me gush. When he was done he withdrew, his own body shuddering, his semen still dripping. His cock hadn’t shrivelled with the release, it still looked plump and even ready for more. Bill glowed, exulted with his conquest. I’m sure he thought he’d turned a trick himself. He kissed my stomach. But I was cold to him, cold in my heart. 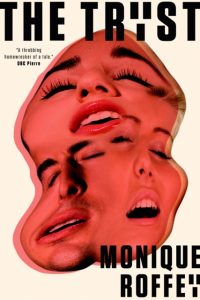 London, midsummer night. Jane and Bill meet the mysterious Lilah in a bar. She entrances the couple with half-true, mixed up tales about her life. At closing time, Jane makes an impulsive decision to invite Lilah back to their home. But Jane has made a catastrophic error of judgment, for Lilah is a skilled and ruthless predator, the likes of which few encounter in a lifetime. Isolated and cursed, Jane and Bill are forced to fight for each other, and, in doing so, discover their covert desires.

Praise for The Tryst

“What makes The Tryst an unexploded virus isn’t just the quality and brightness of Roffey’s writing on sex, even as it uncovers inner glades between flesh and fantasy where sex resides – but the taunting clarity of why those glades stay covered. A throbbing homewrecker of a tale, too late to call Fifty Shades of Red.”

Monique Roffey is an award-winning Trinidadian-born writer. Her novels have been translated into five languages and short-listed for major awards including the Orange Prize, Costa Fiction Award, Encore Award, Orion Award and the OCM Bocas Award for Caribbean Literature. In 2013, Archipelago won the OCM BOCAS Award for Caribbean Literature. Her memoir, With the Kisses of his Mouth, was published in 2011. She is a Lecturer on the MFA in the Novel at Manchester Metropolitan University. She divides her time between the East end of London and Port of Spain, Trinidad.