They must both learn to trust again in order to save her ranch and her life. @TeriLRiggs #westernromance #ColtraneCorners #OldWestRomance 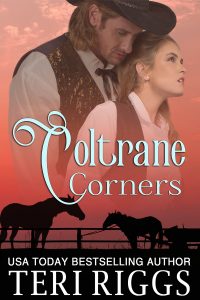 Elizabeth Coltrane has given up on finding a man who will love her in spite of the physical and emotional scars she carries thanks to a mountain lion attack. When her father is murdered, she inherits Coltrane Corners. The only man she can trust to save her cattle ranch is the foreman she just fired…and the man she’s loved since she was a child. But can Elizabeth keep her desire for Chase under control and her heart safe as they work side by side every day?

Chase Cameron is determined the bad blood of his abusive pa will end with him and vows to never marry. When Elizabeth needs his help getting her cattle to market, Chase has to decide if he can do the job while fighting the strong attraction he has to her.

When accidents begin to happen, threatening Elizabeth’s life, Chase discovers he is willing do whatever takes to keep her safe. They must both learn to trust again in order to save her ranch and her life.

Chase stepped past her and stood next to the buggy. “Everett sent me to fetch you home. Now if you’d be so kind as to step aside, Miss Elizabeth, I’d be happy to load your trunk in the back of the buggy.”

Although she deserved his sarcasm, she cringed at the way he said ‘Miss Elizabeth.’ “I’d rather stick a cactus needle in my left eye than ride anywhere with you.”

“I think that can be arranged, but I imagine a poke in the eyeball would hurt like the dickens.”

“I’ve been gone six years, and you haven’t changed a bit, have you? Everything’s a big joke. You’re more infuriating than ever.” What was wrong with her? She couldn’t keep the hateful words from tumbling out. “I’d hoped you might have learned a few manners and social graces. But here you are, still a simple cowpoke.”

“What can I say? Once a donkey’s behind, always a donkey’s behind.” He threw her words back at her. “You know how things go when you spend your days chasin’ after cattle and ridin’ fences. A man can’t be expected to learn much in the way of social graces when he’s out mucking through pastures full of cow patties and horse dung.”

She’d finally pushed him too far, gotten a reaction from him that wasn’t served up with a smile. Elizabeth saw the hurt in his eyes, heard the anger in his voice. Her face heated with guilt.

“I may have been overly crude when I called you simple and a donkey’s behi… Well, you know what I said.” She let her eyes drift down. She shouldn’t have spoken in anger. The insults weren’t very ladylike, but considering the way he’d treated her in the past, she’d truly thought he deserved the words…until she saw the hurt in his gaze.

“I accept your apology—such as it is.”

Her head jerked up. “I wasn’t offering you an apology.”

“No kidding.” His voice was low. “I’ve tried to ignore your bad behavior since this is your first day back, but damnation, Elizabeth, when did you turn into such an uppity snob?”

“Pardon me?” She tilted her head to one side. “I’m not a snob.” Well, maybe she did sound a little snooty, but he was the one to blame for that. He brought out the worst in her. “I don’t—”

Her eyes followed Chase as he sauntered back to the stagecoach in that don’t-rush-me cowboy way that always looked so darn good on him. Oh yes, years of hard work had definitely added plenty of muscle and strength to his broad shoulders. He picked up her heavy trunk as if it weighed less than a barn cat and carried the chest on one shoulder to the carriage without even breaking a sweat. He made quick work of securing the trunk, then he was back at her side, standing a bit too close for her liking.

“You gonna let me escort you home or are you planning on walking?” He glanced down at her feet and shook his head. He looked up, tipped his hat back, and scratched his forehead. “I can tell you right now, the fancy city boots you’re wearin’ aren’t gonna carry you very far.”

Elizabeth weighed her options and wondered how she’d managed to back herself into a corner so quickly. Of course she wasn’t going to walk all the way to the ranch, but she sure as heck wasn’t about to admit that to Chase. She couldn’t very well rent a horse from the livery—she wasn’t dressed suitably for riding. Maybe she’d hire a carriage instead.

“Damnation, Elizabeth. Either you’re comin’ or you’re not.”

“I’m still thinking. There’s no need to raise your voice at me.”

“If you’re gonna be noodling on your decision much longer, I’m gonna march my boots over to Burt’s Saloon and have a drink.”

“What a good idea. You go have your drink, and I’ll noodle on the subject a while longer. I’ll give you my answer when you return.”

He was grumbling under his breath as he walked away. She heard him anyway. “Well, if this don’t beat all. Damn fickle woman.”

Fickle? She’d show him fickle. “Oh, Chase, before you go, would you be kind enough to give me a lift up? I’d just as soon sit while I noodle.”

He stomped back in her direction, kicking up small clouds of dust.

She liked—perhaps a little too much—the warm, confident feel of his large hands wrapped around her waist as he gave her a boost up.

“Ten minutes, Miss Elizabeth. Then I’m comin’ back and you’d best have an answer for me.”

Elizabeth busily tucked her skirt’s mountain of material into the carriage.

“I promise. You’ll have your answer when you return.”

For the first time since she’d stepped from the stagecoach, she graced him with a smile.

Chase swung open the saloon doors, still riding high on the smile Elizabeth had offered. A smile more brilliant than a Texas sunrise and more embracing than a Texas sunset, he marveled. Instead of the braids she’d worn as a child, her blonde hair was now pulled back in a tight chignon. Several whisper-thin tendrils had escaped, caressing the smooth looking skin of her face. His fingers itched to tuck the flyaway wisps of hair back behind her ears. Better yet, he wanted to toss the stupid hat, free the hair from its tight bun, and run his hands through the loose curls.

Elizabeth confused him. He was drawn to her, yet she’d been nothing but pure mean since she’d stepped off the stage. But damned if a certain one of his body parts wasn’t about to embarrass him in the middle of Burt’s.

What was he thinking? Elizabeth was off-limits. She was right. He was nothing but a simple cowpoke. She deserved better. Hell, for all he knew, he’d turn out like his pa a few years down the road. And what would her father think? Everett was not only Chase’s boss and mentor, he’d become his closest friend over the years. He’d definitely want more than a simple cowpoke with bad blood in him for his daughter. Maybe when Chase’s ranch became successful, he’d finally feel respectable. He pinched the bridge of his nose. Nope. Wasn’t gonna happen. Even when the ranch began producing, his past would haunt him. He’d stick to his plan, one which didn’t include Elizabeth, or any other woman. Now all he had to do was convince his unruly body part of the fact.

He ambled to the bar, ready for a drink, and hoping to put all thoughts of Elizabeth out of his mind. The piano wasn’t playing. Then again, it seldom was until evening when things livened up in town. This time of day, the only noise came from the loud voices and laughter at the table where a group of men were playing a rowdy hand of poker. The place smelled of stale tobacco and cheap perfume. Only two of Burt’s saloon hall girls were strutting their assets around. They were dressed in colorful, flesh-baring costumes and cheap boas. Chase thought of Elizabeth’s feathered hat and smiled. She’d probably paid a fortune for the damned thing. He saddled up to the bar, with a grin still plastered across his face.

Burt brought him his usual shot glass full of whiskey and set it down in front of him with a loud thwack, then did a double take.

“Damn, Chase. What’re you all gussied up for and smiling like an idiot about?”

“I don’t know what you’re talking about, you crazy old geezer. Been dippin’ in the barrels a little too much today?”

“I don’t drink this piss-water. I just sell the stuff to fools like you.” Burt leaned in and sniffed. “So come on and tell me, what’s the pretty smell? You’re wearing cologne, ain’t you? Kinda reminds me of cloves.”

“It’s called bay rum and it’s none of your business how I smell.”

“You’re all shaved, bathed, and wearing clean duds.” Burt stared at him for a moment. “Hell in a handbasket, you done gone and dusted off your Stetson. Something’s up.”

“Well, if you gotta know, I’m escorting the boss’s daughter home to Coltrane Corners. I thought maybe, since she’s been living back East for the last six years, she might not be appreciative of ridin’ alongside a dust-covered, unshaven, cattle-smelling ranch hand.” Simple cowpoke my ass. “Now if you’re done mindin’ my business, I’d like to enjoy my whiskey in peace and quiet, and then be on my way.”

The nosey barkeeper leaned forward, elbows on the bar. “Can I ask you one more quick question?”

“If it’ll buy me a moment of alone time? Sure, ask away.”

Burt stood straight, lifted a glass, and wiped at the rim with a cloth. “Are you picking up Miss Coltrane in the Coltrane carriage?”

“Of course I am. You don’t think I’m gonna toss her over my horse’s back and ride away into the sunset with her, do you?” Chase scrutinized Burt’s face and narrowed his eyes. “Why’re you asking?”

“’Cause if my eyesight ain’t failed me, I believe the Coltrane Corners’ rig took off about the same time you was a-walkin’ through the saloon’s doors smiling like a ninny. And you, my friend, weren’t riding in it.” 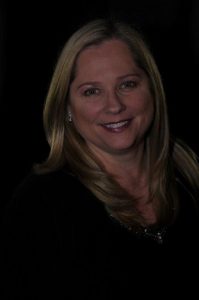 As a child, Teri made up her own bedtime stories. When her children came along, Teri always tweaked the fairy tales she told her daughters, giving them a bit more punch and better endings when needed.

Now she spends her days turning her ideas into books. She lives in Marietta, GA with her husband.

December 27, 2016   Tags: coltrane corners, new release, romance, teri riggs, western romance
Category: Guest Blogger   Comments Off on They must both learn to trust again in order to save her ranch and her life. @TeriLRiggs #westernromance #ColtraneCorners #OldWestRomance