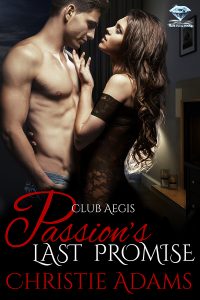 Hers to protect…his to serve…

When a failed kidnap attempt leads to CEO Dr. Simon Northwood acquiring a bodyguard, he isn’t prepared for close protection specialist Ros Edwards, a former captain in the Royal Military Police. Experienced submissive though he is, having a woman stand between him and any further threat is completely untenable.

Assigned to protect the genius behind a project of national importance, Ros unexpectedly encounters the most delicious man she’s met in a long time. As a Domme, she’d love to play with him, but even if he weren’t in need of her professional skills, there’s no way he’s submissive.

A determined man. A stubborn woman. When passion flirts with danger, the last promise is the toughest one of all…

“Not at all, Dr. Northwood.” She turned towards him and slipped the smartphone back into her jacket pocket. “A minor logistical issue, that’s all. Is there something I can do for you?”

“I was wondering if we were still on schedule to depart for Oxford as planned.” From what he’d heard, Simon had his doubts.

“Of course, sir. As I said, a minor logistical issue.” She paused, fixing him with her coolly assessing gaze. “I was just about to make coffee—would you care to join me?”

He had a conference call in a few minutes, his third of the day, but Simon suddenly found himself more in need of a shot of caffeine, and another opportunity to try to goad her into going Domme on him. He’d been trying all week, and this morning was the closest he’d come yet. He strode over to the desk to call his PA.

“Alicia? Can you let Martin know that he’ll be handling the finance call in ten? Give him my apologies—something’s come up that requires my attention elsewhere. Thanks.” He replaced the receiver and turned his attention back to his bodyguard. “I don’t mind if I do, Miss Edwards.”

She gave a brief nod in acknowledgement. He watched her disappear into the adjoining kitchen, only to hear seconds later the crash of breaking glass followed by the colourful and creative cursing he was coming to associate with his beautiful bodyguard. Simon headed for the epicentre of the disaster.

As if someone had flicked a switch, his nonchalant attitude came to an abrupt end. Ros was running her hand under the tap, washing away the blood that was oozing from a cut to her hand. Broken glass littered the worktop and the floor.

Simon’s protective instincts kicked into action, sweeping aside all thoughts of provoking her again. He grabbed the first aid kit from one of the cupboards. “Let me help.”

To his surprise, she allowed him to take her hand in his. Strong and capable, it was at the same time neat and feminine, with short but immaculately manicured nails. No rings, but as he’d told himself the first time he’d checked, that didn’t necessarily mean anything.

“Kamikaze glassware.” Ros glanced up at the open cupboard. “When I was getting the mugs to make the coffee, I accidentally nudged a couple of tumblers. They decided to take their name seriously and try out for the Olympic gymnastics team. I can tell you now, their technique sucked.”

Simon pressed his lips together, trying not to laugh at the latest glimpse of her taste in humour. She’d caught him unawares like that once or twice before, with a little nugget of dry wit. “What were you trying to do? Catch them or juggle with them?”

She shot him a dark scowl. At that precise moment, she looked more like the recipient of a sense of humour bypass, then he realised she was more annoyed with herself.

“I was picking up the pieces. Some of the shards started slipping out of my hands and I grabbed at them on instinct. Stupid thing to do. At least it’s not my right hand.”

He quirked a questioning eyebrow.

“Trigger finger.” She waggled the digit at him. “Can’t pull a trigger if I’m bandaged up.”

“Or if you end up slicing through tendons.” Simon’s slightly harsh tone was a reflection of his discomfort at the way she spoke so candidly of using firearms. “A dustpan and brush might have been safer than trying to pick up the broken glass.” He nodded in the direction of the tall corner cupboard.

For a moment she looked like she was about to argue, but then the change in her expression and a tiny, careless shrug acknowledged the truth of his words. Simon turned his attention to her injuries. There were some superficial cuts but the main one wasn’t as bad as he’d first thought—she’d probably get away without needing any stitches in it. Having confirmed there was no glass in the wound, he pulled on some surgical gloves and ripped open a sachet containing an antiseptic wipe.

She was standing so close now. He tried not to be distracted by the calm rise and fall of her breasts, or the subtle floral scent of her perfume. He tried not to respond to her steady gaze resting squarely on him. He tried not to think of the probable reasons why a former RMP officer never even flinched at the sting of the antiseptic.

Having put a couple of Steri-Strips on the cut, he then made the move that was his downfall. It was the small, insignificant act of glancing up at Ros’ face. She was staring at his hands in rapt fascination, lips slightly parted, almost inviting a kiss.

Carpe diem. The Latin phrase blazed through Simon’s mind like a meteor. She hadn’t responded to provocation, so perhaps a different tactic was called for. He swept aside the memory of the altercation they’d had a few hours earlier, focusing instead on this moment.

Simon pulled off the surgical gloves with a snap. In a club, he’d never dream of doing what he was about to do—it went against everything he’d been trained for, but this was an opportunity he couldn’t afford to miss.

Before Ros could move away from him, he took her uninjured hand in his and raised it to his lips. Before his inner voice could convince him he was making a huge mistake, he pressed a gentle kiss to her palm.

He wasn’t expecting the sound of his name to send a delicious shiver through his body. The formality, though…just as guilty of that as she was, maybe even more so, but he wanted it to end. “Simon.”

Desire would be held back no longer—he claimed the sweetness of her mouth, and prepared to take his punishment for crashing through her boundaries…

When she was asked about how she got into writing, Christie realised she’s been putting pen to paper—or fingers to keyboard—for longer than she thought. It all started in her teens, with stories featuring characters from her favourite TV shows—usually action dramas—but in her imagination, those characters were given a romantic life to go with the all-action one their audiences saw.

Christie lives in north-west England. When not at the day job, she can usually be found wrestling with the characters in her latest novel. Occasionally she finds time for sleep, and maintains her social skills through, among other things, regular attendance at a pub quiz, which forces her to think about other things besides plots and characterisation.