It all started with an email from Jessica Tully Wednesday afternoon late asking if I could be on C5 news on Thursday night. We traded emails then a couple of phone calls and all was set for me to go into the studios in the afternoon to pre-record an segment for a piece they were doing on the rise of erotica for eBooks. It was supposed to run on the five o’clock and the 6:30 news. I began immediately to psych myself for the occasion. It wouldn’t be too scary. After all, it would be pre-recorded.

The day of the big event, I took extra time putting on slap, even emailed to see what I should wear. Then I packed my most sexy, most vicious shoes just in case, god forbid, the camera did a foot shot. Hedgehogs rock for walking, but even my shiny new blank and mauve ones are NSFTV. I looked about as telly-worthy as it’s really possible for an introverted smutter, like me, to look on a Thursday morning. I was just ready to step out the door when the call came. That’s right, my 2.5 minutes of fame had been cancelled. Now while the introvert in my was gasping a sigh of relief, the practical part of me was wondering what the hell I was going to do all made up and dressed to the nines at eleven o’clock on  Thursday morning? It seemed a pity to have wasted the war paint for nothing.

Having worked in television, though in a MUCH smaller market and in what must have surely been another lifetime, I knew that news programmes and plans for stories are always prone to change, not at the last minute, but in the last ten seconds. That much certainly hadn’t changed!

Before I could finish wondering what to do with my now freed-up day, Jessica called back and asked if I’d be willing to do the 6:30 program. LIVE! After I’d finished trembling pathetically, I gulped hard, closed my eyes and said yes, I’d do it. I really HAD worked in television, after all! But I worked with production and NOT in front of the cameras. Oh wait, there was that one Christmas when the powers that be made all of us, individually, don a silly Santa Clause hat, stand in front of the camera, and wish our viewers a Merry Christmas to the soundtrack of a cheesy canned holiday medley. Okay, that’s it then, I’d had experience. I was ready!

Channel 5 was even going to send a car for me! Now you can imagine the vision of a limo with a mini bar and a complimentary masseur (preferably bare-chested with pecs of steel) that went through my mind. They were going to send somebody to prep me en route, the email said. I felt like Jane Bond.

Didn’t happen … Did not happen. After several hours of waiting for the Blackberry to ring, I got a call from an apologetic Monica – Jessica’s 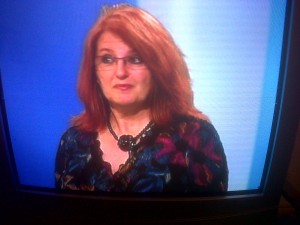 Me at some point during my 2.5 minutes of fame.

assistant – saying they didn’t think they could get a car out my way and get me back through the rush hour traffic in time for the newscast. Would I mind taking a train, I was asked in a small voice. Hell, I’d planned to take a train anyway, so no I didn’t mind — though I really was looking forward to that masseur.

Then Monica handed the phone over to Nick, a news editor, who talked me through what I could expect — not very 007 at all, but still, it’s always fun to talk about smut. After I said good-bye to Nick, I was off for the train station WAAAAY early because, well I have a phobia of being late, and I always allow EXTRA time — specially for my national telly debut.

The Northern and Shell Building, the home of Channel Five offices, is an ultra-modern, tinted glass tower just a block or two from Monument. I signed in, was handed a nametag and told to sit and wait for Fay, who took me upstairs where she showed me a small roped-off area right in the middle of the hive of activity that was the news room. Inside there was a control panel on a trolley and squat, boxy camera that looked like it might double as fabulously creative torture implement in some well-equipped dungeon. In front of the torture camera was a chair just waiting for moi.  Gulp! I was going live remote, all sat there in front of the camera talking to the voice in my ear, a voice only I would hear. Not that I don’t do that from time to time anyway, but never on national television! I wasn’t even going to talk to a real person.

Fay left me sitting at an empty desk next to the torture cam to contemplate my fate while she went in search of coffee. She was gone for a long time. I thought maybe she forgot about me. I just hoped at some point someone would remember that I was there.

With about thirty minutes before air time, Fay came rushing back to the desk where I sat and said the powers that be wanted me in the OTHER studio over by King’s Cross! She then rushed me downstairs, crammed me into a taxi and gave the driver instructions to an address completely unknown to me. Then we race across London to my new destination … Through grid-lock. I think I could have gotten out and ran faster. Except I didn’t know where to run to.

Strangely as the minutes ticked away I found myself getting calmer and calmer as the realization hit me that there was absolutely NOTHING I could do. We would either get there in time or we wouldn’t. I spent the ticking minutes frantically texting and emailing Raymond and Lucy Felthouse and Kay Jaybee, who were all holding my hand remotely, so to speak, and cheering me on. I didn’t know until much later how many other people were cheering me on. I’m still amazed and touched by the outpouring of support.

We arrived at the studio with me climbing into my nosebleed shoes, throwing some money at the wonderful taxi driver, who got me there against all odds and running into the building.

With less than five minutes before my segment was to begin I was thrust into the green room, introduced to Emma Crosby, the anchor, during a commercial break, miked, told not to use bad language and not to be rude, then shoved onto the stage just as the video tape accompanying the segment I was in came to an end.

When my 2.5 minutes were up, I was ushered off the stage, unmiked and escorted to the lobby where I was pointed to the nearest tube station, at my request. I’m sure someone would have called me a taxi, but I’d had enough taxis for one day.

I changed back into the Hedgehogs and walked to King’s Cross in a daze. It had all happened so fast, I wasn’t even sure it actually HAD happened. I emailed to say I’d survived the ordeal, then headed home. Raymond picked me up at the train station, took me home and fed me. 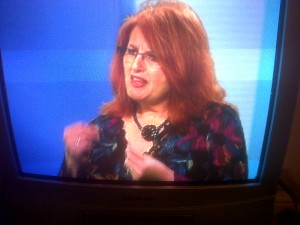 While I ate, I watched the recorded version of me talk to Emma Crosby about erotica on national TV, like it was something I did every day! It was then I realised that I wasn’t really given a chance to get nervous, in the midst of all the chaos. And sure enough, there was a shoe shot! My feet looked very well dressed, indeed, not as well dressed as Emma’s, of course, but then she WAS the anchor.

After it was all over, and I was settled with a glass of wine reading over Facebook and Twitter conversations about my adventure with Channel 5, I was even more amazed at what had been going on while I was in a taxi struggling to get to my 2.5 minutes. I was astounded by the support of the fabulous community of erotica writers of which I’m a part. The excitement, the well-wishing, the feeling of everyone rooting for me, and the message I was sharing reminded me again of how much we all really believe in what we’re doing. We’re making positive changes in attitudes toward sex. We’re celebrating and reclaiming one of the very best parts of what it is to be human. And wow! That’s so worth believing in!

It was hours before I finally got to sleep, as I played the whole experience over in my head – all of it from the first email from Channel 5, to me looking excitedly over twitter conversations that were going on while friends and fellow smutters were watching me on telly. I’m still trying to take in the whole experience, and I know this may sound strange, but my actual 2.5 minutes was only a small part of the whole. I’m so glad to be a part of something so vibrant and edgy and in-your-face that it burst onto nationally telly proud and naughty and sassy and just getting started!

I woke up the next morning to discover that thanks to my dear friends, Kevin Mitnik, scheming with Lucy Felthouse, the segment was up on youtube. They wanted to surprise me. And it was a wonderful surprise! Thanks lovelies!  You’re the best! Here’s the link if you haven’t seen it yet. http://www.youtube.com/watch?v=eBYornouDXI&feature=youtu.be

I Made My TV Debut!