The Psychology of Dreams 101 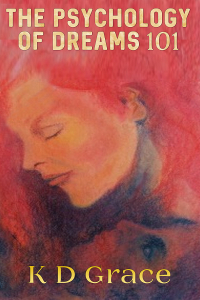 What if there was punishment when you didn’t dream the right dreams? That’s the dilemma Leah Kent, and her professor, Al Foster must face—dream right, or take the punishment. The Psychology of Dreams 101 is a wander into the sexy and dark unconscious as Leah takes a Psychology of Dreams adult education class, only to discover that the required dream journal leads to some seriously kinky night journeys. But not all dreams are pleasant ones, and some have far-reaching repercussions in the waking world.

That was the first sentence; that was how it all started.

Leah thought it might be some sort of lucid dreaming when she saw the words scrawled across the page of her open journal on the nightstand. She’d had every intention of asking her instructor about it, but then she couldn’t really tell him the dream that had brought it on, could she? It sounded like the sort of thing the unconscious of a pathetically shy introvert would write to herself from the dream world because she had no one in the waking world to say it to her and, while that might be true—the pathetic introvert part, she didn’t want to make it more obvious to her instructor than it probably already was—especially when she had half a crush on him.

Besides, it also sounded like the sort of thing a sex-crazed slut might write to herself when her vibe batteries ran down. That made her sound even more pathetic—the vibe and the batteries part, not the slut part.

She had just started a course on the psychology of dreams. She tried to take advantage of adult education classes whenever possible. It got her out of the house and forced her to interact with other people—real flesh and blood people. With her job, online shopping, online banking, direct debit, grocery delivery, she never had to leave the house really, and that suited her just fine, but she knew it shouldn’t. She knew it wasn’t healthy. Sometimes going to the classes was more of an ordeal than a pleasure, but that was not the case for the psychology of dreams class.

She had to admit, she’d taken that course because she’d overheard several women giggling and talking about how hot the instructor was and how their dreams had become very sexy since they’d started his class. A part of the class work was to keep a dream journal. The women had been sitting at the table next to her in the coffee shop poring over their journals together and laughing about how they thought Al—Al Foster was the instructor—would respond when he read their dreams. She’d been taking a photography course then, and it had been one of the few times Leah had actually forced herself to initiate conversation, asking the women about the class. They were only too happy to share, and soon she was laughing and blushing and joking right along with them as they told her all about the psychology of dreams course and how it had truly stimulated their dream life. The next term, she signed right up.

A dream journal—that had sounded simple enough when Al—he’d insisted they all call him Al—had explained what it was. All she had to do was write down her dreams every morning when she woke up. But by the time she sat down at the breakfast table with her bowl of cereal and her coffee, dream journal and pen at the ready, she could remember nothing but bits of broken images—nothing dramatic, nothing with hidden psychological meaning—certainly nothing sexy.

After a week of drawing blanks from the dream world, Al had helpfully suggested that she keep the journal open by her bed, and that she set an alarm for every two hours. When the alarm went off, she was then to write just a few key words of what she remembered, words that would jog her memory in the morning.

The second alarm, she must have unconsciously shut off before she got fully awake, but on the third, she managed a little dream snippet about chasing a big dog through the local McDonalds, a dog who had shamelessly stolen her Big Mac right out of her hand. She hated Big Macs, and big dogs made her nervous. Well, that was at least something to analyze, wasn’t it? Though Freud had insisted that sometimes a cigar was just a cigar, surely that didn’t hold true for Big Macs, which she didn’t like, and big dogs, which she didn’t trust. Al would be pleased.

The second night there was a dream about a leather jacket with a huge snake for a collar, a snake that talked—kind of like a parrot. There was a dream in which she’d gone to the supermarket and ended up in a maze, unable to find her way out. There was a dream of planting begonias in front of the convenience store around the corner. For the rest of the week, she was excited to see that the setting of the alarms was working. Her key words helped her to remember details, and the rest was easy.

Buy The Psychology of Dreams 101 Now