The Mammoth Book of Hot Romance 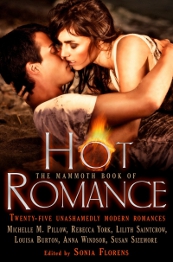 JAKE ANDERSON may look like the Greek god, Apollo, but he is really an innocent, teaching English before going off to seminary to fulfill his family obligation. Struggling young artist, DONNA JENKINS, works at a strip club painting a mural of a Roman orgy on the ceiling. Times are tough, and funds are short, so against her better judgment, Donna rents a room to Jake. While she surreptitiously sketches Jake for her paintings, his desire for her finds him contemplating difficult career choices. Complications set in when they suspect their sudden source of inspiration might be the fabulous sex they shouldn’t be having, but can’t seem to resist.

Sleep, when it finally came, was laced with dreams of Apollo and Daphne, of Leda and the Swan. In the early hours just before dawn, she woke to the sound of running water. It was pretty inconsiderate of his holiness to shower at this hour. Cursing softly to herself, she threw on her robe and stomped down the hall to the bathroom, where she found wafts of steam floating through the open door.

The surprise barely had time to register when the water stopped running, the shower curtain drew back and there he stood like Apollo just up from the sacred baths.

“The shower woke me.” She forced the words through her tight throat, struggling not to let her eyes go exploring, “I couldn’t sleep.”

He seemed not to mind his nakedness or her inability not to notice. The bathroom floor creaked anxiously beneath his feet as he stepped from the tub, moving with the regal grace of a god, brown eyes locked on hers. His hands came to rest on the sagging lapels of her robe, and over the scent of deodorant soap, she breathed in the wood smoke tang of male arousal. Her nipples stiffened against silk as she realized he wasn’t the only one who was wet.

That wasn’t right. Why would Apollo be quoting Song of Songs?