Love Under the Mistletoe 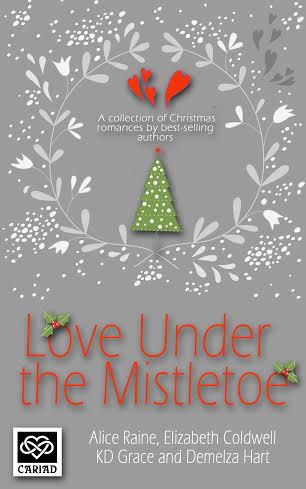 ‘A Valentine for Christmas’

All work and no play, bah humbugging CEO, Gerard Jasper’s, anonymous Christmas gift is actually a Valentine — Moira ‘R.M.’ Valentine, the mysterious CEO of the Valentine Corporation. Moira’s walk on the wild side has accidentally landed her naked and bound with red ribbon under Gerard’s tree – not good when their companies are negotiating the deal of a lifetime. When two lonely people with enough baggage to fill a 747 come together for Christmas, the fireworks rivals New Years at Times Square, but can they overcome their pasts to give each other the true gift — a merger of hearts?

‘What the …’ Words died in Gerard’s mouth as he lowered his arm and dropped the poker against the chair. He blinked twice then rubbed his eyes. Surely he still had to be dreaming. Though this dream beat the hell out of the usual drowning dream. There was another moan and, as his eyes adjusted to the light, he realized it came from the woman lying on her side under the tree. She was completely naked except for the red velvet ribbons that seductively bound her wrists and her ankles. The only other thing she wore was a sprig of mistletoe pinned in the muss of thick dark hair that fell over her shoulders partially obscuring breasts that were obviously full enough to balance the rest of a figure that curved dangerously in all the right places. Even in that confused post-wake-up state, Gerard’s cock got the picture just fine, thank you! But what the hell was a naked woman doing tied up beneath his Christmas tree?

Before he could ask, the woman moaned again – louder this time – and doubled over as though she were in pain.

‘What is it? What’s wrong?’ He asked, dropping to his knees, forgetting the fact that this chick had invaded his privacy.

‘Oh, God!’ She gasped. ‘It’s my leg. I have a cramp. In my left hip and it’s making my butt numb.’ She bit back a curse that he was pretty sure would have curled his hair if she’d let it fly. But he figured perhaps she was on her best behavior – red ribbons, mistletoe and all.

It was then that both he and his cock remembered, at exactly the same time, that she was tied up. He was in complete control. He settled on his haunches and folded his arms across his chest. ‘What the hell are you doing here?’ He asked.

She moaned again and tried to shift to a more comfortable position, which made her breasts bounce and her hair slide away to reveal nipples darkened and stiff atop goose-fleshed areolae. ‘I’m your Christmas present.’He blinked. ‘My what?’

‘Christmas present? You know, happy holidays, noel, peace on earth … ouch! Oh hell that hurts.’ She hissed between barely parted lips and writhed in a way that should have made him sympathetic, but only made him hornier. ‘Could you please untie me so I can take care of this cramp.’

Buy Love Under the Mistletoe Now