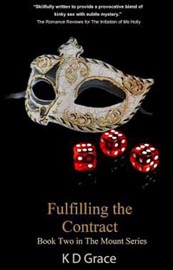 Elsa tossed the headset back onto the dressing table and rubbed the back of her neck. ‘Mr Chase, unless you want to fulfil Tanya’s contract for her, this conversation is over. It’s been a long day, and I’ve had enough. Pagan will escort the two of you back downstairs and since Tanya no longer works for me, I don’t care if you fuck her brains out. Now if you’d –’

Suddenly all eyes were on him. ‘Tell me what to do and I’ll fulfil the contract for her.

Tanya gave a little yelp that sounded like a kitten in distress and Elsa laughed out loud. ‘Mr Chase, you don’t even know what Tanya’s contract involves.’

“This story just keeps surprising you, the characters are great… intrigue, excitement, a soupçon of romance, and a bad guy. What’s not to like. It was an amazing experience to read, and I think this book is not just five stars, it’s must read as well.” 5 out of 5, Kinky Book Klub