Dark Desires: Love That’s Out of This World 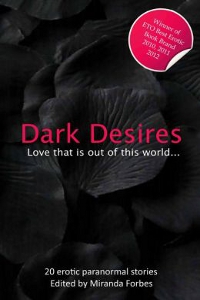 Mick gripped the arms of the chair with white knuckles. ‘Your website said you specialize in sex magic.’

‘Love spells aren’t necessarily sex magic.’ She crossed long legs and smoothed the flounces of a burgundy gypsy skirt over shapely thighs. She was a far cry from the old hag he’d expected.

‘But you don’t understand. Darlene isn’t like other women. I believe – no I’m certain – we’re meant to be together.’

Sally moved to stand beside him, taking his chin in her hand, turning his head from side to side as though she were inspecting him for flaws. He thought she had given him a static shock from the Turkish carpet, but the energy coursed through his jaw, down over his stomach to surge in his penis, which suddenly felt tight in his trousers.

‘Have you had sex with her?’

‘When was the last time you had sex with anyone?’ She tightened her grip on his chin. ‘I’ll know if you lie.’

His heart galloped in his chest, but his straining cock didn’t seem to notice the definite frisson of fear that prickled his spine on little spider feet. ‘Three years.’

Buy Dark Desires: Love That’s Out of This World Now