A Caning for the Goddess 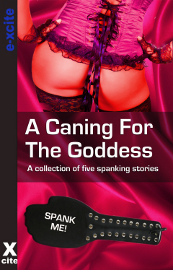 Sadie’s sexual appetite is out of control, and a spell at the Nymphomaniac Rehabilitation Facility is intended to put it right. It isn’t long before fellow inmate Carol is showing her how to bend the facility’s strict rules, earning them both punishments that are more than worth the crime.

It could have passed as a coach excursion through the scenic Surrey Hills, but Sadie knew better. This was her bus to an indefinite period of miserable celibacy, at least that was what she thought when she and three other women stepped off the coach in front of the main wing at the Nymphomaniac Rehabilitation Facility.

They were met by a tall woman dressed in a riding habit and a conservative tweed jacket that failed miserably to disguise her delicious curves. Her dark hair was pulled back in a severe bun. Her boots were polished to a high sheen, and she carried the riding crop under one arm that made Sadie’s heart skip a beat. She certainly hoped the women knew how to use it.

Buy A Caning for the Goddess Now