One of the biggest attractions in the world of erotica is voyeurism. That feeling of being on the edge of 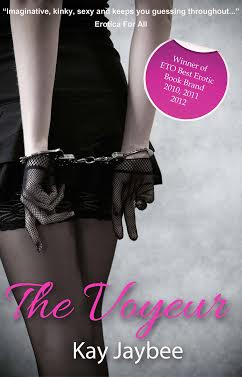 However, it isn’t that story that I’m going to share a little bit with you today- but inspired by the arrival of a circus in my local town this very day, it is my novella, The Circus.

When it comes to voyeurism the there is no location more suitable than one with an auditorium- the theatre, ballet, opera- or perhaps the circus.

As a child I always found the circus a rather sinister place, full of scary clowns, overconfident acrobats, and fake smiles. What better location then, to set a full throttle sexual showcase?

When Carrie’s partner Scott buys her a ticket for the Circus, she isn’t at all sure she will enjoy what she’ll see. An uncertainty that jumps to fear, when the strict, whip wielding Ringmaster calls out Carrie’s ticket number, and she realises she isn’t going to have to simply watch- she is to be the subject of the bondage and punishment spectacle to come. What the hell will her boyfriend say? And where is Scott anyway?

One hundred quid a ticket!

Carrie still couldn’t believe Scott could afford to pay so much to secure her a seat in the small, run-down theatre.  It wasn’t as if she was even guaranteed any action.  Everything was deliberately uncertain.  But then, as he had assured her, that was part of the attraction.

Perspiration was dotting down the back of her neck, and the more Carrie thought, the more she wondered if perhaps she didn’t actually want anything to happen.  That it might be better just to watch, better not to win the lottery that would change her from being a mere observer of events to a prime player in the evening’s entertainment.

Even though the room was packed, every thinly covered velvet seat taken, no one looked at anyone else.  No one regarded their neighbour.  No one gave a friendly smile of greeting as they waited for something to happen.  All eyes were focused towards the stage.  There was a hushed buzz to the neglected theatre, as if the ghosts of a thousand performances had been trapped within the walls.

In the centre of the stage sat a collection of left over props from dramas long past.  At first glance it appeared to be merely abandoned clutter, but as Carrie examined the items more shrewdly, she began to suspect that everything had been carefully and cleverly placed.

An oak coffee table and bench supported two legs of an iron-framed double-bed, which was devoid of either linen or mattress.  Next to the sloping bed, heaped to the left side, a pile of old wooden chairs were haphazardly stacked.  On the opposite side was a fallen umbrella stand, apparently tipped over

by the weight of the walking sticks, canes, and what Carrie suspected were Victorian style shooting sticks.  She felt her pulse quicken.  You didn’t have to be Einstein to work out what that lot could be used for.

Carrie could feel the heat of her skin prickle beneath her chestnut ponytail.  She sat wishing that

When Scott had told her about The Circus, the new show that had taken over the city’s long empty theatre, Carrie had thought it really was a circus.  A family show with clowns, scantily clad acrobats, and the odd juggler.  She had, to his amusement, waxed lyrical about how much she’d loved the circus as a child.  She was soon disabused of her naivety.

Increasingly aware of the clammy sheen of nerves on her palms, Carrie still wasn’t quite sure how Scott had talked her into coming here without him.  But her curiosity had gotten the better of her, just like he’d known it would.  He had insisted that, with her private personal preferences, she would be in her element having her bum smacked in front of a select group of eroticists.  Carrie wasn’t so sure.  Having her ass roundly whipped by Scott in the sanctity of her flat while he ordered her to crawl around the floor was one thing — but this was different.  This was voyeurism on speed.  The almost animal gleam to her lover’s eyes however, when he told her how much he was looking forward to a blow-by-blow account of her experience, added an extra dimension to the tingle of fearful anticipation that played in her stomach.

“Ladies and gentlemen,” a gravelly masculine voice bellowed over a speaker system that crackled from the effects of dust and lack of use.  “Welcome to The Circus.  I would ask you all to abide by your hosts decisions, and only mount the stage if and when you are invited to do so.  Sit back and enjoy.  It’s show time!!”

There is no denying the attraction of stories with voyeurism as their base. The basic curiosity within so many of us makes it a salacious idea – the thought of might we might see if we were  to peer behind closed doors, or peek  through that key hole- especially if we have the sneaky feeling that those within secretly want to be observed….DELICIOUS!!

Many thanks once again to the wonderful KD Grace for letting me visit her site again today!!

One Response to “Voyeuristic Fun with Kay Jaybee”