Tina Donahue Takes Us Away

I’d like to welcome the lovely Tina Donahue to  A Hopeful Romantic today. Tina  is going to give us a sneak preview of her hot new novel, Take Me Away. And just to celebrate that release, she’s offering a juicy giveaway too good to miss out on. Tina, do tell! 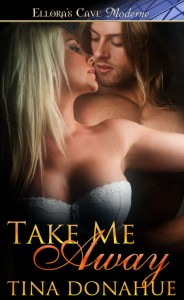 Don’t you love the beginning pages of a romance when the hero and heroine first meet? Their smoldering stares, their first words as they size up each other?

I do. That’s one of the parts I like to write most. When neither character quite knows where this might be heading…they just know where they would like it to go.

Usually during these encounters, we – the readers – get to know the characters better, to fall in love with them as they begin the journey of falling in love with each other.

Here’s a blurb and an excerpt to show you what I mean.

She’s everything he escaped…and all that he desires

Three years ago, Kyle turned his back on a pro-football career and being the target of tabloids or gold-digging groupies. Craving privacy, he gets it at his roadhouse in Northern California until Lexi Sands invades his life. Indulged and surely phony, she’s exactly what Kyle fled.

An actress since childhood, Lexi’s fresh out of an anger management program, court-ordered when she lashed out at a badgering paparazzo. Weary of the press’s harsh scrutiny, she sees Kyle’s secluded cabin as the ideal place to hide out and him as a damn-near perfect alpha male. Deliciously virile. Protective. Principled. She offers him serious cash to let her stay for two weeks, assuring there will be no complications or touching.

Yeah, right. Passion flares, along with tenderness. Kyle recognizes how lonely Lexi really is, while she’s falling hard. Through intimate days and impassioned nights, they explore their most shameless needs, until a cruel betrayal exposes their growing love, forcing a choice neither anticipated.

Lexi caught his scent, more pronounced this time, delivering a hint of musk. Something needed and desired coiled within her, despite the fact that they’d just met.

A moment passed. Papers rustled as though he was moving or reading them, keeping himself busy, avoiding the inevitable, turning her down.

Lexi’s longing remained even as reality kicked in. Fiona’s plan to help her hide out had been kind, but unreasonable. At least for Kyle. He had a life he enjoyed. He didn’t want her presence and celebrity to screw it up.

Steeling herself for the worst, she opened her eyes.

He was leaning against the edge of his desk, arms folded over his broad chest, feet crossed at the ankles, his gaze on her.

A pulse beat crazily in Lexi’s throat. The sound of her thrumming heart drowned out the puppy’s thin whines and the muffled noise coming from the bar. She expected Kyle to look away as he had in there. He did not. Once more, interest flashed in his eyes – or at least she thought it did.

Remember, her counselor had said, what you want isn’t always what a person is willing to give.

Tell her something she didn’t know. For as long as Lexi could remember, she’d wanted a home life like other kids had. Parents that adored her because she was their child, not for the income she could bring in.

Even after all these years, the truth still wounded. Refusing to let it defeat her, she made her voice light. “So when did you?”

Kyle’s expression went from intent to confused. “When did I what?”

She smiled at the puppy licking her fingers. “Get Baby here.”

His gaze dropped to the dog, then returned to her. “Buddy.”

Pride and contentment rippled through Lexi for having caused it. For having brought back those killer dimples. God, how she enjoyed seeing them and listening to his laughter. So easy and free. So intimate.

A kiss, a fuck, couldn’t compete with a man and a woman sharing a laugh. That’s what bonded two souls. Joy. Happiness. Friendship. Not mere lust.

A second ago, she’d been willing to leave without a goodbye. Now, she wanted to stay, even though she knew Kyle would never like her as deeply as she required. Lexi saw it on his face, in the way his laughter wound down and his dimples disappeared.

Didn’t matter. For a few days, no more than two weeks, she longed to be around a man who couldn’t care less about her fame, who didn’t want to use it to further his own interests. She ached to get away from the craziness, the pain, the loneliness of her world.

“Before you say no, I’m willing to offer five thousand dollars.”

She was being too needy. Something else her counselor had warned her about. “Okay then, three.” She smiled. “Are you always this easy to negotiate with?”

Kyle’s gaze settled on her smile. His expression became heated, all male.

This time, Lexi knew she wasn’t imagining it. He did find her interesting. The real Lexi, not the tramp she looked like tonight or the Hollywood invention. She saw that truth in his eyes. Excitement raced through her, but she kept it from her voice. “I won’t be in your way at all. I’ll stay in my own room. I’ll only leave it when you’re here or wherever else you may go. I’ll amuse myself outside.”

His gaze turned inward as though he were trying to imagine such a thing. Whatever his thoughts conjured up, pleasure relaxed his features.

Now she had him. “I’ll even take care of Baby for you. I’ll act as his sitter.”

A smile tugged at the corner of Kyle’s mouth. Not enough to make dimples, but surely enough to arouse. “Buddy,” he corrected.

“Sorry. I forgot. Buddy Baby.” Giving the puppy a kiss on his snout, she lowered him to the floor, pushed to her feet and advanced.

At his office chair, Lexi stopped. With her right foot on the seat, she slipped her hand into her boot.

Kyle stared at her naked thigh. Her skirt was so short the damn thing practically exposed her ass. From his vantage point, he could see she wasn’t wearing regular panties. Whether she had on a thong was debatable.

His mouth went dry. He pulled in a deep breath, which rewarded him with her alluring rose scent.

I won’t be in your way at all, she’d said. I’ll amuse myself outside.

With those words, he’d pictured the creek behind his cabin. Lexi shedding her clothes and boots on the bank. Sunlight caressing her nudity. The water swirling around her sleek thighs, dampening her bush, licking her cunt. Beads of moisture clinging to the soft swells of her breasts, dripping off the tips of her nipples.

A groan of pleasure and frustration bubbled up. Kyle fought it, remaining silent, not daring to ask what in the fuck she was doing. Adjusting her sock? Removing a rock that had somehow gotten into her boot and was hurting her foot?

His guesses weren’t close to correct.

She pulled out a wad of hundred dollar bills.

In the coming moments, they learn quite a lot about each other, which stokes their interest and passion.

Take Me Away is Available Now!

To celebrate the release of Take Me Away, I’m offering a contest today. One lucky commenter will have her choice of one of my following ebooks**:

Thanks for stopping by, Tina. Take Me Away sounds hotter than hot! And personally, I don’t know how the lucky winner is ever going to choose between these delicious offerings!

19 Responses to “Tina Donahue Takes Us Away”