The Tutor Now Available for Preorder 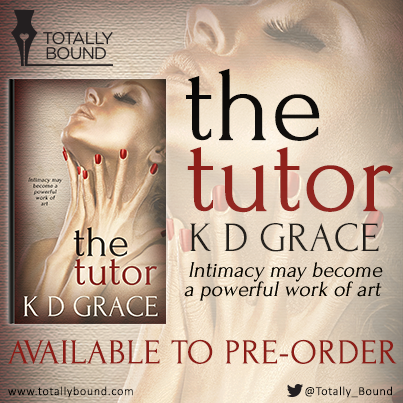 The Tutor is now available for preorder!

There’s much rejoicing and happy dancing at Grace Manor! Who knew that a workshop writing prompt of a can of pears in heavy syrup and a mysterious summon to the storeroom of the local grocery store could lead to a full-length novel only a short month and a half later. Yup! That was the strange inspiration for The Tutor, and now less than a year after Kay Jaybee’s fabulous writing workshop at Smut Manchester inspired me, the novel is officially available for pre-order on Amazon and at the Totally Bound website, proving that sometimes when things go pear-shaped, it’s a good thing.

Now’s your chance be the first on your block to learn how a tin of pears changes the world forever for reclusive sculptor, Alexander ‘Lex’ Valentine and Kelly Blake – a struggling writer secretly moonlighting as a sex tutor. Here’s the blurb! Here are the links! And here is a sexy excerpt! Read! Enjoy! And pre-order the whole sexy, romantic read – pears and all!

Struggling writer, Kelly Blake has a secret life as a sex tutor. Celebrated sculptor and recluse, Alexander ‘Lex’ Valentine, can’t stand to be touched. When he seeks out Kelly’s advice incognito, the results are too hot to handle. When Kelly terminates their sessions due to what she considers her unprofessional behavior, Lex takes a huge risk, revealing his identity to her at a gala exhibition, his first-ever public appearance. When Kelly helps the severely haphephobic Lex escape the grope of reporters and paparazzi, rumors fly that the two are engaged, rumors encouraged by well-meaning friends and colleagues. The press feeding frenzy forces Kelly into hiding at Lex’s mansion where he convinces her to be his private tutor just until the press loses interest and she can go back home. They discover quickly that touch is not essential for sizzling, pulse-pounding intimacy. But intimacy must survive the secrets uncovered as their sessions become more and more personal.

He was no longer avoiding her gaze. His eyes were locked on her, and he was struggling to keep them on her face, she knew that; she understood the urge for him to drop his eyes to the place of which she spoke, the place with which she was so intimate, the place that couldn’t help but respond to the topic, to the situation, to the strange intimacy they had shared almost since the moment they’d met.

“You can look, if you want,” she opened her legs so that he could see the place in between clothed in black denim, completely disguised and yet so very obvious. “And I’ll look at you too,” she nodded down to his own jeans straining to contain him already. “It’s what men and woman are naturally inclined to do when there’s a sexual attraction.”

“What do you like?” His words were a labored rasp against the back of his throat, and

Kelly found herself stunned by the question, and way more aroused than she wanted to be. He shouldn’t have asked. She should have answered. But she did.