I’m very happy to have Lindsay Townsend at Hopeful Romantic to share a little of the truly fascinating story behind the story of her exciting novel, To Touch The Knight. Welcome, Lindsay! Do Tell!

In my novel, the heroine Edith presents herself as a strange princess with her own seductive costumes, language and customs. One of my inspirations for this particular desperate deception was a real-life fake from the eighteenth century, the Princess Caraboo.

This ‘princess’ was a young woman who appeared in a Gloucestershire village in 1817, dressed in unusual clothes and speaking a strange language. Upon investigation by the local magistrate, it was discovered she called herself Caraboo and later a sailor said he knew her language and translated her story. Caraboo claimed to be a princess from an island in the Indian ocean, who had escaped after being captured by pirates.

The magistrate, Stephen Worrall, and his wife, took in Princess Caraboo. She lived with them for several weeks, famous and fêted by the local community.

In reality Princess Caraboo turned out to be Mary Baker, the daughter of an English cobbler. When the hoax was revealed due to her picture in the ‘Bristol Journal’ being recognized, the Worralls arranged for Mary to leave for Philadelphia.

Mary did go to America but returned later to England and died there. It was the story of her unusual deception that inspired a 1994 film, ‘Princess Caraboo’ and partly inspired my own novel, ‘To Touch The Knight’.

Taking the story of Princess Cariboo as a starting point, I wondered how it would be if a woman felt compelled by circumstances to undertake a similar deception, in the Middle Ages and with far higher life-and-death stakes, and so Edith was born.

My hero Ranulf  also has his own inner demons to defeat through the story. He is a fighter who must come to terms with his grief at the death of his wife and also a mystery surrounding her death. When Edith and Ranulf come together, they are both in different ways lost souls who find themselves through each other. It’s set against a period of massive trauma and change, too – just after the Black Death of 1348.

The so-called ‘Black Death’  was  known during the Middle Ages as either the plague or the pestilence. It’s now believed there were two main types of plague – bubonic (in which sufferers presented with huge pus-filled tumors or buboes) and pneumonic, spread in the air, which killed in less than three days. Both struck Europe from the far east in 1347, spreading swiftly from Italian ports through Europe and arriving in Britain in 1348. There was no known cure for any of the plagues and over a third of the population died. It was a terrifying time, made worse by the common belief that the disease was a judgment of God.

It was a dreadful time, but for the survivors it was also a chance to better themselves, particularly for peasants, for farm labor was in short supply. Edith decides to use the chance in another way, in order to save herself and her fellow villagers.

Thank you so much for having me today, KD! 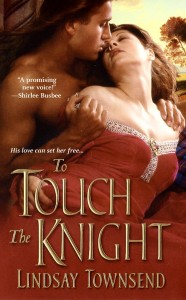 I’d like to leave you, if I may, with the blurb and an excerpt from the first chapter of my novel, ‘To Touch the Knight’.

As a pestilence sweeps medieval England, a low-born woman has only the sharpness of her wits–and the courage of her heart…

Edith of Warren Hemlet plays a dangerous game. At the knights’ tourneys across the land, among the lords and ladies, she is a strange foreign princess. But in the privacy of her tent with the other survivors of her village, she is but a smith’s widow with a silver tongue. They are well-fed, but if discovered, the punishment is death. And one knight–fierce, arrogant, and perilously appealing–is becoming far too attentive…

Sir Ranulf of Fredenwyke cares little for tourneys: playing for ladies’ favors, when his own lady is dead; feasting, while commoners starve; “friendly” combat, when he has seen real war. Still, one lady captivates him–mysterious in her veils and silks, intoxicating with her exotic scents and bold glances. Yet something in her eyes reminds him of home…and draws him irresistibly to learn her secrets…

And here’s an excerpt from the first chapter, where Edith encounters Ranulf for the first time:

Edith was walking with the bundled sheets to the shallow, slow-moving stream when she realized that another was there before her. A man, big and muscled enough for a knight but not in armor, was sitting on the river-bank with his boots off, dangling his bare feet in the clear water.

Large, fine feet they were, too, and very clean. She stood in the shade of a young beech tree, shielded by its fresh leaves, and watched him; this nameless knight. He was new to her, and a pleasure to look upon, with a trim waist and good shoulders. He slowly kicked his legs in the water and she noticed the dark swirls of down on his calves, less lustrous and straighter than his fair-going-to-russet shaggy, badly-clipped hair. She wondered if the tiny dark fish were nibbling his ankles and laughed softly at the foolish idea. He was handsome, she conceded, if long, clean-shaven features as regular as a mason’s new carving of a king were to one’s taste – and they were to hers. On his feet, standing proudly on the daisy and speedwell studded grass, he would be tall as a castle keep, but wiry, with a rangy strength she admired when he skimmed a pebble across the river.

Here’s where you can find Lindsay:

Thanks for stopping by, Lindsay!  It was lovely to have you. ‘To Touch The Knight’ sounds like a fabulous read — even more so now that we know the story behind the story.  I’ll now be waiting anxiously to July to get my copy!

Sizzling Summer Reads Heat Up The Romance Review, and Holly Will Be There → ← Still Behaving Like Animals