The Secret’s Out, and it’s FREE! The Secret Life of Pets that is!

As a great beginning to the new year, I’m very excited to announce another FREE taste of my critically acclaimed novel, The Pet Shop! Alongside the original novel, The Pet Shop is now being offered by Xcite in a limited Kindle three-part edition. The second part, The Secret Life of Pets, is once again available for FREE for five days on Amazon from the 16th of January through the 20th. And, since Xcite is only too aware that Pets are addicting, to help feed your addiction for hot kinky romance, Part One, The Gift, and Part Three, The Taming, are just £.77 each in the UK and $1.19 in the US. 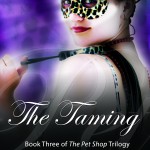