The Executive Decision Box Set: A Bargain of a Book Binge! 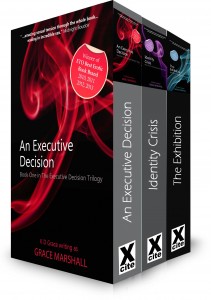 I’m very excited to announce that if you like romance with a twist of suspense and a whole lot of sizzle, then you’ll want to grab up your copy of The Executive Decision Box Set now!

The Executive Decisions Box Set includes the first three novels of the trilogy. That’s three full-length novels to heat up your UK summer at 99 pence, or to make you US summer sizzle at $1.54

In The Flesh Part 5: Free Story in Progress. Enjoy! → ← Before the Rain By JoAnne Kenrick
© 2022 K D Grace
Site created and maintained by Writer Marketing Services