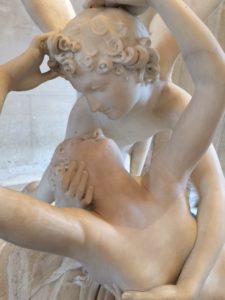 Yes, I admit it openly! I’m an HEA sort of girl. I feel like I’ve been cheated if I don’t get that happy ever afteror at least a happy for nowat the end of a novel or a series. Yes, I expect losses, and yes I expect a journey that is fraught with chaos and nail-biting setbacks, but I do expect a pay-off for sticking with the author to the end.

If there isn’t an HEA, well I can live with that as long as the tale is redemptive. But take away the characters’ hard-earned HEA and their redemption arc and I will throw the book in the trash, or delete it from my kindle and never read that author again. Totally not acceptable in my sight!

While I get that sometimes the cost of the tale being told is way too high for a proper HEA, while I get that people suffer and die and things go tits up and pear shaped, I cannot, CANNOT except a tale that ends with no intimation of redemption. Perhaps it makes me a sappy git, but I believe redemption is essential to the human condition. If that were not the case, I figure the human race would have died out a long time ago from the total lack of hope.

I often find myself thinking about the redemptive arcs in my own stories. Not only are they there in every single tale, but they are absolutely essential for the HEA to happen. While a redemption story does not necessarily involve an HEA, in my opinion for an HEA to be worth the read, a redemptive arc leading up to it is crucial. Without it, the story is flat and, worst of all, it becomes something with which people in the real world cannot identify.

The sharing of stories is quite possibly the best form of escapism ever created, with reading fiction the ultimate refinement of that great escape. We read, and write stories to experience vicariously the journeys we can never make on our own, nor would we even want to if we could. And while that is true, the one thing that we do want to believe in, need to believe in, the one thing that we want to take for ourselves from each story is a sense of hope, without which there’s very little reason to journey farther.

Through the stories I’ve written, my characters have taught me several valuable lessons about redemption.

First of all, redemption doesn’t mean forgiveness. Some things cannot be forgiven, nor can they be undone. That means one of the very fist steps to redemption is letting go of the past those characters can’t change and moving forward to the future they can.

Secondly that moving forward instead of being stuck in the past and its hopelessness is often the opening of ones eyes to see things differently, a different view of what has been and how it affects the present makes for a much different view of the future and the possibilities awaiting the character.

Thirdly while the literal definition of redemption is the buying back of a thing, in fiction the currency is character struggle. What is purchased at a very high price is hope bought back from hopelessness. It’s not so much the hope that one might be made new again nor is it the pipe dream that what has happened can be undone, because certainly it can’t. But redemption is the moving forward on a different path that leads away from despair and toward hope, no matter how distant that hope may seem. It’s the understanding that while one can’t undo what has been done, one can move forward in hope and impact the world in a positive way, or at least not a negative one.

Fourthly, once the U-turn into hope is made, the journey is only just beginning. The characters’ flaws don’t magically vanish, the brokenness is not suddenly mended and the journey is more than likely going to be one helluva a ride. But it’s a ride worth the effort. It’s a ride worth waking up for every morning. That sense of value, or at least that sense of not being worthless, that sense of moving toward something that matters is a key ingredient in the redemption of a character.

Finally, sex in a story can play a major role in that redemptive arc. Sex can work as the drug that keeps hopelessness at bay and keeps a character numb or in denial. It may be nothing more than a distraction from the pain of that hopelessness, but in story it’s a powerful distraction and one that can convey to the reader the depth of the character’s hopelessness in a way that’s raw and honest, even in its dishonesty.

But sex in the redemptive arc can also lay a character bare, render a character open and vulnerable to that U-turning, to that possibility that hope might not just be something for other people. That sense of union and oneness that can happen with sex can be a part of the guiding force that brings a character back to himself, that reconnects him with all that matters, all that has been lost.