Smut Restrained in the Wild or in the Dungeon

I’ve got multiple reasons for being excited about participating in the Smut Restrained Blog Hop today. First off, I adore Victoria and Kev Blisse, and I’m always happy to participate in an event they sponsor. Second, my very naughty, very al fresco m/m novella, Toys for Boys, which was first published in the Brit Boys with Toys Box Set, is now available for pre-order, and I’m elated to be able to share with you a little restraint al fresco. And third, the fantastic cover for Toys for Boys is the work of the very talented Kev Blisse. 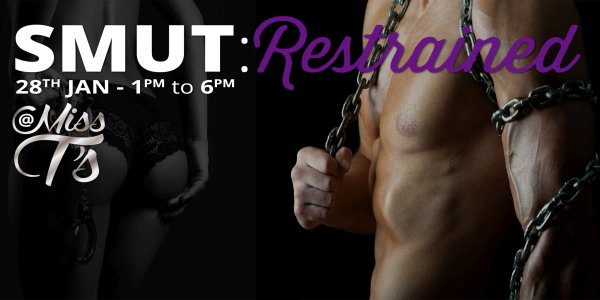 What’s Smut Restrained all about?

If you’re in the Manchester area on the 28th, join The lovely Smut Folks on Saturday 28th January from 1pm -5pm at Miss T’s Dungeon in Stockport.

There will be demonstrations with rope and chains, sexy readings and lots of time to get hands on with the restraints and toys of your choice – bring your own gear or borrow some once you arrive, it’s up to you.
There’s be an experienced rigger on hand to give advice and answers your rope questions. There’ll also be other experienced doms and subs eager to answer any kinky questions you have.

There will be lots of time to play in any way you like using all the facilities of Miss T’s well kitted out dungeon as well as time to socialise too.

Pick up your tickets here:

Tickets cost £5.80 with fee in advance or £10 on the door but please let me know if you’re planning to turn up on the day – I don’t want to have to turn anyone away if we get full! 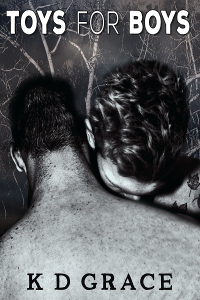 The second day they walked in sunshine. It was another fourteen and a half mile trek, in addition to what they’d not been able to finish the day before. Will seemed no worse for wear. Doc had to admit he was beginning to enjoy the man’s company—not just because of his nice arse or their little exchange this morning, but because he was a good walker. Like Doc, he was comfortable with his own silence, silence which was companionable in the long, indulgent stretches of it they shared on the trail. The man’s pace was good, he never lagged and he never complained. He used his toy effectively and way more subtly than most tourists with cell phones—not counting this morning’s little indiscretion, that is. They’d taken to using the personal pronoun for the smart phone, myBrain, urBrain, even occasionally ourBrain.

At the top of Loft Beck the two looked out across Fleetwith to the ruined tramway track, which led down to Honister Slate mine. He watched Will shooting a video of Buttermere and Crummock Water stretched out in the lazy autumn sun, reflecting the sapphire Lakeland sky like giant mirrors. “The panoramic beauty is quintessential Lakeland,” Will spoke into the device in a low, conversational voice, but made no attempt to hide his excitement. He was saying something about Moses Trod and the old whisky smuggling route.

It pleased Doc way out of proportion that the man had clearly done his homework concerning the places they walked. As Doc joined him near the ruined barbed wire fence, Will turned the camera on him and said something about Doc’s abilities in the outdoors that he couldn’t quite catch, but the smile the bloke offered suggested it was either complimentary or playful. Doc didn’t mind either; in fact, he kind of liked having the device turned on him, being the centre of Will’s attention—as long as he wasn’t naked with his cock in his hand.

They stopped for an indulgent ice cream at the slate mine’s visitor centre before they made the trek down Honister Pass, along the Derwent River and on into the Rosthwaite area, where they set up camp along the river behind a willow thicket that gave them some privacy. It was Doc’s favourite place to camp along the Derwent, but he hadn’t chosen it without ulterior motives, and surely Will had to suspect something when they set up two tents, but used one just for stashing the gear.

Once camp was set up, they shared a pleasant cup of tea, discussing the events of the day. They’d made up the lost mileage and arrived in record time. With the map spread between them and urBrain in hand they spent a pleasant half an hour going over tomorrow’s

dramatic walk to Patterdale, anticipating good weather. When Will went off to the river to get water for dinner and washing up, Doc made his move. He pulled out his Vitronox and cut a slender willow branch about the size and flexibility of a good riding crop.

By the time Will returned with water, he was paring the last of the twigs and leaves, except for the two at the very tip. He had plans for those. Will paused only briefly to take in the situation, then set down the water and came to stand in front of him. “What’s going on?”

“Oh, I think you know exactly what’s going on, Nerd Boy.” He folded his knife and stuck it back in his pocket, then stood and gave the willow switch a good brisk snap against his hand. “I told you this morning it wasn’t over.”

“Are you serious?” Will eyed the switch, then shot Doc an uncertain glance. “You can’t be serious.”

“Couldn’t be more so.” Before the bloke could protest further, Doc caught both his wrists up in a length of lightweight rope he carried with him for emergencies. With the switch in one hand and the length of rope in the other, he led Will—who was either too surprised, or too intrigued to protest—to a young oak and secured his arms so that he was leaning forward embracing the trunk, arse nicely presented.

“You’re not seriously going to…” Will’s voice trailed off into a breathless gasp as Doc gave him a proper pat-down until he found the urBrain in the front pocket, close to a growing stiffy. Oh, this was going to be good.

“Now, let’s see if I’ve been paying attention to your little demos on how to work this thing. Ah yes, here we go. Camera on.” Will had given him the pass code with the idea that he could give a better review if he could see how easy the phone was for a non-techie person to operate. “I’d give this little baby an A-plus for being user friendly,” Doc said. “And it’s important to have a user friendly camera in a place where the views are so spectacular. Now then,” he focussed the urBrain on his handiwork, “you won’t be needing these.” With one hand, he gave the thin walking shorts a hard yank down over Will’s hips and was treated to a gasp of surprise that resulted in a clench and release of the well-muscled arse.

“You fucker,” Will half hissed, half chuckled as Doc manoeuvred the shorts off over the man’s walking boots and kneed his legs apart to offer the best view and easy access, all the while videoing with the other hand, switch gripped under his arm.

“Not yet, I’m not, but I’m hoping. First,” he brought the tip of the switch in between Will’s legs so that the two remaining leaves tickled and stroked his balls. The man jerked, sucked air between his teeth, and his cock surged. “First, we have some unfinished business.” Then he brought the switch up with a sharp snap against those exposed engorged balls.

Doc shoved the camera in his pocket, and moved in. He grabbed the bloke by the hair, pulling his head up to give him a thorough but brutal tongue kiss, to which Will fucking Charles responded by moaning into his mouth, his tongue making for a right nice welcome. Then he gave a harsh grunt and flinched at the sharp thwack of the switch across his bare left buttock, his mouth round with surprise, his pupils dilated with something else. “The more you talk, the more welts your arse gets, and possibly your balls too. So what’s it gonna be, William? Keep quiet and take your punishment so we can get to the good parts?” He gave the man’s cock a hard squeeze. “Or get extra stripes and go to bed frustrated? Besides,” he added, caressing the very fine balls, “I can tell you’re not opposed to a little pain. Now shut up and hold still. I’m anxious to test urBrain.”

Will nodded his agreement and glanced over his shoulder to watch.

Doc pulled out the phone and began to record as the next stripe came down nice and red and raised against the other pristine arse-cheek. “I’m not the photographer you are, my lad, but this is going to be a work of art, if I do say so myself. Your little toy is making my little toy a whole lot more fun to play with. Who knew high tech and low tech could be so… compatible?” He laid three more welts in fast succession across the tense arse, recording its grip and release, grip and release around the mouth-watering O displayed so invitingly at the centre.

“The device has a great microphone, too.” He leaned in again and bit Will’s neck. “All the better to hear you with,” he said, taking in the enticing mish-mash of sounds coming from deep in the man’s thick chest, any one of which might be pain or pleasure. He was surprised to hear that his own soundtrack, laid down next to Will’s, was equally ambiguous and, while he wasn’t experiencing any real pain, there was a good deal of… strain against the fly of his walking shorts, and his balls felt as heavy as river rock.

He shoved the switch back under his arm and went to work on his fly, zooming in for a close-up of Will’s clenching anus pillowed between buttocks latticed with nice red welts. “William, William, William, it’s a good thing you’re walking tomorrow rather than sitting on your wounded bum.”

In response, Will raised up on his toes and lifted his hips, presenting himself like a mare in heat and, fuck, if Doc didn’t feel like a stud ready for service and needing to unload. He gave the displayed balls two light snaps with the switch and then dropped it onto the ground.