Sleazy Bars — A Touch of Grace … Grace Marshall that is

I have a soft spot in my heart for bars, and western bars in particular. No doubt it’s out of that soft spot and the 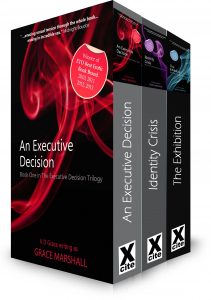 fantasies it spawned that The Boiling Point, the bar in the Executive Decisions Trilogy, grew (Available in a Box Set Now!). The coolest bar I’ve ever been in is Moose’s in Kalispell, Montana, with its swinging wooden doors and peanut shells and sawdust on the floor. The rough wooden booths are carved with the graffiti of who knows how many pocket knives, and there’s always Canadians, Cribbage, and red beer in abundance. For the uninitiated, red beer is beer and tomato juice.

In my childhood, bars always intrigued me because they were forbidden. The bars of my youth, which I was only ever allowed to peek into before my mother would grab me by the arm and drag me away, had wooden dance floors, high stools at the bar and lamps that were adverts for the local beers. There was always a pool table and often several monuments to bad taxidermy. In their early years of marriage my brother and his wife rented an apartment that was attached to a derelict bar in the middle of nowhere on the Colorado and Wyoming boarder. I loved going there because my sister-in-law would let me into the bar to have a spin round and round on the bar stools and do cartwheels and slide in my stocking feet across the hard wood floor. Oh, in case you’re wondering, there’s a fourteen year age difference between my brother and me. I was just a little girl then. Though it still sounds like something I’d enjoy. Looking back, that might actually be the most fun I ever really had in a bar. I suppose Harris Walker is my alter-ego in that.

In Kirksville Missouri, where I went to university there was the Zodiac, which was not much more than a glorified warehouse with concrete floors and a raised concrete platform for dancing. The music was loud, and the crowd mixed, with a good few under-ager sneak-ins with fake IDs.

The Blue Moon, on the other side of the tracks, had pool tables, an abundance of ripped naugahide booths and the best hamburgers in town.

Ask any of the good Christian folks in Mooringsport, Louisiana, where my husband grew up, and they’ll tell you that the Highway 1 Bar is the brimstone belching den of Satan. When my husband was a child, his family drove by it several times a week on their way to and from church, looking upon it with disdain. After we were married, in an act of breath-taking rebellion, Raymond took me there for a drink. We weren’t taken to the back room and sacrificed to Satan, nor were we corrupted into a life of debauched drunkenness and godless filth. (though we might have already been a bit debauched) We were, however, served cold beer at a quiet table in the corner while country music whined on the jukebox.

As you can probably tell from my sordid and sleazy account … em … my experiences never quite lived up to the ones in my imagination. Maybe that’s why The Boiling Point appears larger than life in all three of Grace Marshall’s Executive
Decisions novels. The Exhibition is no exception. The Boiling Point is an amalgamation of the bars I’ve been in and the experiences I’ve fantasised in those bars. I reckon Harris Walker’s experiences of bars is rather similar to mine. They never quite live up to his expectations, and yet he wants them to.

After a less than satisfying experience in An Executive Decision, the first novel of the trilogy, the Boiling Point is not on Harris Walker’s list of favourite hang-outs. The Boiling Point is a squat cinderblock den of iniquity that has been through multiple incarnations since it was a speak-easy during prohibition. It’s the hang-out for all sorts – bikers, goths, red necks and even slumming banker boys. It has a reputation for watered down drinks, surly waitresses, loud music and being periodically raided – which is exactly what happens the night Stacie Emerson convinces Harris to meet her there in an effort to get him to exhibit his photography in her gallery.

As successful gallery owner, Stacie Emerson, finds herself in the clutches of a powerful enemy from her dark past, her growing feelings for her latest exhibitor, wildlife photographer, Harris Walker, could get them both killed. Sharing her secret could destroy their relationship, but keeping it could be fatal.

The fact that cops were pouring through the door only half registered in Harris’s Stacie-addled brain. Then some 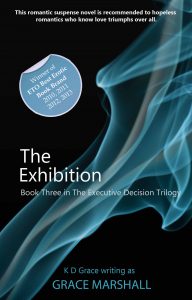 woman screamed raid, and people were running and shoving in all directions. Someone was shouting something in an authoritative voice into a blow horn. It all felt like a scene right out of a gangster movie.

Stacie grabbed him by the hand and dragged him back toward their table. She shoved her iPad in her bag, and shouted at Waters, who had rushed back to the booth with his dance partner hanging on for dear life and was now shooting pictures like crazy.

Every time the man had a camera in his hand, he looked like he was about to get well laid. Did his work really do that for him? The adrenaline rush that came from fear of losing life and limb was the best Harris ever managed.

‘You alright,’ Stacie yelled to Waters.

He nodded breathlessly and handed Stacie something that Harris couldn’t see. ‘Need you to do me a favour.’ His words were clipped, excited. ‘Can you take care of this for me?’ He nodded toward the ladies room.

‘Seriously? You brought that here?’ For a second, Harris thought Stacie was going to belt the man.

But Waters only shrugged, gave her a sheepish grin, and kept shooting. ‘I didn’t think.’

She said something that Harris couldn’t hear over the chaos, something he figured wasn’t very nice.

She grabbed Harris by the hand and headed toward the bathrooms, dragging him right on into the women’s room. ‘What the –’

She shoved her way into the first stall, dropped a tiny plastic bag with what looked like a couple of roll-your-owns into the commode and flushed with her booted foot.

‘Jesus! Are you kidding me?’ Harris felt the tension ratchet up a notch in his shoulders as she watched the swirl of water in the toilet to make sure her efforts were effective. ‘He brought pot here? Idiot.’

She placed a finger to her lips, then slammed the cubicle door shut once she was satisfied with the results. ‘I’m sure that’s not what they’re looking for, but it’s enough to land him at the police station.’

Before Harris knew what hit him, she pulled him into the cubicle at the other end of the row and locked the door behind him talking in a fast whisper. ‘Sorry about this. Not very professional, I know, but I promised to do my best to keep us out of jail, and I’m thinking groping in the ladies’ room’s not what this raid’s all about.’ The words were barely out of her mouth before she launched herself at him lips first. Damn it; he wanted to be mad at her. They were about to go to jail, for fuck sake! But instead of giving her a piece of his mind, he kissed her right back, hard, and felt her yield and open, and his tongue was in heaven sparing with hers, tasting, testing, thrusting. He found himself hoping that the inevitable arrest would wait until after he got his fill of Stacie Emerson, and that could take a while. She felt way better than she had even in his fantasies, and when his badly-behaving hands moved down to cup her magnificent bottom and pull her closer, she returned the favour and gave his ass a good grope. As though that gave him permission to explore, he slid anxious fingers inside her trousers wriggling down past a miniscule thong to cup an impossibly soft, impossibly firm buttock that gave a muscular clench in his hand, forcing her hips forward until she couldn’t possibly miss the press of his appreciative hard-on straining his jeans to get closer to her.