Sharazade Breaks the Language Barrier with A Skiff of Snow

I’m chuffed to bits to have my dear friend and fab writer, Sharazade on Hopeful Romantic today. I would love to offer her a proper British welcome, but since I’m not totally British and definitely not proper, I’ll just say what a pleasure it is to have her sharing the story behind her fun and sexy new story, A Skiff of Snow. A story that has a very special meaning to me. Take it away, Sharazade!

Quite some time ago I blogged about the importance of Facebook for writers as a place to make friends (post is here: http://sharazade.com/?cat=31). One of the erotica writer friends I made there was none other than KD Grace, whom I later had the pleasure of actually meeting at a writer’s conference. But even before that, we posted and chatted happily to each other on Facebook about this and that.

One day, she made a remark about expecting “a skiff of snow.” Now, to an American—or at least, to this American—a “skiff” is a sort of boat. I therefore expected that a “skiff of snow” would be a boatload of the white stuff. However, apparently to people living in the area of England that KD now calls home, a “skiff of snow” is a light dusting. So we talked about that, and then about other American/British terms that are different. KD also mentioned getting a delivery from her local milkman—a service that has all but died out in the US, as private dairies are forced out of business by regulations and rising costs. So that too fed into our discussion of cultural differences, and in a rash move, I said that if I were to write an erotica story about cultural differences, I’d put in a hot delivery man in it and call it A Skiff of Snow, and dedicate it to KD Grace.

Well. I think that was two years ago? Something like that. I am not the world’s fastest writer of fiction. But I really did write the story of the American girl Miranda, who travels to England, battles with vocabulary differences, and—of course—meets a hot delivery guy.

I find travel both intimidating and liberating. Even in a country that almost shares a common language with your own, it’s not that hard to make a fool of yourself. And yet, there’s a freedom in your relative anonymity too. No one knows you; you have no history. You’re freer to take chances. And so my Miranda, even while tripping over herself, has the guts to keep trying until she finally gets her man.

In this excerpt, from her attempt to buy a ticket at Waterloo station, you can tell she’s not quite there yet:

* * *
The line wasn’t long, actually, but it moved very slowly. People seemed to spend a long time at the window. Well, that would suit me just fine. If 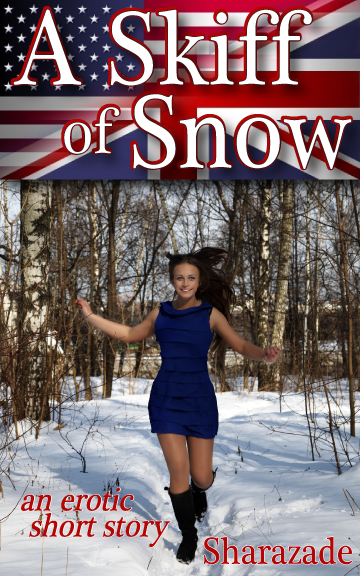 I got the right window. I looked around a bit at the other people in line. How unfair—there were attractive men all around me, actually. As there had been all over London. But how to meet one? I mean, how to really meet one? How did you start? I could strike up conversations about the weather or the time and ask directions, and I’d done all those things, but there never came a point when I could say, “Excuse me, but I’d like to have a fling.” I suppose I could have tried—but I wouldn’t want them to think I was that kind of girl. (Even if I kind of was.)

I turned a corner in the queue-line and could see the male agent again. Maybe about 30 or 35, brown mussed hair, and blue eyes. And … a blue uniform. What is it about men in uniforms? OK, I know selling train tickets isn’t quite the same as being in the RAF, but … it still looked hot. Trust me. I imagined his arms around me as I played with his gold buttons, teasing him a little.

Back up. I’d have to get there first. But at least here I’d have an excuse to make some conversation. I’d ask for my ticket, see, and he’d note the destination, and mention that he was going there anyway, to … to stay with his aunt, or something … and … he’d sort of hint around to make sure I was single, and then we’d arrange to meet up, and …

Another male agent walked behind him. Yes! Two agents! Both of whom had the night off! And would want to show an American around. And we’d wind up back at their apartment – I mean their flat – and one would stand behind me, holding my arms at my side, kissing my neck at just that spot. Then the other one would step up to me, and say

I was probably more flustered now by the station agent than I would have been by the damn ticket machine. OK, Randie, calm down. You can do this. Talk to the nice man without drooling.

I sort of gawped at him. I couldn’t remember what to ask for. “Um, I need a ticket…”

What the hell? That was pretty forward! I blushed. He’d skipped about six steps of my planned dialogue, but … I could roll with it.
“Yes, I am. Just out of a relationship, actually … ” (Well, so he wouldn’t think I was some sort of loser nobody wanted to date.)

“I mean for the ticket. A single or a return?”

Oh god. Right. The ticket. I didn’t know how to answer the question, though. I had to settle for staring blankly. Return? Did that mean refundable?

Right – duh. I should have been able to figure that one out, but I’d been too distracted by his uniform. Good thing he also spoke American. But now I was not only not getting a date – probably – I was totally embarrassed.

What? Oh … was he hoping to meet me after all? “Well … to here, of course.” I sort of half-winked at him and gave him my most enticing smile.
“Yes, but … ” Was that a small sigh? “But what city did you want to go to, so that you could come back here from it?”
Oh god. Oh god. I’m such a dope. I will never, ever buy a ticket from a man in a uniform again.

A definite sigh this time. “Not walking, love. Where do you want to ride to, on the train?” Like he was talking to a three-year-old.
Oh god oh god oh god. Even the “love” didn’t help. How the hell did you pronounce that name? I tried again.
“Woaking? Wooking?” Why wouldn’t it be wok, like the Chinese dish?

I showed it to him on my little map.

“Oh… Woking,” he said – exactly the same way I’d said it. At least I think. My face was flame red. I considered changing my ticket to a one-way – dammit, a single – so I would never have to face him again, broad-shoulders-in-a-uniform or not. Thank goodness I didn’t have to give him my name in order to get the ticket. (And he didn’t say anything about going there himself, or having the night off. He probably didn’t even have an aunt.)

When Miranda meets the right man in the right way, though, they find that they share a common language after all. This one’s for you, KD!

Thank you for this, Sharazade! It’s the first time I’ve ever had a story written for me! It’s a fab tale, and what fun it was being a part of the discussion leading to it! KDx

A Skiff of Snow is available at Amazon, Smashwords, and other fine purveyors of cross-culturally informed erotica. 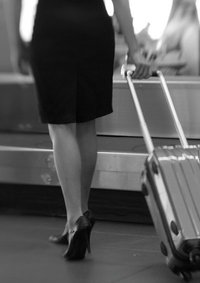 Sharazade is professional writer, editor, and consultant, with more than 20 books published under another name. She divides her time among Asia, Africa, the Middle East, and the U.S. Not surprisingly, her stories tend to feature some aspect of travel–modes of transportation or exotic locales. She enjoys stories that are realistic enough that they might have happened and fanciful enough that they might not have. She values communication, adventure, exploration, passion, and love. Find her on her blog at http://sharazade.com.