Predictions from a Muddy Walk 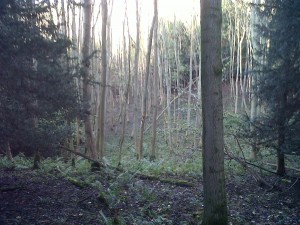 “Lets take the route through the woods,” I said. “It’ll be safer, less muddy,” I said. Gawd, am I glad I’m married to a man who isn’t into ‘I told you so,’ cuz Wow! I think I actually came home with mud in my ears yesterday after our annual New Years Day walk. Although having said that, the downpour that we walked in the last third of the walk might have washed the mud out of my ears as while. It did wash most of the ten pounds of extra weight off my boots en route. Nice, easy cleanup that way.

Prediction One: Sometimes things won’t go according to plan

We approached the walk with enthusiasm, chatting about which route to take, because living in Surrey, as we do, we’re spoiled for choice. However England in the winter means LOTS OF RAIN and many of the paths turn into mud baths from December through to April. Prediction: Like every new year, like every new beginning, we approach with enthusiasm, we plan and scheme and take into account as many variables as possible, but there will be times in 2016, things just aren’t going to go according to plan. My logic for the choice of paths we took was sound. It made perfect sense to both of us to take a flatter path rather than a steeper, more treacherous one. We might have been safer, but we worked four times as hard just to stay on our feet. Never mind! We managed with lots of laughing and joking and a minimal amount of blue language from yours truly. 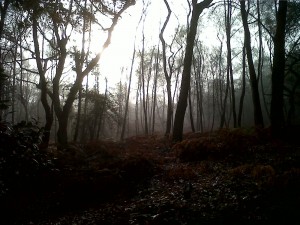 Prediction Two is very closely tied to prediction number one. Things will get messy. It’s a given. Might as well get used to it now and not let it get under my skin. I always let it get under my skin. I like things to go according to plan. I like to keep the mud off my boots, so to speak. So here is the warning sigh for the muddy bits. Be prepared K D! Take a couple of deep breaths, think peaceful thoughts because you know, as sure as you’re sitting here pounding out a blog post, that things will get messy.

Prediction Three: This too shall pass

Eventually, we came out of the woods onto solid ground – a paved road, actually, a part of a route we’d not walked in a while. We abandoned our original plan in favour of just getting out of the mud and then we remembered why we had enjoyed this particular forgotten route so much. There were great views of the Downs and solid footing – even a bit of cover by the trees when the rain properly set in. Our ordeal in the mud had put us in a reminiscing sort of mood, remembering all the walks that we’d had in which the weather or the circumstances were less than ideal and yet, when we ended up at the pub at the end of the day celebrating over a pint, some of those walks were the best ever. We decided we could write a book about those walks that went wrong and then turned glorious. Which leads me to prediction four for
2016. 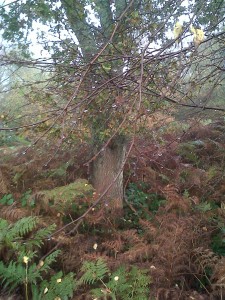 The best walking war stories we have are the ones from the most difficult walks. We never get tired of talking about them, and we always laugh and smile when we do. The best walking stories come from the most difficult walks because the most difficult walks challenge us and test us; some have made us really dig deep to see what we’re made of. Those are the ones that make us earn our pint. That goes with most of the challenges we face every year, and this year will be no exception. I have war stories from 2015; I’ll have them for 2016 as well. In fact, the very first one is a walking in the mud story from January 1st! Nietzsche might have said ‘what doesn’t kill us makes us stronger,” but I say what doesn’t kill us will be worth a good laugh about over a pint when we get through it.

Prediction Five: Even if it gets messy, it’s gonna be good!

I’m basing that little prediction on the track record of the past … well … whole bunch of years of my life. I have to admit, I can be a bit of a ‘glass half empty’ sort of a girl from time to time. Fortunately I’m married to a ‘glass half full’ sort of guy so we balance each other out, and it’s good! Even at times when I’m up to me ears in the mud and the rain, it’s all good. That’s more than just taking into account that this too shall pass and that there’ll be beer or coffee or both waiting at the end of the tunnel. That’s the fact that all things being equal, I expect lessons along the way, and I also expect that some of them I’m not going to like very much. Usually those are the ones that I learn the most from. I don’t come out unscathed. I always come out with a few new battle scars and war stories, and I always find myself, at the end of the year, astounded that I made it through at all! What are the chances? I mean really? What are the chances of any of us really being here, and yet we are, and we laugh and we cry and we love and we fight and we squirm and we angst and we struggle through the mud, and we get there and we shine, at least a little, and that’s what we remember. That’s what matters. I have to say, I’m with Edna on this one! 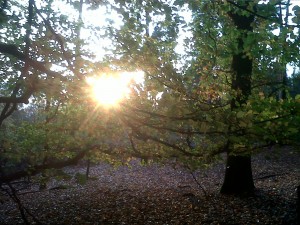 My candle burns at both ends;

It will not last the night,

It gives a lovely light!

May there always be a nice pub and a pint at the end of your muddy walks in 2016.