Our Own Private Identity Crises

Some of you may recall that while I was on holiday in the States this summer, I ran a series of posts called, “first in series.” They were little posts about the first books in each of the series I’d written as well as a spicy excerpt. Well, I’m over first books now. Time to move on to second. This little post and excerpt is from Identity Crisis, the second book in the Executive Decisions series. 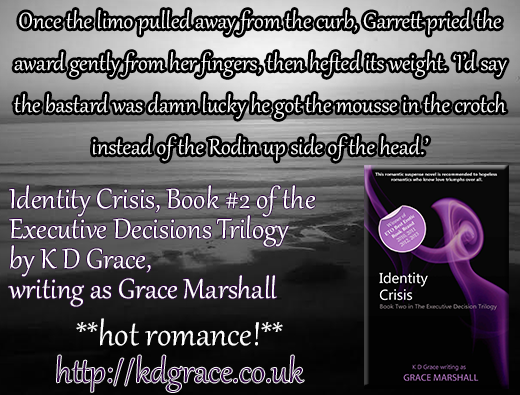 I’m sure we’ve all undergone some sort of identity crisis at some point in our lives, and let’s face it, in the world in which we live, we’re always juggling roles. We all wear lots of hats, and some of those hats are drastically different. For those of us who are writers, we can add to that identity crisis the identities of all of our characters, with whom we live twenty-four seven when we’re writing. For us, it sometimes gets a bit confusing as to who’s real and who isn’t. I doubt if I’m the first writer to fall in love with one of her characters. For those of us who are avid readers, who doesn’t want to crawl inside their favourite characters and embrace them and embody them and live out their adventure – especially when there’s hot romance involved and the hero is larger than life, sexy, flawed and in need of a heroine to make it all better?

Isn’t that a big part of what makes reading so wonderful?

Since writers are also readers, that means we’ve got LOTS of possibilities. Our imaginations allow us to be so many different people in so many different situations. With Identity Crisis, which is book two of the Executive Decisions trilogy, I wanted to play around with the idea of all the people who live inside each of us, and I wanted to seriously up the ante.

Garrett Thorne has a unique identity crisis. Garrett writes very popular romance novels, but he doesn’t write them under his own name. He writes them as Tess Delaney and, because Garrett is very good at keeping his secret life secret, every reader of romance is speculating wildly about the mysterious, reclusive Tess Delaney, who no one has ever seen. Everyone, however, has seen business tycoon, Ellison Thorne’s, bad-boy younger brother, Garrett, and everyone is convinced of what a ne’er do-well he is.

Garrett okay with that. It covers his romance-writing tracks nicely, and he manages to juggle living as two people very well until Tess Delaney is nominated for the coveted Golden Kiss Award for romance writing, and suddenly there’s a real threat that Tess’s true identity will be discovered. That kind of exposure, Garrett doesn’t want, so against his better judgement, and because he has little choice, he hires PR person extraordinaire, Kendra Davis to play the role of Tess Delaney for the ceremony. But Kendra’s identity crisis is even bigger than Garrett’s. Throw in a stalker and a love-hate relationship sizzling enough to set the whole Northwest Coast on fire, and let the adventure begin!

Identity Crisis Blurb:
PR rep extraordinaire, Kendra Davis, is elated when she gets the chance to work for her hero, reclusive, romance novelist, Tess Delaney. Her elation is short-lived when she discovers that Tess is none other than Garrett Thorne, the bad-boy brother of business tycoon and eco-warrior, Ellison Thorne, who is engaged to her best friend, Dee Henning. Kendra blames Garrett for the comedy of errors that nearly destroyed their relationship. Garrett doesn’t like Kendra either, but he’s desperate. His alter-ego, Tess has been nominated for the prestigious Golden Kiss Award. No one knows who Tess really is, and he needs Kendra to play Tess for the awards. 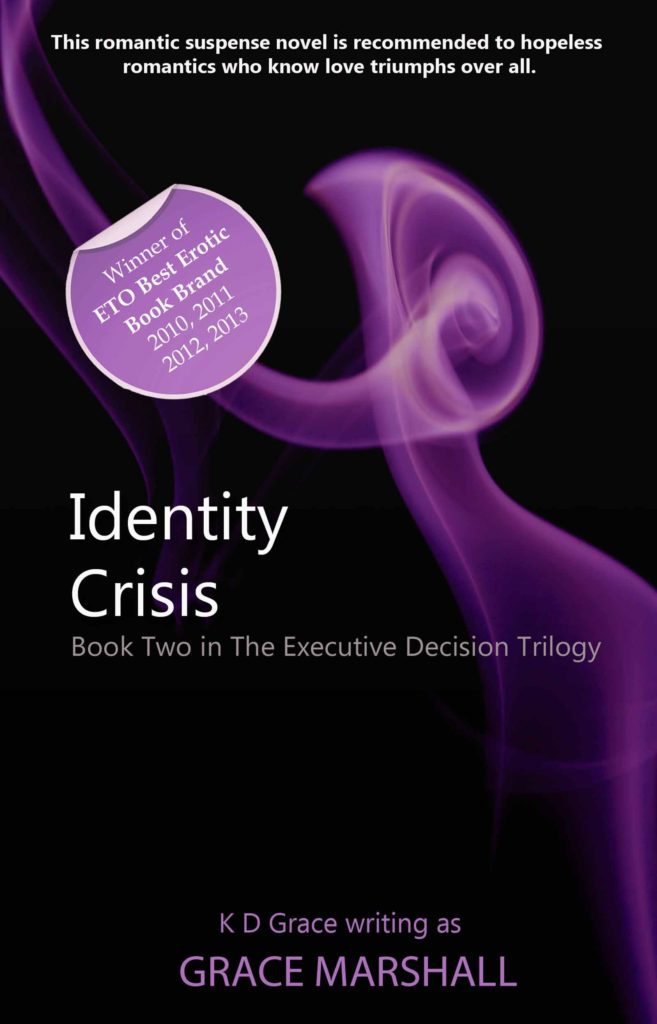 Identity Crisis Excerpt:
She cocked her head and looked at him in a way that made him think she was expecting to find something, something he was hiding. But just when he was beginning to feel defensive, she shoved her iPad back into her bag and stood. ‘Alright then. That’s all I need today.’

‘Wait a minute.’ He said following her to the door. ‘Don’t we need to … I don’t know … Practice? I mean I barely know you and you said we need to be comfortable with each other.’

She turned so quickly he nearly ran into her. ‘You don’t have to be comfortable with Kendra Davis, Garret. You have to be comfortable with Tess Delaney, and I promise you will be.’ She looked up at him with a smile that might have been teasing, might have been a smirk. Whichever it was, the small alcove where they now stood suddenly seemed even tighter fitting than it actually was. ‘If it’ll help,’ she said, ‘you can kiss me good-bye.’

‘That’s not very professional,’ he managed, feeling like the breath had been squeezed out of him as he fumbled to help her into her jacket.

Her smile was warm, reassuring. ‘Actually, in our case it’s very professional.’ She rose on her toes and brushed a kiss across his lips. ‘Very professional, indeed.’
And before she could pull away he scooped her into his arms, feeling her little gasp of surprise as he took her mouth. What had only been intended to show her he was up for it, very quickly changed to something else, and suddenly they were clawing at each other, hands grabbing collars and hair and anything else to get closer to each other. Clothing brushed against clothing until friction mounted and body heat radiated through. And God, her mouth was sweeter than anything, full lips so soft one second and so hard and demanding the next, parted to allow him access to her tongue and her hard pallet, to her warm humid breath coming faster and faster as her fist clenched in his hair and her own tongue battled for supremacy. And her body, Jesus, her body was hard pressed and tight and mounded and undulating and he’d never felt so much fire just beneath the surface.

But she was Kendra Davis. And just when he was ready to scoop her up and carry her off to his bedroom. Just when he was ready to hold her captive there for the next three of four or more hours, she stepped back with a little sigh and caught her breath. She raised a hand to her lips, almost but not quite covering her teasing smile and said. ‘You get an A Plus for practice, Garrett Thorne. You just convinced the hell out of me.’ Still breathing hard, she ran a hand through his hair, brushed a quick kiss across his lips and let herself out, leaving him leaning against the wall barely able to stand. For the very first time, he allowed himself to think that not only might they be able to pull this whole charade off, but he might actually enjoy it.