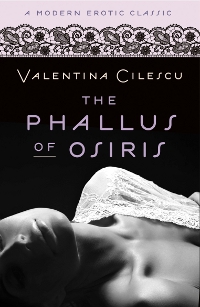 Death and Lust and Vampires!

The Master is a sex vampire. His aim: to dominate through the glories of the flesh. His minions are beautiful and lascivious and their eager bodies and warped minds are bent to his evil purpose. The lost Phallus of Osiris is the greatest erotic talisman known to man and the Master will not rest until he has it in his possession. Just one woman can help him fulfil his dark ambitions – the one person who still resists him. Mara, the white witch. Great though the Master’s power is – in Mara, and The Phallus of Osiris, he may have met his match.

It was dark in the room. Dark and strangely airless. But Mara felt no fear. She stretched out her hand and touched her unseen lover’s hand. Although she could not see him, she knew he was standing by the side of the bed; that he was naked, and ready for her . . .

‘Come to me . . .’ breathed Mara. And her fingers moved from her lover’s hand to explore his body – running down his flank, his thigh; searching eagerly for the warm weight of his testicles; seeking out his most sensitive and intimate places to tease and excite his flesh; and bring him to her.

She heard his breathing: hoarse and quickening now. And seconds later, she felt him sit down on the bed beside her, felt the soft coverings yield to his weight as he lay down by her side and pressed his hot nakedness up against her willing flesh.

He was by her side now, stroking her with knowing fingers that seemed to read her mind, divine her every dream and wish. His fingers slid down her body, as though taking the measure of her, mapping out the fullest extent of the bounty offered to them. They fluttered like butterfly wings, up from the firm roundness of her hips to the taut flesh of her tiny waist, and then up still further; until at last they found the swelling amplitude of her magnificent breasts, caressing their firmness appreciatively.

He was kneeling beside her: leaning over her, the better to toy with her. Mara gasped with pleasure as invisible hands cupped her breasts and kneaded their warm and yielding flesh. Skilled fingers searched out the budding hardness of her nipples and pinched them between finger and thumb, just hard enough to provoke an irresistible blend of pain and pleasure.

‘Take me!’ gasped Mara, reaching up and touching the hands which were so knowingly exploring her body. They were strong hands, hands she felt she knew well; hands that were strong and sinewy and capable of great violence – and yet gentle enough to tease, torment, arouse.

Strong, sinewy wrists and forearms . . . She could reach no further; so she stretched out her hand to the side, and felt for the body of her unseen lover. Her hand made contact with his thigh, muscular and covered with thick, coarse hair. She slid her hand upwards, upwards, letting her fingers glide softly over the hairs; and she felt her lover tremble at the exquisite torment of her touch. Bolder now, she let her hand move higher still, and shivered with delight as her fingers brushed against her lover’s testicles.

They were heavy, vital, pulsating with a raw energy that communicated itself to her as she stroked their velvety pouch, weighing them in her palm. Then she let her fingers stray still further, and felt them slide deliriously along the smooth length of a hard and throbbing shaft that she knew yearned to bury itself in her.

And as she stroked it, she felt herself grow hotter and wetter, her juices welling up as though from some secret spring deep within her. It was as though she was melting from the inside outwards, as butter might melt in anticipation of the hot knife that would soon plough into its

The room was filled now with the fragrance of sex; the sweet, heady aroma of a cunt well greased, of a prick whose tip glistens with the first drops of semen, the first promise of the torrents to come. Mara slid her hand along her lover’s shaft and ran her fingertips gently over its tip: it was already slippery with love-juice and she shivered again with the delicious anticipation of its entry into her most intimate places.