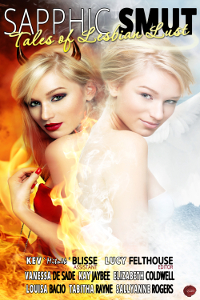 From coffee shops to exotic Indian adventures to cosy cabins in France, Sapphic Smut has it all. Fun with sugar, naughty spankings, seductions by strangers, seductions by friends, cougars and even a twist on a fairy tale abound in this exciting collection of lesbian stories from erotica’s finest authors.

Alana really couldn’t believe how flat Holland was. She’d been told by many people, but somehow, she still wasn’t expecting a place that made Cambridgeshire look like the Peak District. Her view from the train as she travelled from Schiphol airport to Amsterdam’s Centraal Station was unimpeded. Not so much as a hillock was visible.

And now, here she was, standing outside the station with crowds milling around her. A mixture of tourists, businesspeople and natives. She herself was a combination of two of those groups—she was here on business, but she’d deliberately extended her trip so she could spend a couple of days exploring the city. She had a day either side of her meeting, the boring part a filling to a sightseeing sandwich. Though, despite the boring tag, the meeting definitely wasn’t a bad thing, it was an appointment to cross the ts and dot the is on a very lucrative deal—certainly the trip was worthwhile.

After watching the insanity for another minute or so, she began to head away from the station, wheeling her small case along with her. Already armed with a guidebook and a decent map, she knew where she was going. Her map-reading skills were excellent, and she made the short walk to her hotel in less than twenty minutes. Anywhere else, she’d have gotten a cab, but it appeared they were a rare commodity in this city.

She’d checked in, dumped her bags and freshened up within another ten minutes, and was back on the street.

An online acquaintance had sent her a bunch of information for her trip—about the best museums, interesting things to see that might not be in guidebooks, and details on transport. It appeared that Amsterdam was unlike London, Paris and Rome, in as much as it had trams as its preferred mode of transport, rather than underground trains. Only one Metro line ran through the city, north-to-south. Everywhere else was utterly dependent on trams, bikes and being on foot.

And fuck, there were a lot of bikes. They zipped here, there and everywhere, not always staying where they were supposed to be, it seemed. The slim Dutch people atop the bikes were oblivious, just concentrating on getting where they were going.

Alana searched for the nearest tram stop, and quickly discovered she needed to be on the other side of the road to head in the right direction.

Crossing the road was a chore in itself. A dice with death. She’d thought Rome’s motorists were insane, but at least they were fairly predictable. Here, she was faced with crossing a road that held a cycle path, a tram line and a lane for cars. Shifting down the pavement, she stood at the conveniently placed crossing. It still didn’t make things much easier, but at least she could mingle in with the crowd. Traffic was much more likely to stop if it was going to hit a crowd of people than a single pedestrian. Right?

By some miracle, she reached the opposite pavement unscathed—except for her nerves, which were shot—and approached the tram stop. As if by magic, a tram arrived, and it was the correct number. Things were looking up.

After a few minutes, she realised that public transport in Amsterdam was nowhere near as easy to navigate as in the other major cities she was familiar with. There, their Tube or Metro stations always had plenty of large, unmissable signs telling you where you were. Piccadilly Circus, Anvers, Piramide. Here, it seemed you were left to your own devices. There were announcements on board the tram, but they were in Dutch—a language which she knew very little of—incredibly muffled, and pretty much drowned out by the sound of the tram’s motion and its passengers.