Zachary has a dilemma. His girlfriend, Reese, has a special birthday coming up soon and he has absolutely no clue what to get for her. It doesn’t help that Zach does not share or really understand Reese’s biggest hobby—comic books, superheroes and everything that goes with them. Zach raids Reese’s DVD collection for inspiration, and what he finds there gives him an idea…possibly the best one he’s ever had.

Sure, Reese has fantasized about her favorite superheroes. All those muscles and rakish smiles are to die for. She didn’t think Zach would ever really understand, though. But he proves her wrong in the best way possible. 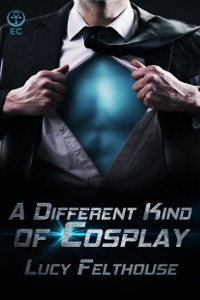 Zachary sighed at the calendar entry in his phone, which was reminding him for the third time about Reese’s upcoming birthday. And it wasn’t just any birthday—she was going to be thirty.

There were perks to dating a doctor—the uniform was pretty hot, for example—but when that doctor had no particular fondness for jewelry, flowers or chocolates, buying her presents was nigh-on impossible. And because of her work schedule, a surprise weekend away was out of the question. He’d long since learned to always keep the receipts.

Most people get their partners something to do with their hobbies or interests. However, Reese was even awkward in that regard. Her main hobby was so complex that Zach didn’t have the first idea what to get her to do with it—Reese was an uber-geek. Films, graphic novels, collectibles, all that jazz.

Obviously he could just ask what she wanted, then go out and get it, but then it wouldn’t be a surprise. And it was too easy—he wanted her to know he’d really made the effort.

Snoozing the calendar reminder once more, Zach threw the phone onto the sofa, then walked over and started rooting through their combined film collection for something to watch after dinner, which was almost ready. Reese was on-shift at the hospital until silly o’clock, so he had the house to himself and could watch whatever he liked. An action movie it was, then.

Running his fingers along the spines of the DVDs and Blu-rays, he suddenly paused. The Avengers leaped out at him, for some reason. He’d seen snippets of it before, as Reese watched it pretty frequently. The parts he’d seen hadn’t looked too bad, actually. It was essentially an action film, he decided, but with superheroes in it.

He pulled the case off the shelf, an idea beginning to form. Maybe if he watched it beginning to end, he’d seen what drew Reese into that world so much, why she was so fascinated by the films, the graphic novels and so on. Even if he didn’t get it, though, maybe it would still give him some inspiration for a gift. He had nothing better to do that evening, in any case, so it was certainly worth a try.

After putting the disc in the player, he headed into the kitchen to see how his dinner was coming along. A meal in front of the television was the order of the day, it seemed.

A few minutes later, he settled onto the sofa with his lasagna and garlic bread, a bottle of beer on the table next to him. Time for some Avengers action.

Within half an hour, he’d ascertained that the film wasn’t just for geeks. In fact it was easy to see why it had such a wide appeal—the cast was supremely attractive, whatever gender you were into, the plot was interesting and the dialogue seriously witty. He’d already developed quite the crush on the Black Widow, and Nick Fury’s right-hand woman had a lovely pert backside.

Trying to put himself in Reese’s shoes, Zach looked at the male characters. Okay, when it came to this film, straight women clearly had more eye-candy than they knew what to do with. He vaguely remembered a bunch of crazy stuff going around on the Internet about Loki—even the villain of the piece had sex appeal, for heaven’s sake! So much so that it had spilled over into even Zach’s limited social media presence. He barely used Facebook, and he’d never gotten the hang of Twitter. And yet he knew about the rabid fangirls. That was another score for The Avengers, then—truly mass-market appeal. If only there were mass-market gift-buying options.

Sighing, he tried to empty his mind and concentrate on the film. The more he tried to force an idea to present itself, the less likely it would be to happen. He’d just enjoy the entertainment and keep his fingers crossed that his subconscious provided something useful.

Once he’d made the decision, it wasn’t difficult to get sucked back into the narrative. It was engaging, easy-going and fun. Zach surprised himself by thoroughly enjoying the entire thing. Reese would be pleased when the next film came out at the cinema and he offered to go along with her.

He’d keep his new found admiration quiet for now, though. He didn’t want to arouse her suspicions, although she was bound to know he was planning something for her milestone birthday.

The question remained—what the hell could he do or buy to blow her away?