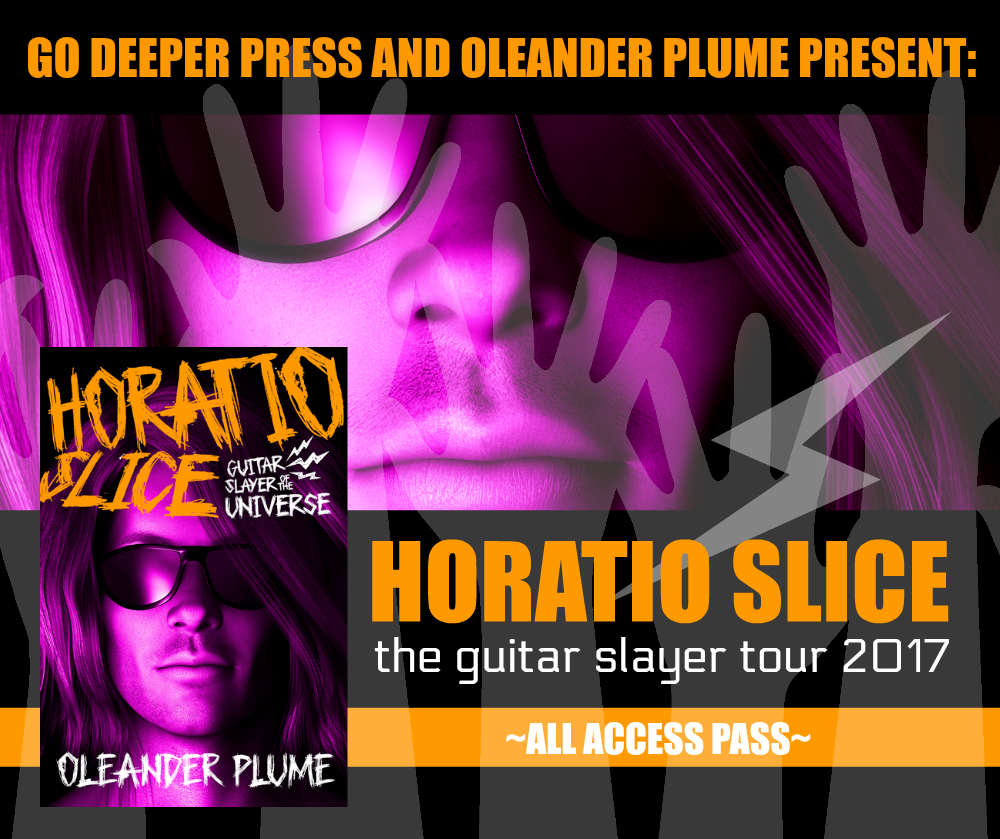 It’s my pleasure to welcome a writer who has never guested on A Hopeful Romantic before. I’m very pleased to  host Oleander Plume on her blog tour for her new novel, Horatio Slice: Guitar Slayer of the Universe. And best of all, an exclusive excerpt to whet your appetite.

One of the best parts about putting this book together (Besides the sex!) was getting a chance to work with Jacob Louder. In case you don’t know Jake, he’s a writer, editor, graphic designer, and one half of the amazing indie publishing house, Go Deeper Press (the other half being his lovely wife, Lana Fox).

After reading the first draft of Horatio, Jake pointed out something that I hadn’t noticed on my own: I head-hopped between characters, sometimes every other sentence. A bad habit, for sure.

Jake suggested that I concentrate on one character’s point of view at a time, a task that sounded easy on paper, but proved difficult during the writing process. I had so much story to tell, switching between characters seemed to work for me, but I agreed with my editor that head-hopping was jarring and confusing to the reader.

In the end, we compromised. Since there are four main characters, I took turns telling the story through their unique perspective. Chapters one through three are written in Gunner’s voice. Chapter four is from Horatio’s point of view, and so on. This turned out to be, for me, a very enjoyable and unique writing experience.

I tend to write by feel, and while some chapters felt like they needed to be told by a specific character, others weren’t so clear. Some were written 2 or 3 times, until I found the right voice. I suppose this is one of the reasons why this book took two years to finish!

Horatio Slice: Guitar Slayer of the Universe is available now. Would you like to give it a read? Here’s the official blurb, written by Jacob Louder:

Horatio Slice is NOT dead.

Gunner Wilkes knows a secret. Heartthrob rock star Horatio Slice is not dead. Sure, Gunner may turn heads with his
big brain, good looks, and gym-built body, but his mind is on one thing only: returning his all-time favorite rocker and secret fanboy crush to Earth.

Yes, there are VAMPIRE PIRATES

Fame and stardom were starting to wear thin for Horatio Slice, but when he was sucked through a magical portal while on stage at Madison Square Garden into a jail cell in a strange dimension called Merona, his confusion quickly cleared upon meeting his sexy, dark-haired cellmate, a vampire pirate named Snake Vinter, who filled Horatio in about life in the universe, jumping from dimension to dimension, and craftily avoiding the wrath of gnarly-mask-wearing leather queen King Meridian—a guy nobody wants to cross.

The metal ship is named Frances.

And on Snake’s metal ship live eight identical blond Humerians, who proudly display their cocks and assholes in carefully crafted trousers, as well as a wild assortment of untamable, cock-hungry travelers and stowaways. But someone has hacked into Frances’ mainframe, demanding that Snake and crew deliver Horatio Slice to King Meridian, or feel his wrath.

Sugar sighed with boredom. His favorite gay bar, Vibrations, was packed to the rafters, and he’d already run out of virile specimens to flirt with.

Since Denny kept Sugar’s glass full, he was the only one allowed to call him “Sugs.” All others would be throat-punched forthwith. He replied, “I’m fan-fucking-tastic.”

“Which is exactly how you look tonight,” Denny said. “If your sweet ass needs a mustache ride, just give me a holler.”

Sugar hated Denny’s vintage porn-star style, but the man had a talented tongue. He contemplated whether a ride on Denny’s face was in order when an unfamiliar voice sounded from behind.

“Hello, beautiful. Where have you been all my life?”

Without turning around, Sugar said, “Hiding from you.”

“A wise decision,” the stranger said, taking the seat next to Sugar.

After such an anemic pickup line, Sugar expected to be underwhelmed, but the man draped over the adjacent barstool made him swoon, and Sugar swooned for no one. Long and lean, his knee-length hair was a mass of raven tangles. A sparse goatee covered his upper lip and chin, framing a sexy mouth, but his eyes sealed the deal—polished steel, deep and sparkling with danger. One gloved finger ran over Sugar’s jawline while the silver eyes traveled to his jugular, a hint of fangs behind the pout.

“What do you want, vampire?” Sugar said.

“Just a taste. Then … more.” The creature took Sugar’s hand and brushed a kiss across his knuckles.

Sugar scowled, hoping to disguise the lustful shiver those lips caused. “I’m meeting someone. Fuck off.”

“Who are you meeting?”

“My boyfriend.” Sugar set his jaw. He knew this guy’s type backward and forward.

“Then why is your heart beating so fast?”

“It is. I can hear your blood rushing through your veins. I’ll bet it’s sweeter than candy.”

“Didn’t I tell you to fuck off?” Sugar took a sip of his wine and glared at the seductive stranger. But he didn’t really want him to leave. Not yet, anyway.

Oleander Plume lives in Chicago, Illinois, with her husband, two daughters and a pair of obnoxious cats. While she writes in many genres, her favorite is m/m. Or m/m/m. Or m/m/m/m, or … who’s counting, anyway?

For more information, please visit her at poisonpendirtymind.com

3 Responses to “Oleander Plume Head-Hops with Horatio Slice: Guitar Slayer of the Universe”