New Release: The Attack of the Woodwose by Selena Cooper 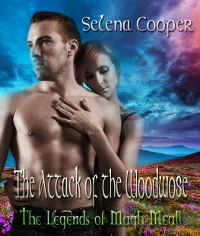 THE ATTACK OF THE WOODWOSE: LEGENDS OF MAGH MEALL, Book One

Two enemies must stand together to face a common foe!

Upon returning home with his human fiancé Berta, Reghan the Leprechaun learns that his brother is hiding the sister of Sloan, the Clurichaun who, along with his men, recently attacked Reghan. Reghan goes to tell Sloan that his sister is safe before the Clurichauns determine she’s been kidnapped.

At Sloan’s manor, the men are informed of an impending attack against both the Clurichauns and the Leprechauns by a vicious tribe known as the Woodwose. The only way they can win a battle against the woodwose is to stand together. Now they must convince their clans of that!

Berta was nervous. She stood on the porch and stared out at the pitch dark night. Living in the farmhouse in the middle of nowhere with her Leprechaun lover had been pure bliss for the past three months.

The Clurichauns, who’d beaten Reghan and had abandoned their pursuit only when Berta’s dog and a team of coyotes had driven them away, had left Berta and Reghan in peace once their leader had realized Berta was carrying Reghan’s child. Every day the couple had grown more in love, and every day she’d learned something new and wonderful about her lover. But now Reghan’s father had sent word that a delegation was on its way to get them and bring them home.

The screen door creaked and then clicked shut as Reghan stepped onto the porch behind Berta. He slid his strong arms around her slightly bulging middle. He brushed aside her long blonde hair and kissed her neck. “My parents aren’t ogres, you know.” His voice was a low rumble vibrating against her skin.

“Are there such things as ogres?” “There are…but there aren’t many in these parts…not anymore,” he said.

“But there were?” Berta still couldn’t quite make herself believe that Reghan’s being a Leprechaun wasn’t just some elaborate hoax. When he spoke of other “mythical” beings so offhandedly, she didn’t know what to think.

Reghan didn’t look like she’d have imagined a Leprechaun to look. He wasn’t a tiny little man with a green top hat, buckles on his shoes, and a pot of gold in his hand. In fact, he was a rather large man with dark red hair, bright blue eyes, and a neatly-trimmed beard. His handsome face and chiseled body might’ve made some women think he was a demi-god, but Berta doubted anyone’s—at least, any human woman’s—first thought upon seeing Reghan would be, “Hey, look! A Leprechaun!”

“Don’t try to change the subject,” Reghan murmured against her neck. “You have nothing to fear from my parents.”

“What if they don’t like me?” she asked, for what had to be the hundredth time.

“They’ll love you.” He turned her to face him. “Now come back to bed and make love to me again before the delegation arrives.”

“A delegation,” Berta said. “The very fact that they’re sending a delegation to get us terrifies me.”

Reghan tilted her chin up. “You worry too much.”

Selena Cooper lives in the Southern United States. She’d love to hear from you! Send her an email at selena@selenacooper.com and/or follow her tweets and posts on Facebook. She’d love for you to consider becoming a part of her street team, Les Chats Noire. To learn more about it, visit her website!