New Release: A Matter of Lust by Lisa Fox 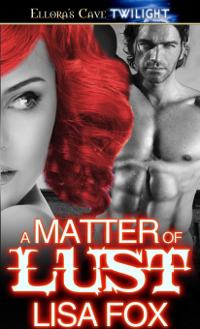 Trask is a lust demon on the hunt for a playmate, a human exceptional enough to sate some of his ravenous hunger. When he finds Rena, he knows that she is the one he must have. He makes it his business to seduce her.

Rena is immediately drawn to Trask. She could easily fall for the dangerously sexy bad boy who makes her scream every time he makes her come, but the problem with bad boys is that they’re actually bad. They break girls’ hearts and hers has been broken too many times already. One more crack might shatter it forever.

Trask claims Rena for his own, but she needs more than just sizzling sex. She wants to trust him, but can they ever share anything more than lust?

An Excerpt From: A MATTER OF LUST

The deep, melodic trance music vibrated through Trask’s body as he prowled the crowded dance floor. He was hungry, so very, very hungry, and the time had come for him to find a willing partner for the night. Any one of the mortals undulating around him would have sufficed, but so far none of them appealed to him. The need gnawed at his insides, but he waited, searching for the one. Over his long years among the humans, he’d learned that it always paid to be a little bit discriminating. It made the feast so much more gratifying.

He cruised the dance floor, reveling in the exquisite thrill of his hunt. Human lust was such a decadent treat, so very different from the desperate lust of the damned in hell, and it filled this ordinarily dull world with brilliant light and added depth to the darkest shadows. He could feel it oozing from the dancers, the men and the women, sweating and panting, touching and grinding, their bodies writhing in time with the music. Tension built in his groin and he welcomed the pure, straining delight.

He stopped suddenly, the prickling at the base of his spine alerting him to the presence of another demon nearby. Not a lust demon like himself, but something similar. Pride maybe, or perhaps wrath? He couldn’t quite get a fix on it. He waited, wondering if it was going to make contact. Often other demons haunting and hunting the human realm wanted to meet, to plot and plan and scheme, to “raise some hell” or whatever, but he got the impression that it was occupied with something else entirely. Which was just fine with him. He’d never been the social sort.

The music changed and a thumping bass beat poured out of the speakers. Trask shook off the psychic residue of the other and worked his way toward the bar. He ordered a bourbon on the rocks and leaned back, happily absorbing the intoxicating atmosphere while scanning the crowd for his potential playmate.

His gaze fell upon a woman on the edge of the dance floor in a short, black dress that hugged every curve of her luscious body. Her violently dyed red hair was piled high on her head and sexy tendrils escaped to frame her heart-shaped face. There was a hint of rosy flush on her smooth, round cheeks and the way her hips swayed to the music made his cock stir.

Trask placed his drink aside and unconsciously ran his tongue over his teeth as he glided toward her. She was tall, probably close to six feet in her heels, but he still had to lean down to whisper close to her ear. “Hello,” he purred, breathing in her clean scent of shampoo and roses and woman.

She turned slowly toward him, her gaze roaming over his face, his body, and he got the distinct impression that she was mentally undressing him. He certainly hoped she was. She obviously liked what she saw because a smile blossomed on her glossy, pink lips. “Hi.”

The instant, piercing sexual tension between them made his blood surge. He reached out with a fine strand of psychic energy and lightly dipped into her primal core. Trask hissed as desire coiled in his groin. She was sweet ambrosia, a succulent feast just waiting to happen and his cock ached to sink inside her, to make her come again and again while he fed on all that glorious lust. “You are very beautiful,” he said, savoring the tiny taste of her fire.

“Uh-huh,” she said, mischief and humor making her eyes sparkle. “Tell me something I don’t know.”

Trask laughed. He liked this woman. “I think I might be in love with you,” he said, beginning the game. It was a line that had worked many times before—the humans always seemed enchanted and amused by the concept, but it was a hollow sentiment, something meant to elicit a grin and nothing more. But as the words left his mouth, they felt different this time, almost as if they had…weight.

“Are you sure it’s love you feel?” she asked, a smile dancing along the corners of her mouth. Her eyes flicked down to his crotch. “Or something else entirely?”

“Now I know I’m in love,” he replied, the lust coursing through his veins. She was perfect. Fun. Bold. Smoking hot. And she was going to be his. All night long. He reached out and traced the curve of her cheek with his index finger. Her skin was flawless, warm and silky. “What’s your name?”

She paused and an odd, little smile formed on her lips. “Does it matter?”

Normally it wouldn’t matter—in fact, there was no reason why it should matter, but for some reason it did matter. It mattered a lot. “Yes.”

Her smile changed, softened, and Trask was awestruck by just how simply beautiful she was. “Rena. My name is Rena.”

“Rena.” He liked the way it rolled off his tongue.

“And what about you?” she asked, leaning closer to him. He looked straight down into her very ample cleavage and took his time enjoying that magnificent view. His fingers itched to caress that soft skin, to feel the weight of her full, round breasts in his hands. “Do you have a name? Or should I just call you the sexy Darkman of my dreams?”

“I do like the sound of that.” He wondered if his presence was affecting her, making her more daring than she’d normally be or if this was just her nature. He had the power to inspire humans to say and do outrageous things simply by standing beside them. His gaze touched on her flamboyant red hair and he thought—hoped—that it was her and not a consequence of his influence. “But Trask is so much shorter and to the point.”

“Trask,” she said, and he had to admit, he liked the way his name sounded on her lips. He couldn’t wait to hear her scream it. Her eyes trailed over him, her gaze a provocative caress that sent hot, tingling ripples down his spine. “So, now that you’ve declared your love, what happens next?”

“Oh, you know, the usual.” He caught hold of a loose strand of her hair and twined it around his fingers. The tension between them rocketed up a few notches and he inhaled the essence of her arousal, breathing it deep into his body, relishing the flavor of her. “A whirlwind romance, storybook marriage, honeymoon in Paris.”

“Followed swiftly by a quickie divorce in Mexico, right?”

Her voice was tinged with unmistakable venom and the bitterness sliced through the hazy, plush cloud of their lust. Startled by the mental slap in the face, Trask dropped his hand back to his side. Darkness deepened around him as anger settled in. He did not like this turn of events at all. “What makes you think I’d do anything quick with you?”

“I see,” she said, and he watched her features soften as her mood shifted. Humans were so extraordinarily complex. He didn’t think he’d ever understand their ability to feel so much, so quickly and thoroughly, even when those emotions were completely contradictory. Demons were defined by their desires, embodiments of the thing they hungered after. There was never a reason for a demon to feel anything more than his driving need. Everything else just got in the way of the goal.

Her bitterness ebbed away, gone almost as quickly as it had come, and she favored him with a dazzling, flirtatious smile. “You’re a slow-and-steady kind of guy then?”

She laughed, a lovely, musical sound that tugged at his insides. She leaned into him, a whisper of space between them and he could feel the heat of her body on his skin. “Hmm,” she said, and bit down on her lower lip. Her fingers flitted over his collarbone. “I do like confidence.”

He caught her hand and brought it to his lips. “Then you’re definitely going to like me.”

World-renowned neurosurgeon, jet fighter pilot, secret member of American royalty, seducer of legions of beautiful, outrageously sexy angels and demons and vampires and werewolves and the occasional pirate, Lisa Fox has done it all…in her own mind. In reality, she can generally be found at her desk with a cup of coffee close at hand. Or maybe a martini. It really depends on the day.