Channeling the Cat by Lisabet Sarai 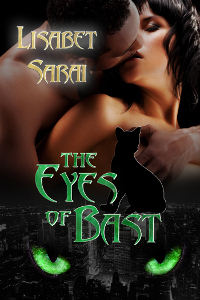 It’s almost a joke – the common association between authors and cats. I haven’t done a systematic survey, but I would estimate that at least 75% of the authors I hosts as blog guests mention feline companions in their bios. I’m no exception. I currently have two cats who traveled with us from the United States to southeast Asia ten years ago, and who have settled in quite comfortably.

Many explanations have been offered for the feline-author affinity. A cat doesn’t need to be walked, so we can spend our time at our desks as opposed to trucking around on the street scooping up their business. Cats are mysterious creatures with many layers of personality – rather like effective characters. Cats have an elegance and precision of movement we writers might use as a model for our prose. Many authors have cited their felines as sources of inspiration. Noted Canadian writer Robertson Davies once said “Authors like cats because they are such quiet, lovable, wise creatures, and cats like authors for the same reason.”

The other day, I was suddenly struck by a new theory. I was thinking about the fact that so many authors report hearing “voices”. “I just listen to my characters, and write down what they say,” one of my guests commented. Writing sometimes feels like something driven from outside, beyond our conscious control. Well, what if that’s true?

Ridiculous, right? But Mr. Toes sits behind my monitor most days I’m writing. He pretends to be asleep, but if I should get up for a bathroom break or a drink of water, he stirs and gives me a look, as it to say, “Where are you going? The story’s not done yet!”

I grew up with cats. I grew up writing fiction. When I went off to college and then grad school, I left the felines behind, and although I wrote lots of poetry during that period, I didn’t pen a single story. Then I met my husband, a confirmed ailurophile, and filled my life with felines once more. Next thing you know, I was a published author.

Ever tried to write when your cat was sick? Tough to concentrate on the tale, isn’t it?

And wouldn’t this explain why our characters are larger than life? Why they have so much vitality, such powerful passions, such intense adventures? How could a mere human imagine such creatures? Cats, though – they have superhuman abilities. Just ask them.

Of course to really test this, we’d all have to get rid of our felines and then see if we could still write.

If I’m channeling my cats, I’m okay with that. As long as they don’t want their names on the cover.

Meanwhile, I’ve finally written a story in which a cat has center stage. The Eyes of Bast is a shifter tale with a difference. Read on to learn more.

Tom finally broke the kiss and leaned back with a sigh. “Ah, Shaina! I should never have allowed you near me. But I was so very lonely… I wasn’t thinking straight. Now I’ve put you in danger too.”

“Danger? What kind of danger?” I reached over to flick the switch on my reading lamp, so I could read his expressions. Then I seated myself cross-legged at his feet and clasped his hands in mine. “Tell me, Tom. Tell me everything.”

“You will not believe me.”

“How could I not believe after – after what I saw this morning?”

His brows knotted together. “I never wanted you to see – I was careless…”

“But I did see. And now I know, at least something about you. But I don’t know enough to help you out of whatever trouble you’re in. Tell me the whole truth. I promise I’ll keep it private, if that’s what you want. And I promise I won’t be shocked.”

Tom’s lush mouth twisted in a grimace of disgust. “You might not be able to keep that promise. But never mind. You’ve asked. I’ll tell you.”

He stared off into the distance, above my head. “I was born in a small town in coastal Maine, about seven years ago.”

I choked down my cry of surprise. How could it be…?

“Yes. I was born under a wharf. I spent the first six months of my life as a black kitten, a stray living off the scraps from the fishing boats and clam shacks. Then she caught me and made me her prisoner.”

“I don’t even want to utter her name. There’s danger in the very word. She is a witch, centuries old, a practitioner of the darkest arts – the epitome of evil. Out walking one evening along the rocky shore, she caught sight of me and wanted me as her familiar. It was easy for her to lure me into her clutches.

“At first she just used me to facilitate her spells. The rumored powers of black cats are more than just legend. Before long, though, she began to experiment.”

His ominous tone sent a chill through my naked body. I pulled the towel around me.

“You see, her advanced age hadn’t diminished her lust. Quite the opposite. She wanted a sexual plaything, someone she could use to satisfy her perverted desires. A male body she could own and control. So she delved into her books of magic, seeking a spell that would turn her poor innocent feline familiar into a man – at least when she wanted him that way.

“Her first attempts failed.” Tom shuddered at the recollection. “She barely managed to save my life. I guess she’d grown fond of me at that point – in her own twisted way.”

“Finally, she found a ritual that would change an animal into a human during the hours when the sun was banished from the earth. I’ll never forget the terror of that first transformation, when I found myself wobbling on two legs in front of her naked body. It was even worse than what came after.”

“Oh, Shaina – I was human, but scarcely a man. I was barely thirteen.”

Shaina Williams’ grandmother bequeathed her that wisdom, along with a old pendant from the Islands, carved from an ocelot’s tooth. When instinct tells Shaina to visit the feral cat trap she’d set in Central Park, she listens to that inner voice, She discovers she’s caged a magnificent black tom, but the cat inexplicably vanishes after she tends to his wounds. Seeking the errant feline, Shaina encounters instead a handsome stranger whose slightest touch sets her body on fire. As the day dawns after a night of ferocious passion, her mysterious lover is forced back into his true shape – the tomcat she’d rescued.

Born a cat, Tom was transformed into an unwilling shape shifter by a sorceress who craved a human plaything to satisfy her perverse lusts. Centuries old and irresistibly powerful, Delphine Montserrat will stop at nothing to find her runaway familiar. Shaina vows to do whatever is necessary to defeat the vicious but seductive witch and save the man she believes is her soul mate – even though it might mean losing him forever.

Now that I’m grown up, I create my own tales of wonder, weaving in generous portions of human desire with its potent enchantments. In my paranormal tales, love works the most powerful magick.

Find out more about me and my books at my website, Lisabet’s Fantasy Factory (http://www.lisabetsarai.com) and my blog Beyond Romance (http://lisabetsarai.blogspot.com). I also hang out on Goodreads (http://www.goodreads.com/author/show/83387.Lisabet_Sarai) and Amazon (https://www.amazon.com/author/lisabetsarai).  I also have a VIP readers email list where I share release and contest information and run exclusive monthly giveaways. To join, just email me: lisabet [at] lisabetsarai [dot] com.

The 8th Instalment of Demon Interrupted: A Lakeland Witches Story → ← An ETO Award … And it Has My Name on It!
© 2022 K D Grace
Site created and maintained by Writer Marketing Services