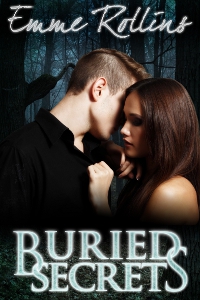 Should some secrets remain buried?

Dusty has always been a hothead, far more impulsive than her twin, Nick, the calm, cool and collected one of the pair. But Nick is dead, found murdered in their local cemetery, and Dusty simply can’t rest until she finds out who–or what–has killed her brother.

Sure the local authorities aren’t being straight with her–or anyone else–about what’s been going on in their little upper Michigan town, Dusty delays going off to college for a semester, defying her father and stepmother and taking a job in the local bar to start doing some digging.

Her focus soon fixes on Shane, her brother’s best friend and the town bad boy. The tension and rivalry between Dusty and Shane has always been palpable and sparks fly as the two collide. Dusty finds herself sinking in deeper with Shane and the mystery of what happened to her brother–and a lengthening list of victims–grows even stranger.

When everything comes to a head, Dusty focuses on one thing: What happened the night her brother was killed in the cemetery? She’s sure Shane is keeping a secret and she’s determined to find out what it is, one way or another.

“Nick told me something the last time I saw him… alive.”

She closed her eyes, not sure why she was telling him. Maybe it was the way he turned his head toward her before inhaling deeply, like he was trying to breathe her in. Maybe it was the way he cupped her shoulder in his hand, like he was holding something delicate—a tiny field mouse or a baby bird—and he was trying to be careful not to startle it. But mostly she thought it was the memory of his kiss in the darkness, the way he had taken it, how he had groaned and given into her response in that one brief moment before his senses returned.

“What did he tell you?” Shane’s spine straightened slightly, breath catching in his chest. He went completely still, like a deer caught in the shine of a poacher’s flashlight.

“He said he saw the way you look at me.” She hesitated, hearing his intake of breath when her hand moved to his thigh. Leaving it there, halfway up, she rested her head in the crook of his shoulder, feeling him breathing again. “And he saw the way I look at you.”

“What, exactly, is that supposed to mean?”

“Nick said he had the feeling, if he hadn’t been around, we might have ended up together.” Dusty lifted her chin to see his reaction. He didn’t look surprised, not like she had been. They were very close now. Close enough she could see the reddish stubble on his cheeks and the gold flecks in the light blue of his eyes and that little divot above his lip. She had the impulse to touch him there and repressed it.

“You and me?” he asked, pondering it, lips pursed in thought, making her think about that damnable kiss. She didn’t understand why she was feeling this way. First, the funeral home. Now they were both sitting on her brother’s grave. What was it about her dead brother that revved up her libido around Shane? It went beyond crazy and slipped into the realm of the surreal.

“You and me.” She nodded slowly, fascinated by the shape of his mouth.

“I don’t know.” Shane blinked those striking blue eyes at her, both eyebrows raised. Her attention was drawn down to his mouth again when he licked his lips, drawing the lower one thoughtfully in before asking, “What do you think?”

“I don’t understand why…” She didn’t. She didn’t understand any of it. Her world made no sense anymore. Nick was dead and Shane was here, offering her comfort and something else—she didn’t even know what—after all the years they’d spent sparring and going after each other’s throats.

But he’d come looking for her, had known she would be in the closet. He’d known her temper well enough to hold her back when she would have gone after the idiotic sheriff with her bare hands. And he’d held her and rocked her and let her cry when she needed to, which was far more than anyone else in her life seemed to want to do.

She didn’t understand it, but she knew she was feeling it. And whatever “it” was, it was powerful. Magnetic. It made her want to act, to do something reckless, careless, shameless. It made her feel like she had in the closet of the funeral home, ready to strip down to nothing and give into the feeling. It made her feel like doing that now, right here, on her brother’s grave. It felt wrong and right at the same time.

“What don’t you understand?” he prompted.

Dusty took a deep breath, reaching out and doing it, touching that little divot above his parted lips. She didn’t stop there, tracing the delicious shape of them, feeling him go still again, but it was different this time. This sort of stillness was more predator than prey. It was like the watchful, waiting crouch of an animal.

“I don’t understand why,” she whispered, swallowing as she let her finger trail down over his Adam’s apple, feeling him swallow. “But I think Nick wanted us to kiss and make up.”

“Do you want to?” He turned more fully toward her, the question in his eyes.

“Kiss?” Her finger traced the V of his t-shirt, his jacket still undone.

His lips were slightly parted, wet. So were hers. They were so close she’d lost focus and longed to close her eyes. Her body thrummed, so very alive, and the irony didn’t escape her because they were surrounded by death. Everything else faded away, lost its shape, until all she could focus on was Shane’s presence, the heat of his body, the way his hands moved down the curve of her shoulders to grip her upper arms.

“I don’t know why,” she confessed, finally letting her eyes close in anticipation, feeling him drawing her closer by micro increments. “But yes. Yes. Yes.”

She whispered the last three words, her lips almost touching his. His breath was warm, fruity and sweet, fingers tightening their grip on her arms.

Emme Rollins is Top 100 Amazon Bestselling New Adult/Mature Young Adult fiction. She’s been writing since she could hold a crayon and still chews her pen caps to a mangled plastic mess. She did not, however, eat paste as a kid.

She has two degrees, a bachelor’s and a master’s, one of which she’s still paying for, but neither of which she uses out in the “real world,” because when she isn’t writing, she spends her time growing an organic garden to feed her husband and children (and far too many rabbits and deer!) where they live on twenty gorgeous forested acres in rural Michigan.

She loves tending her beehives (bees are wonderful pollinators and Hello!? Honey!) and keeping up with her daily yoga practice and going for long walks in the woods with her boxer, Rodeo, who loves chasing squirrels almost as much as Emme loves writing!