Lucy Felthouse Caught in the Act

Kojo Black from Sweetmeats Press asking me to write a story for an anthology seems like such a long time ago now. Flattered that he’d asked me, and even more so when I found out who my fellow bookmates were going to be, I then started to panic. The theme was voyeurism – so broad, and therefore a ton of scope. My brain flailed about madly trying to come up with something. And then, finally, my poor abused grey matter came up with the goods. 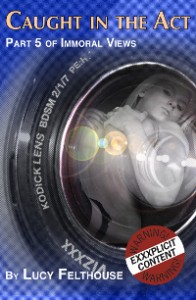 The next challenge was making sure my story would extend beyond my usual 2 – 4k short story range. Kojo wanted something between 7 – 12k, if I remember rightly. Since then, I’ve penned much longer works and am clawing my way towards novel length works, but at the time, I was terrified. I needn’t have worried. It meant that I could create a lot more build up to the climactic scene, which, consequently meant I could tease and torment the fuck out of my lead character. Poor Dave. He never knew what hit him. I turned a perfectly respectable Police Constable into a voyeuristic slave to kinky sex.

And he loves every minute 😉

Here’s the blurb and an excerpt from my story, Caught in the Act, to whet your appetite:

Police Constable David Beckett is just a normal guy, living a quiet life. His only excitement comes from his job – and even that’s not exactly been a barrel of laughs just lately. That is until his colleagues burst into the office one morning, full of tales from the night shift. Tales that cause Dave’s curiosity to get the better of him. Some idle surfing on the Internet opens up a whole world that Dave never knew existed – and he’s fascinated. After watching an amateur video, things escalate quickly and Dave finds himself drawn into a kinky lifestyle that could cost him his reputation – and his job.

When the door banged open and a group of his colleagues piled into the room, Police Constable David Beckett jumped, almost spilling his 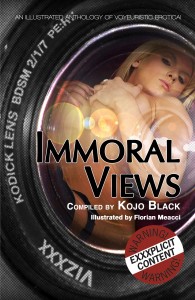 coffee onto his computer keyboard. He’d been enjoying a nice, peaceful game of Solitaire before beginning his shift and now they’d screwed his concentration, not to mention his high score. He closed down the game resignedly and wryly observed his workmates as they got whatever was riling them out of their system.

They were jostling and nudging one another, and there was some serious eyebrow wiggling going on. PC Beckett, Dave to his friends, could only guess that one of the guys had a new girlfriend and was being teased about it. Heaven knows, he’d been on the receiving end of such ribbing more than once, which is why he now kept his – currently non-existent – love life as private as he possibly could. Of course, that didn’t put a complete end to the teasing, as he now had to put up with the occasional joke about his sexuality.

Whatever it was they were talking about, it had gotten the guys seriously excited. As they drew closer to his end of the open plan office, Dave began to pick up snippets of the conversation. It didn’t help him to work out what was going on. In fact, it was like they were speaking a different language. He frowned, wondering if there’d been a TV show on last night that he’d missed and they’d all watched. He wasn’t much of a TV buff and was always the last to catch on to shows everyone else was glued to. But of course they’d all been on a night shift last night, so it couldn’t be that. Dave waited. He knew he’d find out soon enough.

As some of the boys began to move towards Dave’s end of the office, it was like they’d only just realised he was there. Instead of shouting the customary greetings across the room and settling down at their own workstations, several of the PCs congregated at Dave’s desk. They were still wearing stupid grins and Dave was, by now, was getting fed up of being the last one in on the joke.

“So,” Dave said, eager now to find out what all the excitement was about, “what’s going on?”

“Mate!” said Tim, “You wouldn’t believe what you missed last night on shift!”

Sharing stories wasn’t uncommon within the office, particularly if they were funny ones. But in their line of work, there wasn’t much that was classed as unbelievable any more, so Dave knew it was going to be something of note. He raised his eyebrows inquiringly.

Tim continued, obviously desperate to impart the news. “We got a call sayin’ that there was some drug dealing goin’ on in a car park. It sounded pretty big, so we did a raid. Only, when we got there, it wasn’t quite what we expected.”

Tim glanced at the other two guys with him, Jamie and Chris, and the three of them burst into hearty guffaws. Dave looked around the room, and a couple of other officers who must have also been there were peering over at them out of the corner of their eyes, with smirks on their faces.

“Well!” he said, getting annoyed now, “What is it? What happened?”

“Fucking hell,” said Jamie, “keep your hair on, mate. You’ll think it’s funny, too, honest. We’re just sorry you missed it. Go on, Tim, get on with it.”

Pulling himself together, Tim looked back at Dave, his eyes still crinkled with mirth. “Sorry, buddy. Anyway, as I was sayin’, we gets to this car park at the back of the country park, you know the one” – Dave nodded his acquiescence – “and drive in. We’re going in pretty stealthy as we don’t want anyone disappearing off into the bushes so when we pull up, they’re still gettin’ on with what they were doin’.”

He paused for breath, and Dave waited, knowing this couldn’t possibly be the end of the story.

“Naturally, we was a bit confused as to why they hadn’t spotted us yet. Normally they’re a bit more alert, aren’t they?” The question rhetorical, Tim continued, “So we got out of the cars and got closer, thinkin’ surely someone has heard or seen us by now. Personally, I wondered if they were all so out of their trees that they had no idea what was goin’ on. By the time we got on top of ‘em, though, we saw what the problem was.”
Dave raised his eyebrows, waiting for the punchline. It didn’t take long.

“They weren’t drug dealers, mate!” he said, clapping Dave heavily on the shoulder, almost making him headbutt his computer screen. “They were doggers!”

Want more? Check out the buy links for Immoral Views and Caught in the Act. 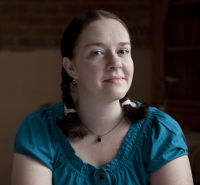 9 Responses to “Lucy Felthouse Caught in the Act”