Looking Back at The Collector with Kay Jaybee 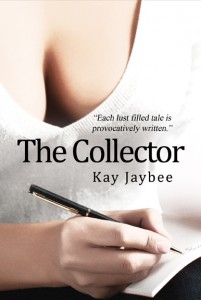 A massive thank you to my lovely friend Kd Grace, for allowing me to gatecrash her site once again!

She may look like she is scribbling randomly in her notebook, but she is secretly listening to, and recording, the overheard fantasies and indiscretions of others.

Forever hungry for stories, when The Collector’s sources run dry, her appetite for tales of instruction and voyeurism drives her to do some research of her own

before sharing her provocative experiments on paper.

It is time for the world’s raunchiest chronicler to come to light.

I admit the idea of writing a novel- 80,000 words about only one set of characters was rather daunting in those early days of my erotica career- so I began to consider ways to get around that problem. Short stories…but linked together by a single voice…

Then, as I sat in the airport that day, watching people rush around, my mind strayed further…what stories would all the people zipping around the departures lounge have to tell if I was brave enough to ask them…Then I began to listen to what people were talking about on the chairs around me. I watched how people behaved, and then I started to write it all down… The Collector was born.

Here’s a little extract for you…

The general din from the concert behind me had reached such a level of confusion that hand signals were now the only possible means of communication. As I slowly inched closer to the bar I began to wonder how on earth I’d get our drinks back through the heaving mass of people.

Thankful that I wasn’t claustrophobic, I slowly shuffled along with the crowd. I could still move my arms but, otherwise I was almost totally immobilised. For some unseen reason we had all come to a complete full stop. Being above average height gave me the advantage of spotting potential “sliding into gaps” opportunities, but eventually I had to accept that I was going nowhere fast, and was destined to remain thirsty for some time.

I looked around at my temporary colleagues. Apart from hair colour, and a stab at gender, I couldn’t really tell you much about the people who were standing so close to me that we knew what the sides of each other’s legs felt like.

My mind started to wander. A thirty or so deep crowd of people, all piling in one direction – what were they all thinking? How many pockets had been picked? How many people were accidentally on purpose feeling up the person in front of them?

I began to imagine how I’d react if a strange pair of hands started to stroke my arse as I stood there, unable to move, my protests going unheard.  My hands began to itch as I turned my attention to the person directly in front of me. Female, above average height, red hair in tidy bunches, short skirt; older than eighteen I guessed, perhaps younger than twenty five.

I was so close to her that as I looked down I had an excellent view of the top of her head. My crotch was already lightly rubbing against her flimsy skirted rear, and the urge to put my hands over her shoulders and slide them down onto her breasts (which my imagination had decided would be both full and firm), was overwhelming.

I still can’t believe I did it. What if she’d screamed? I’d have been arrested for sure, if anyone should have had heard her.

I would like to be able to say I’d been tentative and gentle; testing the water. But I was straight on, squeezing her tits hard (which were actually small, but beautifully tight). I felt her body stiffen as her attempts to instantly turn around were inhibited by the general crush. I tensed, expecting a slap across my kneading digits. It didn’t come. Instead her body shuffled within its confined space, her own hands slipping behind her and flipping up her short skirt to reveal a pair of neat pale buttocks encased in creamy lace knickers, which she pushed against my hard confined dick…

You can buy The Collector from: 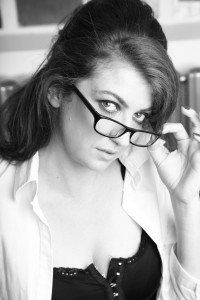 Kay Jaybee was nominated as the Best Erotica Writer of 2013 by the ETO.

2 Responses to “Looking Back at The Collector with Kay Jaybee”