I’d like to welcome a special guest from wintery Downunder.  The fabulously versatile Keziah Hill not only writes erotica and crime but is also a keen gardener. Truly a woman after my own heart! Welcome to sunny (ish) England, Keziah! It’s a pleasure to have you on my site!

Thanks for having me on your blog KD.

While you’re probably reveling in the spring glory of the merry month of May, down here it’s autumn which also happens to be my favorite time of year. I live in a cool climate part of Australia, about 100ks west of Sydney in the Blue Mountains so as I write there is frost on the ground and it’s 2C. But the sun is out and it’s turning into a glorious day.

This morning, while snuggling into my warm bed, I started to concoct lists in my head about all the writing projects I have to finish. That got me into a mild panic and out of bed. The big one is my crime novel which I want to pitch to a couple of editors at the annual Romance Writers of Australia conference in August. I’ve been working on it for a couple of years and it’s nearly there. Giving myself a deadline will make me work harder!

But nagging away at the back of my mind are all the stories waiting in the wings. Characters who want their day in the sun and stories that keep revealing their twists and turns at strange moments (like at three o’clock in the morning). I have folders created on my computer with odd notes, paragraphs of dialogue and the beginning of character sketches of a whole range of stories.  I have to resist the siren call of a new story so I can finish what I’m working on. 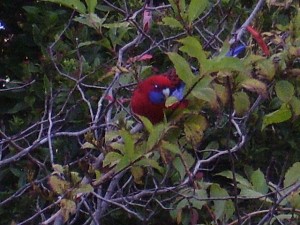 My latest story, Chains of Revenge is in an alternate, semi-fantasy world containing a warrior who was once a sex slave and princess who once owned him. Their power struggle was a lot of fun to write. A sequel is one of the stories that keeps nagging at me. That, and a story about two cultures with different and conflicting moral codes about sex and how the hero and heroine negotiate their way through to their satisfying ending; and another story about a minister of religion and a sex shop owner. Mmm. There does seem to be a bit of a theme here.

A part from getting all these words on the page, my garden also calls to me, particularly at this time of year when roses need to be transplanted and trees pruned. But I’m very fortunate to have some gorgeous critters in my garden including this crimson rosella.

Here is an excerpt from Chains of Revenge.

Lissa, Princess of Horvald, waited for Death. She stood, still and silent in the dank chill of the Great Hall, determined to meet her fate without cowering in fear. But fear hovered, beating against her mind like moth wings, relentless and inescapable.

Her father, the King of Horvald was gone, swallowed up in the vicious cycle of victory and defeat. Now there was no protection for her, no way of avoiding the steady creep of defeat as it seeped through the walls and curled under the doors, like a foul, poisoned miasma.

He wanted her, this Warlord called Death.

He’d killed her father and now demanded she appear before him to beg for mercy.

But she would not beg. Nor would she come at his call, like a whipped dog. If that meant her life was forfeit, then so be it.

A crash in the outer hall momentarily pierced her defiance, sending a cold finger of terror up her spine. She had no illusions about how this Warlord would use then kill her, but couldn’t stop dark, skittering panic flood her body when she realized his touch, full of hatred and violence, would be the last touch from a man she would ever feel.

No sweet strokes or murmured endearments. So different to the last time she’d lain with a man, long ago now. Lissa closed her eyes and called

up the image of brown, strong muscled arms and calloused hands that had held and soothed her, all the time whispering enchanting words of beauty and love. A yearning twisted deep inside her, making her gasp with pain. If only she could see him again, just one more time before she died.  She’d been such an empty headed fool all those years ago, thinking she was so powerful she could demand a slave to service her. That slave turned her life upside down and transformed her world. When disaster struck and her people needed her, because of him, she was ready to answer their call.

A piercing wail, suddenly cut off, ripped through the air. Death drew near. She glanced out the window and watched the distant wheat fields, the source of Horvald’s wealth, soon to be torched. Why hadn’t the burning commenced? All her work, gone. Would Devadas be pleased? Her slave in chains, the man she in the end, had loved with such hopeless desperation.

Another end loomed. Lissa heard more crashes and shouting, then the heavy thump of footsteps in the corridor. She continued to stand motionless in a shaft of late winter sun, and waited.

Not for long. The door slammed open and with it, the full realization of her father’s treachery.

No! Goddess above, no! All those wasted years!

Her past stood before her in mockery.

Tall, broad and forbidding, his body covered in leather and battered amour, Death stood in the doorway like the conqueror he was.

Chains of Revenge is available from Smashwords and Amazon.

After quite a few years working in the criminal justice system, I decided a tree change was needed so decamped to the Blue Mountains, west of Sydney Australia. Amid a garden full of flowering blossoms, roses and the odd marauding possum, I write steamy love stories where my characters get their happily ever after or at least their happy for now. You can follow me on Facebook and on Twitter. I also have an occasional photographic blog (not mine – other people’s) at The View From Here. I’m a voracious reader as well as writer so you can also see what I read at Goodreads. Several of my short stories can be read at the Erotica Readers and Writers Association.