Jenna Bright Shares the Story Behind The Lord of Summer

Today’s fabulous post from one of the nasty authors of Xcite Book’s new Secret Library series is a taste of British mythology and right up my alley. Please welcome the lovely Jenna Bright with her sizzling story, The Lord of Summer, from The Secret Library anthology, Silk Stockings. Welcome Jenna!

I’ve always been fascinated by the history of the British Isles, but my favourite parts are the ones we can’t ever know the truth of. I love the legends and the stories and the impossible tales. The hidden places, the secret spots, the areas of this country that haven’t changed in hundreds of years. The places where, if you hit them right, you feel like you might have travelled back across the centuries. And even more, I adore the mythical people and creatures from history, the heroes and pagan gods and magical beings. And my very favourite part is imagining how they might fit into our modern world.

That was the starting point for The Lord of Summer, my novella in the Xcite Secret Library Silk Stockings anthology. I’d been reading a lot about The Green Man at the time, about how his face, surrounded by leaves and greenery, shows up in stonework, on churches, in wood all over Britain and further afield. Nobody really agrees on exactly what he meant to the people who put him there, but there are plenty of theories. Was he a god? A sign of spring to come? A nature spirit? Was he Jack in the Green? The Lord of Summer? The Holly King?

Of course, the part that actually stuck in my brain was that he was generally considered a symbol of fertility.

One of the things I love most about the mythology of Great Britain is how it embraces sexuality and seduction as a natural part of the world. Something to be celebrated, rather than repressed. To be enjoyed, appreciated and revered.

I knew I wanted my slightly repressed characters to be sent to the back of beyond, to be stuck, without escape. I needed them somewhere mystic, somewhere where the old rules still applied, somewhere where they’d be forced at admit their hidden fantasies – and enjoy all the benefits that release brings. The rundown Green Man pub, backing onto a mysterious forest with hidden clearings and ancient trees seemed perfect.

I set the story during a (rare) British heatwave, letting the weather and the humidity bring simmering tensions to boiling point. And, obviously, it does have the advantage that it was even easier than normal to persuade my characters to take a walk in the shady woods and strip off their clothes…

I’m so delighted that this story is featured in the very beautiful, and strokeable, Secret Library series, and in such great company, too. I hope you enjoy all the stories!

Banished to the back of beyond, in the middle of a long, hot summer, Gem and Dan Parker find their marriage filling up with secrets. As they work to reopen the Green Man pub, tensions and unacknowledged desires come between them. From their first night, when Gem sees someone watching them make love from the edge of the woods, her fantasies of having two men at once start to grow and consume her.

As the temperature rises, she becomes fixated by her imaginings of an impossible, gorgeous, otherworldly man in the forest. A man who could make her dreams come true – and maybe save her marriage. 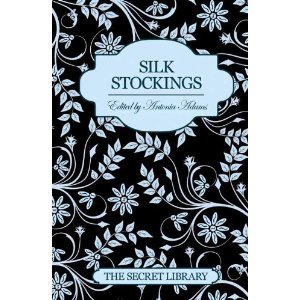 Gem couldn’t explain it. She’d been keyed up, feeling as if her skin were too sensitive, too eager for touch, ever since they’d arrived at the Green Man. But she could honestly say that right then, with Dan’s question – accusation, maybe – ringing in her ears, sex was the last thing on her mind. Fear, perhaps. Anger; with him for not trusting her, with Mark for putting her in this position in the first place. Even with herself, because she’d known this would happen, eventually. She hadn’t married a stupid man.

She’d been ready to fight back, ready to yell, to distract, to accuse – whatever it took to lead Dan away from the truth. But then …

A carving on the wall; smooth, dark wood, had caught her eye. She’d stared, just for a moment or two, taking in the curve of the face, the laughing eyes surrounded by leaves and stems and flowers. Just like the pub sign.

And when she’d turned back to Dan, the comeback she’d prepared died on her lips and suddenly her blood was beating with want.

She stepped closer, her body swaying with her desire, watching as his eyes darkened. Reaching out, she ran her fingers up his arm, the feel of his skin under hers enough to make her heart race. And her words, when they came, weren’t angry, or defensive, or anything but seductive.

‘You don’t really want to waste time fighting, do you? Not when we’ve got a tradition to uphold.’

That was all it took.

Dan’s arm snaked around her waist, pulling her tight against him, crushing her breasts to his chest. He lowered his mouth to hers, and she felt her nipples tightening as his other hand ran up her middle, popping open the buttons of her shirt. ‘I suppose there are some more important things we could be doing,’ he said, and the rasp in his voice made her shiver.

She loved this, loved him. Lived for the feel of his hands on her body, his lips on her neck. How could he think anyone else would ever measure up?

‘Far more important,’ she murmured, leaning her head back to allow him better access to her throat. His kisses burned a line down from her jaw to her breasts, nuzzling her bra out of the way. She gasped as his lips surrounded a nipple, licking and sucking and tugging as she felt herself growing wet and desperate.

Reaching down, she ran her nails up Dan’s thighs, knowing the pressure through the thick denim of his jeans always drove him wild. As she reached the top of his legs, Dan broke away from her breasts and spun her round so her back hit wood. ‘Not yet,’ he said, wrapping his hands over her hips to lift her up onto the polished surface of the bar. ‘I’ve got plans for you.’

Without giving her time to wonder what plans, Dan slid his palms down her thighs, only to push her skirt up around her waist, out of the way. Gem leant back on her hands, eyes half closed in anticipation. She knew what came next, could almost feel his mouth on her already. Even without everything else that was wonderful about him, the things his tongue could do were more than enough to make marriage to Dan blissful.

Head tipped back, Gem’s eyelids fluttered down as Dan ran his tongue along the line of her already soaked underwear. His fingers moved in closer, tugging them down her legs, and she kicked them away. His mouth was instantly back between her thighs, and she felt the hum of his appreciative moan buzz through her. Why had they been fighting again? What could possibly matter except this? Her ponytail hung down along her back, tickling her skin where her shirt had fallen away. Dan had unhooked her bra, she realised, and it hung loose from her arms. She shrugged the rest of the fabric aside, swallowing hard as Dan licked into her. No distractions. She wanted to focus on what her husband was doing to her body.

The tip of his tongue circled around her clit and Gem let out a moan, her head rolling to the side as her body shivered with need. For a moment, she caught a glimpse of her reflection in the window at the end of the bar; her breasts, freed from her bra, thrust out into the humid air, and Dan, bent between her legs, her skirt pushed up between them. Gem smiled. She looked … wanton.

Then the light changed, or the air moved, or something else that Gem couldn’t begin to explain. Because she wasn’t looking at herself, any more. She was watching a man, outside the pub, on the bridge, just beyond the window. Watching her.

Born with an over-active imagination, Jenna learnt early to channel her flights of fancy into stories. Later, she discovered a talent for creating sensual worlds filled with sexy scenarios, libidinous lovers and very arousing outcomes. She hopes that you enjoy reading them as much as she enjoys writing them.