Janine Ashbless Tells the Story Behind Red Grow the Roses

It’s my pleasure to welcome the amazing Janine Ashbless to my site today to share with us the story behind her sizzling, intense new vampire novel, Red Grow the Roses. Welcome, Janine. Do tell!

Hi KD – how great is it to be here on your blog!

You asked me for the story-behind-the-story of Red Grow the Roses, my new vampire-erotica novel. So here goes…

I wrote Red Grow the Roses because I was asked to. I was working for Black Lace at the time, and I was just happily starting on a new book of short stories, when the editor mentioned to me that he wanted only one paranormal title for 2010, that it “has to be vamps,” and did I want to write it?

My first thought, to be honest, was, “Me? You’ve got the wrong person!” I had written one vampire short for BL, but I’m actually on record telling the world I didn’t like vampires (This was in the days before True Blood, you have to remember. I’m now a huge fan of True Blood. I am not a huge fan of Twilight):

“Vampires do nothing for me. I mean – I am happy with them as predators, or as vehicles for introducing dominance and/or a little necrophilia to an erotic story; it’s when the author wants to use them as characters that my eyes glaze over. Why? It’s epitomised by a montage scene in Interview with a Vampire where the years pass over New Orleans. In these centuries human beings with their pitiful short lives have created beautiful art and architecture, established complex societies and communities, turned swampland into a thriving city. What have the vampires, with their eternal youth and their physical superiority and their accumulated experience, achieved? Well, they’ve killed some people and drunk absinthe. And one of them plays the piano a bit. Boring, boring bastards.” (From the Lust Bites blog)

But I said “Yes”. And then I sat down and thought about how I could do it. How to get a handle on vampire characters. How to write this from the heart and the head and the groin.

• I didn’t want to do a Laurell K Hamilton rehash.

• I didn’t want to write “human-girl-falls-for-immortal-vampire-Dom-and-gets-turned”. That’s been done too often before. (And, it turns out, after.)

• In Bram Stoker’s Dracula, there’s a real sense of spiritual horror about the vampire. He’s genuinely uncanny and disturbing. He’s dead. He’s cut off not just from human society, but from the grace of God. He has charisma, but the prospect of being turned by him is terrible. How could I recapture that sense of disquiet, for a readership that no longer automatically believes in God, and thinks that being immortal and super-powered sounds pretty cool, really?

• What I really wanted to write was short stories. I think erotica (though not romance) works best, for me, in short story form. That way you can have variety of characters and situations and kinks. And the poor reader doesn’t have to read the book at one sitting, and end up with wrist-cramp, just to get to the next bit of plot.

So, I thought, I’d write a book of short stories. Each would stand alone. Each would have a different protagonist and a different writing style. Each would feature a vampire, and together they’d add up to a single overarching storyline. They’d almost all be written from the point of view of the human beings whose lives are touched (and sometimes wrecked) by something both horrific and seductive. And I’d make it really bad to become a vampire, because yes they’re powerful and immortal – but as they get older, not only do they become more magical, but they lose their minds and their resemblance to humanity. The oldest vampire in RGtR is nearly incorporeal; she drifts about in mirror glass and other reflective surfaces, and is more like a predatory ghost than anything else.

How to tie the different stories together? Well, I’d do what I’d wanted for many years and structure it around the enigmatic folk song Green Grow the Rushes. That song creeps me out even before I start imagining what it references. You know the one:

I’ll sing you Ten-O,
Green grow the rushes-O!
What is your Ten-O?
Ten for the Ten Commandments:
Nine for the Nine Bright Shiners:
Eight for the April Rainers:
Seven for the Seven Stars in the Sky:
Six for the Six Proud Walkers:
Five for the Symbols at your Door:
Four for the Gospel Makers:
Three, Three the Rivals:
Two, Two the Lily-White Boys, clothed all in green-O.
One is One and all alone
And ever more shall be so. 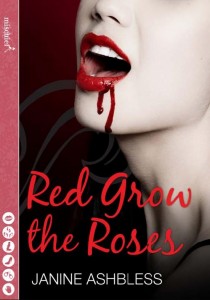 Each line would get a relevant story. That’d make it a real challenge to write! And I’d call it “Red Grow the Roses.”

The whole concept came to me in a feverish rush. After that it was just a case of filling in the blanks (like: how many vampires, what would make each one stand out from the rest, what sexual themes did I want to cover?).

So that’s what it is. Eleven different short stories, with points of view ranging across male and female, innocent to knowing to bitter; written in first second or third person; each narrative shedding light upon the others. One is a fairy tale. One is a romance. One is hardcore female humiliation. One is brutal male-sub. One is all Victorian Gothic corporal punishment. One is themed entirely around the names of rose cultivars.

Black Lace stopped publishing just before I finished writing this book. It would have been too long and too offbeat for them anyway, I suspect! (I turned down another publisher later because I was told to cut out the backstory between sex scenes). But now Red Grow the Roses has found a home with new publisher Mischief – and hopefully on many a Kindle.

Maybe you’ll be lucky. Maybe he’s not human. He’ll take you in his arms and you’ll feel his strength – a strength that makes it impossible to fight him. But you’ve already lost the will to resist, that moment he looked into your eyes and showed you all his hunger and his promise. You knew then. You knew that this is what you are for – what we are all for – with our warm beating hearts and our aching sexual needs.

We are for them.

There are six vampires in the city. Ageless, terrifyingly beautiful and always hungry – not just for blood but for the other pleasures the human body offers. Sadistic chanteuse Estelle; feckless Ben; Roisin, the mirror-ghost; Wakefield, haunted by his own damnation; Naylor, the most feral of them all.

And Reynauld is the Good Shepherd, the one who holds them all in check. But his grip on his own humanity is fading, and when Wakefield accidentally kills a woman and Naylor gets the blame, a power-struggle erupts between the city’s immortal undead.

Red Grow the Roses tells of bloodlust and sexual desire; for vampires the two are indistinguishable. These transgressive, startling stories draw the reader down the darkest and most seductive paths of pleasure – to where the monsters are waiting.

‘Oh, Doug. Is that how you ended up in the Church?’

‘I thought that if anyone knew about these things, if anyone had the answers, it had to be them.’

Unable to comfort him, she leaned in and kissed his lips softly. She was surprised and gratified when he took her hand and guided it to his groin, back to his erect cock.

‘Cerri,’ he mumbled, kissing her deeper. His hard-on jumped under her fingers, giving no sign of flagging, no sign that he’d already emptied all chambers. Uneasiness stirred in the back of her mind even as she ached to pull him into her. He’d stayed stiff as a pole all the way through his story.

The nasty suspicion, once formed, grew to monstrous proportions. Pushing him back, Cerri bent for a closer look. And there it was: yes. On the underside of his cock, near the base: two dints in the flesh, one a little higher than the other. Puncture-marks. ‘Fuck,’ she said hoarsely: ‘You’ve been bitten.’

‘You’ve been bitten already.’ She stared into Doug’s uncomprehending eyes, her voice rising. ‘He’s already had a piece of you!’

‘This afternoon,’ said a silky voice behind them. ‘Funnily enough, I don’t usually feel hungry during the day, but you were just so fucking sweet and irresistible. And the look on your face…’ Cerri scrambled round and saw the speaker, the vampire Naylor: beautiful, glittering and jagged as razor-wire. He was nested in the angle of the landing ceiling, arms spread like a blasphemous crucifix, clinging to the plaster by a network of dark tendrils that emerged from his flesh like cobweb, melding him with the shadows. ‘Rather like that look now,’ he finished with a ghastly smirk.

She knew she hadn’t seen him until that moment. She knew they’d been through every room of the house and if he’d been there he couldn’t have remained hidden. Not if he were human, anyway. ‘You were in the house all the time,’ she said, feeling sick. ‘We didn’t seal you out. You were already here.’

‘Uhuh. I’ve been here since last night. Not as clever as you think, are you girly?’ He slithered down from his impossible perch and landing on the carpet lightly, the shadow-tendrils hissing as they dissolved. Doug scrambled to his feet, yanking up his trousers and holding them with one hand. The other one sketched a cross in the air.

‘Didn’t work last time, won’t work this. You’ve too many doubts, little God-botherer. Plus,’ he added acidly, ‘I think the fact you’ve just hosed your scuzz all over your witch girlfriend’s tits might count against you. Pretty impressive, by the way – the spunk-show, I mean. And,’ he admitted with a long hard glance at Cerri, ‘the tits. I’d like to bite them off.’

‘Don’t you touch her!’ Doug barked. Cerri came up behind him and put her hand on the small of his back.

‘You should go, Naylor. You’ll only be making trouble for yourself.’

He tilted his head, an odd smile dancing in his eyes. ‘I should be angry with you, witch-bitch. You get in my way. You’ve gone and spoiled my dinner.’ His eyes, green as poison, narrowed as they flicked back to Doug. ‘But you know what? I’m not angry. You two just went and told me a lovely story. The most interesting story I’ve heard in years. And that’s why I’m going to play Mr Nice.’