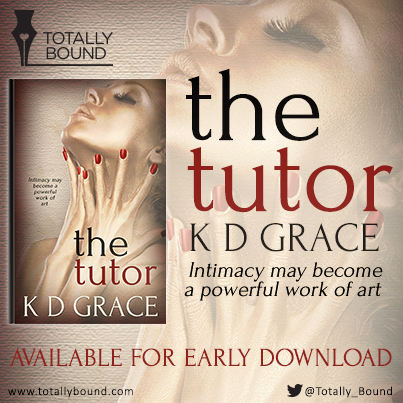 If you’ve been waiting for the 11th of October so you can download your copy of The Tutor and find out all about how canned pears can be an aid to romance, wait no longer! As of today you can download The Tutor exclusively from the Totally Bound website and get to reading before the official release date of 11th October.

Remember, if you’re into delayed gratification, you can still preorder The Tutor from the links below and practice patience and anticipation. And here’s a little snippet to make practicing patience a little harder. Enjoy!

For a long moment they sat in silence again, both wrapped in matching terry robes, both looking slightly worse for the 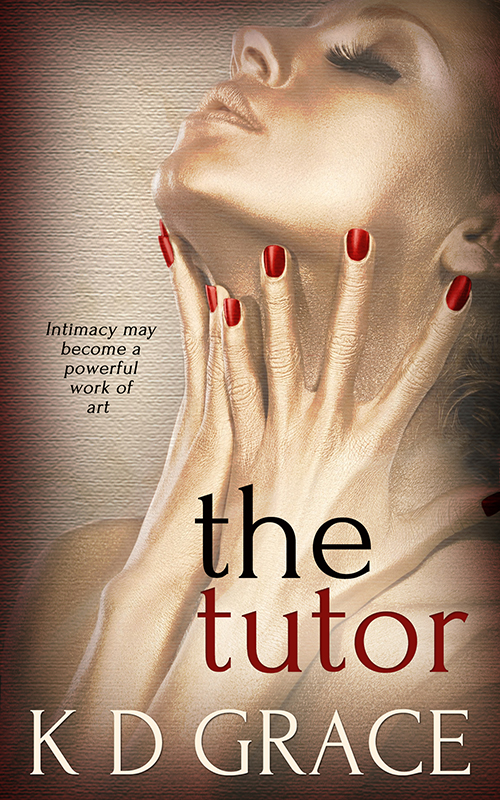 wear. He was okay with that. He could have sat there with her all night, but she broke the spell. “Lex, you’re exhausted. Do you think you could try to get some more sleep?”

“Stay with me.” The words were out before he could stop them. “If you stay with me, I can sleep.”

She stood and looked back at his bed and, for a dreadful moment, he though she was going to say no. “All right then, but your bed’s a train wreck. Why don’t you come to mine? It’s virtually undreamed in tonight. Besides I only allow good dreams in my bed.” She nodded to the open French doors and gave him an encouraging smile.

Back in the Meadowlark Suite she went to work on their sleeping arrangements, putting a barrier of pillows down the middle between them. It was a huge bed, just like his, so there was still lots of room. “There are enough cushions and pillows and throws for a herd of elephants to have a slumber party,” she said. “I don’t move much when I sleep, but this will make sure that I don’t accidentally touch you or you me.” She pulled back the covers and nodded to the space. “Get comfy and I’ll tuck you in.” He did as she asked, wishing desperately that they could lose the pillow barrier and he could take her in his arms and hold her all night and wake up with her still pressed against him. The thought made his chest ache with longing, but that she was here, that she was next to him, sleeping close, that would do. That was so much better than anything he’s ever been able to imagine for himself.

When she was settled in on the other side of the pillow barrier, he couldn’t keep from smiling. She was in his bed, well technically it was his bed, wasn’t it? She wore his engagement ring, and she did! She still wore it. She hadn’t taken it off. At least for the moment he could almost imagine the two of them as a normal couple climbing into their bed together after a hard day, lying close to each other before they both drifted off to sleep. What must that feel like? Would he ever know? If he ever did, at this moment he couldn’t imagine anyone he’d rather share his bed with than Kelly Blake. And just before he drifted off to sleep, he remembered that she had found him, she had followed him and come searching for him, both the other night in the sculpture garden and tonight. She had rescued him from the dream world and she hadn’t been repulsed by his neediness. She had stayed with him.

Kelly woke with a pillow tossed carelessly over her face and a heavy warm weight on her body. It was only when she moved slightly in an effort to dislodge whatever it was that she realized the heavy weight was Lex Valentine. She froze, heart summersaulting in her chest, right exactly where his head rested, dark hair tickling her chin. All around them she could see nothing but mounds of pillows, but there were none between them. There was nothing between them. His head lay between her breasts with one hand cupping her. One well-muscled leg was thrown over her body just above her hip, which his morning erection prodded enthusiastically. What the hell should she do? If he woke up like this, he would pass out or throw up or both, at the very least he would have a panic attack, but she hadn’t moved. He had found his way to her in his sleep, and he clung to her like he would a lover. Like he would a lover! That thought focused her enough that she made an effort to relax. It was human contact. The cost, from what she had seen yesterday — at least between the two of them — the cost was worth paying. His unconscious had known exactly what he needed, what he desired. So why not let his unconscious take care of the need he couldn’t yet take care of consciously. Did she believe that he would be able to at some point? She desperately wanted to believe that, and she wanted to be there when it happened. She wanted to be the one he took consciously into his arms.

His thumb brushed her nipple and she battled to hold still in the bed as it stiffened and rose against his stroking. The satin hardness of his erection surged where it pressed trapped between her hip and his body, and he began to shift and slide against her. She swallowed back a moan, feeling the rush of heat down low where her legs were spread. Had she slept that way, or was it an unconscious response to the nearness of him and his obvious need of her. She couldn’t help it, she wriggled slightly beneath him until she was a little more open and the rhythmic clench and release, clench and release, of her pelvic muscles mirrored his slid and shift, slide and shift. He squirmed and moaned and she froze, for a moment fearing he was waking up and once again at a loss as to what she should do to make it easier for him. But instead of waking up, he shifted more fully onto her until he was almost, but on quite on top of her. His cock pressed up against the inside of her thigh, and still he shifted and slid and moaned softly and, God help her, she found herself wriggling and grinding in an effort to get more fully beneath his body, in an effort the get him inside her. Jesus, she wanted him inside her! She wanted him inside her like she’d never wanted anything as his fingers curled around her breast kneading in rhythm to his shifting, in rhythm to the undulation of her hips. Then he took his hand away and she all but cried out in her frustration, catching herself just before there was any sound other than a heavy intake of breath. But there was very little time to dwell on the absence of his hand as he moved splayed fingers down the flat of her belly and wriggled his way into the top of her panties, there he rested his hand only for a moment on her pubic curls and she arched against it, effectively willing him to seek out the place where she needed to be touched. And thank fuck, he did! He found that place, and memories of the slippery pear half flashed through her head as he carefully, but urgently fingered her open and began to stroke and probe.

This was insane. He was asleep. She absolutely had to wake him before it was too late. If he woke up like this he’d be embarrassed as well as panicked. If he woke up like this he would think she was taking advantage, which she was. And then he found her clitoris, and she held her breath and dug her heels into the mattress to keep from moving as he circled her — first with his thumb and then with two fingers slick with her own lust. Then he found her rhythm and he thrust and scissored, circled and probed, exactly as she had told him she liked it, as she had demonstrated on the pear.

There was nothing she could do but let him touch her, let the feel of him wash over her in waves, the incredible sensation of being caressed so intimately by Lex Valentine. Her haze of arousal was sharply punctuated by his moans and grunts, not the sounds of distress, but the sounds of a man about to ejaculate. Though her own shifting and rocking had become almost entirely internal, she was there with him, right on the edge as he stroked and touched and tweaked. Christ, how could anything feel better than this? He stopped breathing. His whole body was one tightly clenched muscle, the shifting and sliding had become outright thrusting, and the moans and grunts had escalated to guttural growls. At some point, she didn’t know when it had happened, she grabbed onto the headboard to keep back the overpowering urge to touch him, to take him by the wrist and hold his hand down where she needed it, to grab him by the cock and stroke him until he came, or even better to guide his erection down between her legs where she wanted him most of all. But before there was time to think about it, he grunted, then grunted again, and she felt the warm wet of his release against her thigh. That was enough to send her over the edge. Try though she might, she couldn’t lie still, and Lex woke up.

“Kelly? Fuck!” His words were followed by a hard thud and a barely swallowed string of curses as he rolled off onto the floor.

“Christ, Lex, are you all right? Are you okay? I’m sorry, I didn’t know what to do. I should have woke you up.”

“You did wake me up,” he managed between gasps for breath. “Christ, woman, no one has ever woken me up like that before.” He groaned and rolled onto his side.

“Never better.” He said with a soft laugh that sounded somewhat painful. “I’ll be even better still if I can get the room to stop spinning. For a long moment there was no sound but the sound of his breathing. She wasn’t breathing at all, though she desperately needed to. She was too busy trying to listen to him, to make sure he was okay.