After a celebration launch breakfast with Wade and Carla in Wade’s Dungeon, involving a fabulous sampling of Pop Tarts a la Flannery and Marshmallow Cream chocolate coffee, a la Chrittenden, Wade and Carla invite me to join them for an early morning bowling session at Clyde’s bowling alley – the place that has inspired some of Wade’s most innovative inventions.

Right off the bat, I march up to the lane, take three steps, as everyone has instructed me, let the ball go and fall flat on my ass, while the ball with some serious momentum, gutters long before it gets to the pins.

Wade watches it nodding. ‘I’ve never seen quite that kind of back spin on a ball. I think it has something to do with the way you were off balance when you let it go.’ The earnestness of his observation makes me laugh as I wait for the ball return rubbing my bruised butt.

‘Is that engineer speak for what happens when you fall an your ass while swinging a bowling ball?’

‘Well I suppose there’s a bit of that,’ he says, rubbing his chin thoughtfully. ‘I can give you the mathematics of what just happened if you’d like.’ The man has shed his requisite black hoodie and I’m suddenly reminded just how well-built he is. He’s sporting a faded red t-shirt on which I can barely make out a diagram of a carbon molecule superimposed over the Coca Cola logo with the words Carbon Nation written in the Coke font. ‘But I don’t think it would help your game.’

This time I managed to stay on my feet and boldly take out one pin on the far left after the ball slo-mo’s its way down the lane. ‘I don’t think much of anything would help my game,’ I say.

‘Looks to me like your ball’s to heavy,’ Clyde says.

‘Heavy balls can be a real problem,’ Carla says around a mouthful of Doritos. Wade gives her a sideways glance. She shrugs and Clyde sniggers.

As Clyde offers me several lighter balls to try, I watch out of the corner of my eyes as Wade bowls a beautiful strike. Twice. ‘You’ve known him for a long time?’ I ask.

Clyde nods and the smile on his face reminds me of a proud father watching his well-accomplished son. ‘Couldn’t bowl a lick when he came in here the first time. Don’t know why he chose bowling over anything else. But I showed him the basics, and Crittenden being who he is, it didn’t take him long. Tried to get him to bowl with a league. Thought it would be good for him – you know some social interaction. He told me …’ Clyde chuckles, ‘Well what he told me wasn’t very nice, but made it very clear that he didn’t bowl to be social.’

We both watch as he leans close and whispers something to Carla, who laughs congenially and musses his hair before rising to bowl her own strike. Clyde nods and his smile broadens considerably. ‘That one, well, she’s way better for him than any bowling league. Take the fact that he invited you along to bowl, KD. That young woman can cajole him and pester him and tease him in ways I’ve never seen anyone do. I mean even Ellis Thorne knows not to cross the line with Crittenden, and they’re best friends. But it’s like, well it’s like with Carla, there is no line.’

‘You think he’s a better person for having her in his life?’ I ask, choosing a pretty blue ball with sparkles that may actually be too light, but the way I bowl, I doubt it’ll matter much.

‘Nah,’ he says, watching Carla deal surgically with a difficult split. ‘He’s always been a good person. Might have taken her to show him that. I’ve seen a lot of teamwork here on league nights. Some teams just click, and they win even when they lose. These two, well they’re like that together. They’re a team.’

‘It’s your turn, KD,’ Wade calls over his shoulder. I return to find him sharing a package of Ding Dongs with Carla.

‘You want one?’ Carla asks. ‘I have another package.’

I take the precious gift of junk food assuring myself that though I don’t usually eat such empty calories and I don’t have the metabolism these to do, it’s a special occasion and, let’s face it, sometimes the emptier the calories, the better they taste. 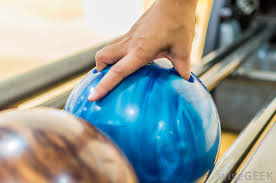 This time my bright blue ball takes a swath right out of the middle of the pins and I take a bow to the cheers from my audience of three. However I may well have taken my kudos too soon as the second attempt hits the floor with a kathunk and then promptly gutters.

‘So, back to work on the photovoltaic prototype after bowling?’ I ask Wade.

He’s just bowled another strike and we both watch Carla position herself. ‘Nope. We’re heading over to Stacie’s Clear-cut after this.’

We watch Carla bowl a split with a ball that curved just slightly too much to the right at the last minute. Clyde tells me that. I would have had no clue why. Carla calls the ball a few choice names and waits at the return.

‘In spite of the planting and the careful management,’ Wade says, returning to the topic of the clear-cut, there are still problems with erosion when we get heavy rains.’ He shrugs broad shoulders. ‘We always get heavy rains here, so I’ve designed a new type of ground cover that I hope will help.’

‘And I’m coming along to take a few photos and catch the story.’ Carla says, plopping down next to Wade. ‘Something that’ll fight erosion in a place with massive rainfall is big news.’

‘Almost as big as illegal cage fighting,’ Wade says with a twitch of a smile.

She shrugs. ‘Well if the inventor of the new ground cover will traipse around on the hillside in shiny shorts and no shirt, it would be a toss-up.’

Clyde and I snigger, and Wade waves me to take the floor with a quirk of a smile.

We bowl four games, and by the end, I’ve actually managed two Ding Dongs, a bag of Doritos and a Snickers Bar. Oh, and three strikes! Well a girl needs her strength to keep up with Wade and Carla in Clyde’s bowling alley.

Wade and Carla drop me in the parking garage at the Pneuma Building. I say my good-byes and wish the two well at the clear-cut. They both give me hugs and congratulations. Before they leave, Wade turns to me and offers me a rare full smile. ‘I’m looking forward to Carla reading the next chapter of your book to me. But that’ll have to wait till tonight,’ he glances over his shoulder at Carla who is now talking to one of her fathers security men, ‘Tonight after we’re home alone. It’s the Chinese food chapter, she tells me. Not for public consumption.’ Wade Crittenden actually winks at me … around a heroic blush, then he turns, pulls Carla in close to his side and I watch the two disappear into the Dungeon entrance from the parking garage.

The Interviewing Wade Blog Tour and Giveaway Begins Tomorrow, the 23rd. For the next two weeks find Carla, Wade and me on these fabulous blogs 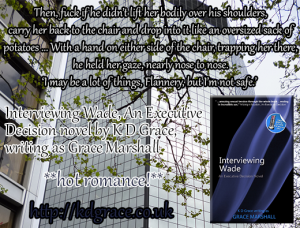 ‘What do you want, Carla?’ His abrupt change of subject derailed her before she could get started on her well-deserved rant. Who the hell did he think he was anyway? It was just an act of kindness, nothing more. Surely he wasn’t too stupid to see that. She watched, speechless as he hopped up and lobbed a killer ball that would have been devastating if it hadn’t guttered half way down the lane and rolled benignly the rest of the way to the soundtrack of half-hissed curses that would have hurt a sailor’s ears. She had no idea until last night that Wade Crittenden had such a colourful vocabulary. She watched his shoulders rise and fall in what she thought was the nerd’s last-ditch effort at some calming Zen. Then he took a deep breath and spoke without looking at her. ‘What do you want?’ He repeated.

Thanks to Devon’s poorly-timed call, it was far to late to sweeten him up, so she’d just have to go for it and hope for the best. She took a deep breath and said. ‘I want to interview you.’ She stuffed the notebook back into her shoulder bag, shoved it onto the seat and coming to stand by his side as he waited for the ball to return.

‘No,’ he replied, calmly taking up the ball and this time sending it waltzing right down the centre of the lane for a slo-mo strike.

‘Then you don’t need to interview me. They know everything I know.’

‘Oh I got great stuff from them, but people want to know about the genius behind Pneuma Inc, the mystery man. Come on, Wade, I promise I’ll be gentle.’

She gave a little squeak of surprise as he grabbed her by the lapel of her shirt, led her unceremoniously back to the seat and pushed her gently down in it. ‘No,’ he said. Then he grabbed the ball and bowled yet another strike.

‘I’m better when no one is bothering me.’ He tapped his fingers on the ball return in a definite ‘get-lost-Carla’ rhythm.

‘Look,’ she shoved out of the seat and came to his side again. ‘You’ve been hounding me to be a good girl, to play it safe, to stay out of danger, well…’

He picked up the returned ball and took his stance, with her standing right beside him.

‘What could be safer than me interviewing the mysterious Wade Crittenden of Pneuma Inc?’ She followed on his heels 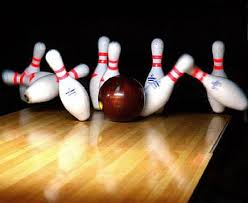 as he positioned himself, took three quick steps and let the ball go. She nearly rear-ended him at his quick stop.

He turned suddenly and she found herself cheek to chest with him. They were both breathing much harder than their little bowling waltz demanded. Then, fuck if he didn’t lift her bodily over his shoulders, carry her back to the chair and drop into it like an oversized sack of potatoes before the ball flattened all the pins. Again. With a hand on either side of the chair, trapping her there, he held her gaze, nearly nose to nose. ‘I may be a lot of things, Flannery, but I’m not safe.’ Before she could protest further, he turned and bellowed, ‘Clyde, Ms Flannery’s leaving. Show her out please. And then lock the damned door.’