In the Flesh has its Naughty Re-launch in London 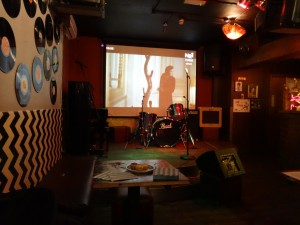 Wednesday night in London it might have been cool and raining outside, but inside the fabulous Alley Cat Bar, the atmosphere was hot and steamy. For four years Rachel Kramer Bussel’s In the Flesh was a popular monthly event on the New York street calendar and, to have the event re-launched in London by the fabulous Suzanne Portnoy, author of The Butcher, The Baker, The Candlestick Maker: The Intimate Adventures of a Woman Who Can’t Say No. was like a blast from the very recent past in a very naughty, very fun way. The event was sponsored by Xcite Books.

In the Flesh London hostess Suzanne Portnoy, who read at the New York event, said: ‘Although it held its 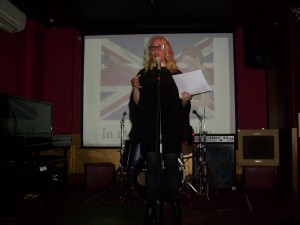 final reading in 2010, In the Flesh is fondly remembered by anyone who has ever written erotica. Authors would share their stories to get the audience hot and bothered. It was a great place where established and new writers/bloggers of erotica could share their work in a relaxed, convivial atmosphere. Many UK based authors performed there and now we are bringing it back to the heart of London, where we hope it will take on a new lease of life.’ And it certainly seems to have done just that.

In the Flesh New York had a reputation for being one of America’s rudest reading events. Plus it had cupcakes! And down the stairs in the basement that is the Alley Cat, 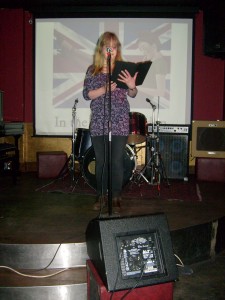 there was a wonderful incongruity in the dark, mirrored blues bar with its wall-décor of vinyl records and gigantic version of Barbarella playing against the back wall of the stage behind the drums and the cheerful, brightly-coloured plates of cupcakes set on each table. Rachel might not have been there, but her inspiration certainly was!

The venue itself has quite an amazing history. The Alley Cat is located in the basement of what was once the famous Regent Sound Studios on Denmark Street. Denmark Street has the honour of being the place where the Rolling Stones, the Kinks, Elton John and David Bowie recorded songs, but it’s also where serial murderer Denis Nilson worked in the Job Centre on the corner.

I felt a bit like I was making history, being among the readers for the first In the Flesh event in London. And reading with such fab names as Liz Coldwell and Jilly Boyd with Suzanne Portnoy hosting us was a real honour. Also, for me 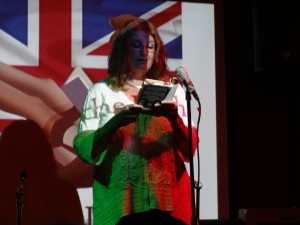 it was an even more special occasion for several reasons. First of all, Raymond’s sister, Cindy, brother-in-law Pat, and niece Juanita are all visiting from the States, and they came along to party with us — Juanita having just gotten off the plane from Miami. Second, my multi-talented cohort, Moorita Encantada, closed out the evening with a wonderfully wicked musical scene from our play, The Eye of the Beholder. As always, Moorita was stunning. 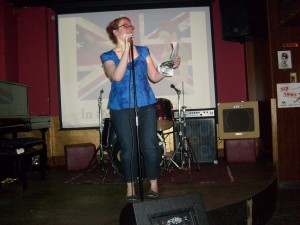 to listen to until the readings started. The house-sized Barbarella was then replaced with the sassy In the Flesh London logo just as Moorita with her fab OH, Daniel, showed up to get her sound system set up and make sure she had time to get into her Medusa costume.

The fabulous Liz Coldwell started the evening with a very hot m/m boy meets werewolf story that had everyone squirming in their seats. I followed on with one of my favourite scenes from The Pet Shop, breakfast with Tino, and Jilly Boyd had us all seriously craving fruit … er that should be fruit vendors … in the final reading of the day. 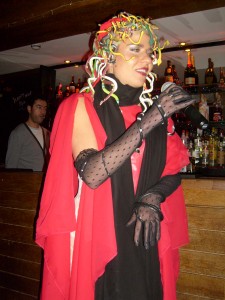 Then after a nice break for much-needed liquid refreshment to cool everyone down and more cupcake chomping for energy, Moorita Encantada took the stage as Medusa, the lead role from our burlesque play, The Eye of The Beholder. As always, Moorita did us both proud.

After the first In the Flesh London was officially over, there was time for more drinks and planning and scheming the next one. As was the tradition of the original, In the Flesh London will happen regularly last Wednesday night of every month in the Alley Cat from 6:30 to 8:00. All erotica writers and bloggers who are interested in reading should contact Alison at Xcite. Alison@accentpress.co.uk

My Walk of Life → ← Consenting Adults: Let’s Stop Beating Around The Bush