My firstborn, The Initiation of Ms Holly, has had a wild couple of years in her young life. She’s found her way into the national newspapers, she’s made it onto national television and radio, she’s made it to number one on the Amazon UK paid erotica chart and on the free chart, and she’s in her third printing with Xcite books. Holly has even made her way into public libraries all across the UK!

Holly has done the Coast to Coast walk across England with Raymond and me in a zip lock bag. (We couldn’t find any waterproofs in her size). She’s been to Las Vegas where she was read from at the famous Flamingo hotel. She’s been on the bookshelves in WH Smith stores in airports, train stations and along the motorways. That girl is well travelled! And she’s about to get more so!

I’m very happy to announce that Xcite Books have sold the US and Canadian rights for The Initiation of Ms Holly to Sourcebooks. Next year there’ll be a new print edition of Holly coming out in the States for US and Canadian distribution, and Holly will become way more well-travelled than her creator. I feel like a proud mum sending my baby out into the big wide world all grown up.

And almost as a sign of good things to come, Holly hit the number one position on Amazon UK’s free chart for erotica in the middle of a week-long Valentine’s promotion. She does well, my first born, and the best is yet to come. Who me? Proud??? You betcha! 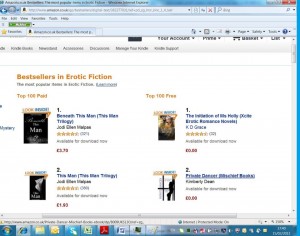 ‘I’m claustrophobic’ her words were thin and shaky, as though she didn’t fully trust herself to let them out. ‘It wouldn’t be so bad if I didn’t 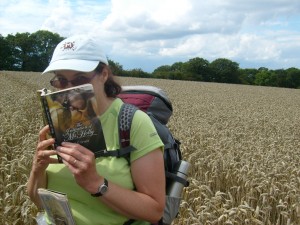 know where we are.’ For an embarrassing moment, she realized she was still clinging to him, but the embarrassment passed, and suddenly she didn’t care. If they were going to die trapped in a train in the Eurostar tunnel, buried beneath a gazillion gallons of water, she’d just as soon not do it alone.

Burlesque Meets Mythology: Teaming Up with Moorita Encantada → ← Lexie Bay and Doug, Passionate Partners on the Wild Side

One Response to “Holly Crosses the Pond Bigtime with Sourcebooks!”