Why Just Anybody Can’t Write Sports Romance by Cassandra Carr 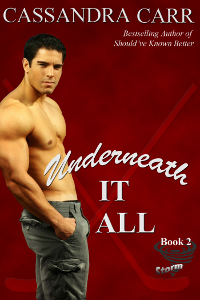 There’s the old adage – write what you know – and it’s true for sports romance. While there are many things a writer can fake, I think accurately portraying athletes, both off and on the playing surface, is far harder to get right.

I’m part of a group blog for sports romance and one of our writers recently posted on our internal Yahoo group that she’d read a hockey romance where a team won by two goals in overtime. If that writer truly knew hockey, or had taken the time to do even basic research, they would’ve known that overtime in hockey is sudden death – you can’t win by two goals.

Many other professions can be faked because policies and procedures are not the same across the board. An example of this are police procedurals. I live in the Western New York area and my Romance Writers of America chapter had a detective speak to us a couple of years ago. She mentioned that in Amherst, a suburb of Buffalo, interrogations are not recorded, whereas in the City of Buffalo they are. So as an author, you can use whatever works for your story and you’ll still be right, because there’s no one right way to do things.

But in sports, there usually is.

All football games have four 15-minute quarters. All hockey games have three 20-minute periods. Football fields are the same size. Hockey ice surfaces can differ somewhat depending on where the game is played, but overall there are the same lines, face off circles, etc no matter where the rink is located.

And what’s hardest of all to get right in sports romance is the behind-the-scenes stuff, whether it’s the locker room after a game or the athletes’ lives with their families. There’s a mystique surrounding many sports, so fans don’t often get glimpses into the athletes’ personal lives or what goes on inside a locker room. Only true fans of the game have any real accurate idea of the particulars in these areas.

As a reader of sports romance, what do you find the most annoying or think the most authors get wrong? Tell me in the comments!

Professional hockey player Rob D’Amico meets kindergarten teacher Alaina Rossa through a reading program for inner-city students.  When Rob observes the lack of even the basic supplies for their education, he takes it upon himself to get the students what they need.

Is it possible Alaina’s soul mate could be found in a world so different from her own? And for Rob, the last person he thought he’d find forever love with was an elementary school teacher.

Alaina was aware the tone of her voice had moved beyond surprise and barreled right toward incredulous, but everything she thought she’d known about professional athletes and, in particular, this man, was being blown out of the water. If he’d really done this, just handing over his own money, and from what she could see, of his own volition, as the Storm didn’t appear to be involved, Rob was an entirely different person than she’d pegged him to be. A thread of guilt wound around her brain. Obviously she’d judged him prematurely, and now she felt like a bitch.

“Yes. Your students shouldn’t suffer because of their circumstances. And if the amount is not enough, tell me and I’ll give you more.”

“Not enough?” Her voice cracked on the last word. “Rob, this is…this is amazing. Truly.”

He shrugged again, rubbing the back of his neck, clearly uncomfortable with the praise.

After rising, she skirted her desk to stand in front of him. “Do you understand how much good this will do?”

Now Rob smiled, and Alaina noticed laugh lines around his eyes. Maybe she’d been right that he didn’t take life all that seriously, but this gesture showed another side to him—one she would have a hard time behaving professionally around. When she’d thought he was a playboy-athlete like so many others, it had been easy to dismiss him. But now…
As the enormity of what he’d done fully hit her, a tear escaped to roll down her cheek. Never before had someone seen the injustice her students endured and done something so quickly and yet with so little fanfare. He’d just handed over the check like it was no big deal.

Before she could process what was happening, Rob wiped at the wetness with the pad of his thumb. When their gazes collided, Rob’s swift intake of breath startled her. He pulled his hand away as if he’d been burned before turning and pacing away.

What the hell is that all about? No way does a guy like him think I’m hot.

Half turning back toward her, he said, “Anyway, I don’t want to keep you, but I couldn’t just hand over the check after my reading thing and run.”

“Okay.” Alaina approached him then reached a tentative hand to the shoulder nearest her. He was about a head taller than her, and when her hand met his flesh it was like touching granite. Rob was built like a tank, which she supposed was an advantage in the rough and tumble sport of hockey. She couldn’t help but feel safe in his presence.

“I don’t even have the words to express my appreciation. ‘Thank you’ is so inadequate.” Another tear escaped, and she quickly swiped at it. She’d probably freak Rob out if she turned into a waterworks right now.

He sighed and darted a glance at her out of the corner of his eye.
“Don’t thank me. I don’t want your thanks. I only did what anyone else would do.”

She knew that wasn’t true, but remained silent.

“And please don’t make a big deal out of the whole thing. I don’t want some reporter tracking me down thinking the check was a publicity stunt.”

“Whatever you want.” She squeezed his shoulder briefly before letting go.

Rob peeked at her one more time then started for the door like he was rushing from a burning building. “See you next week.”

“See you.” She returned to her desk and fell into the chair to stare at the check. This had to rank as one of the strangest days of her life. Alaina certainly wasn’t used to people recognizing the need for funds and actually coming through for her.

She carefully folded the check into an inside pocket of her purse then walked out to her beat-up Toyota Corolla. Her dad had gotten the car for her as a college graduation present, and it had been well-used even then. Now, six years later, the junk heap was held together with duct tape and a dream.

Cassandra Carr is a multi-award winning romance writer who lives in Western New York with her husband, Inspiration, and her daughter, Too Cute for Words. When not writing she enjoys watching hockey and hanging out online.