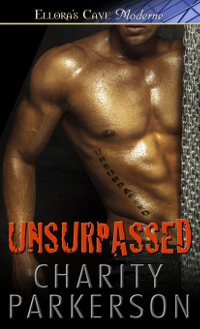 Book 1 in the No Rival series

Aubree is infatuated with two men, Max and Ryan. The two former Marines have been her close friends ever since she made her first misguided attempt at joining their kickboxing classes. When the pair invites her to join them at a weekend party thrown by Drew, a famous MMA champion, she has no idea what they have in mind. After spending one hot ménage night with the pair, Aubree learns the men’s intentions are not all about her. Feeling betrayed, Aubree turns to Drew who is also tugging at her heart. She must choose between the two men who have been the center of her fantasies, and the one man who could make all her dreams come true.

Inside Scoop: This sexy tale includes a ménage and male/male encounters that may leave you wishing for an alpha male fighter of your own.

Leaning against the cool wood of the hotel room door, she met his stare trying hard not to smile like an idiot.

Drew’s eyes flashed. “If you ask nicely, I’ll let you take me to bed.”

She shook her head at his antics. “What if I’m not feeling especially nice?”

Drew brushed his hand over her hip. “You’re right. You did feel naughty,” he agreed. Holding her stare, he bent closer, giving her time to protest his advance. The door opened at Aubree’s back. If she hadn’t hit the solid wall of Max’s chest, she might have ended up sprawled across the floor. Tilting back her head, she took note of the angry expression on Max’s face before switching her gaze back to Drew. His eyes danced with humor as he mouthed, “Denied,” and Aubree slapped her hand over her mouth to smother her giggles.

“I’d like that,” she answered without hesitation. Max growled. At the sound, Drew flashed him a cocky grin before giving her a wicked version of it and turning away. As soon as he moved out of the doorway, Max slammed it closed, focusing his ire on her. She’d never seen him truly angry before now. She laughed nervously.

“No,” she answered, incredulous. “I’ve had two glasses of champagne all night.”

“Your face is flushed.”

Aubree shrugged. “I’m happy. I had a good time.”

Max prowled toward her. The hard set of his jaw caused a flutter of desire to run through her. “Did you forget who you came here with?”

Unable to think of a single retort, she shrugged again. “I’m young and single. Why shouldn’t I enjoy myself?”

Max’s eyes flashed dangerously. His tone had a bite to it when he spoke. “You are not single.”

Charity Parkerson is an award winning and multi-published author with Ellora’s Cave Publishing. Born with no filter from her brain to her mouth, she decided to take this odd quirk and insert it in her characters.

The SubClub Books → ← Random Acts of Fantasy by Julia Kent