The Voices in My Head by Janine Ashbless

The really great thing about writing a collection of short stories is that you can stretch yourself in all sorts of directions, writing from many contrasting points of view.  In my Introduction, I warn the readers of my fantasy anthology Fierce Enchantments not to trust the narrators of the stories therein, and I mean it! Some of them are simply unreliable, some are ignorant of real-life modern moral standards, and some are downright wicked. You have to make your own judgment when reading the stories…

The book opens with a cold, cold voice – Too Much of Water is a fairy tale told in the embittered priggish tones of an old biddy sitting by the fire, warning her young audience not to go down the pagan primrose path to damnation. Some, in contrast, are burning hot: The Last Thing She Needs is an agonized, guilt-riddled confession by a sadist vampire-hunter who has bottled up both his lust and his love for years, not daring to confess what will truly make him whole. Guinevere in Knight Takes Queen is mired in a confused mess of a cuckolding triangle, because no one in Camelot has the vocabulary for bisexuality or BDSM, and they try to frame everything in terms of sin and honour. At Usher’s Well is drenched in rain and grief and pity, the narrative of a servant girl whose three lovers drown at sea … and then come back for one last tryst. The world of The Military Mind is a quasi-fascist future one where individual liberty and choice have been sidelined in favour of keeping the human race alive in the face of alien invasion – so psychic Peyton is prepped by a lifetime of biological and psychological conditioning to take up her role as comms officer and sexual plaything for a squad of horny marines.  The Merry Maid is another fairy story, but this one told with playful humour. And Sycorax is a Shakespearian tale retold by an inhuman monster: don’t expect any mercy or sympathy from her. 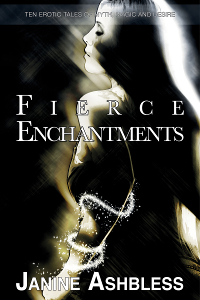 (from the story Sycorax)

But Prospero I have not forgotten. No.

The Isle is mine. It is the Omphalos—the navel of the world. I rule from the earth, by night. The sky above and the day: they belong to Ariel. Belonged, I should say. I … I think we had other names once, long ago. I do not remember them. It does not matter. All stories are leaves on one tree, and the branches may be long but they are all fed by the same roots. Names come and go, like dead leaves. It is perhaps better to forget them, in the end.

Are you hungry, little man? I have a haunch of meat here that is well-cooked and only a little gnawed upon.

Yes, it is from the wreck of your vessel.

Do not ask that. You are hungry, or not. And the night is long, and my story only just started.

Ariel ruled the Isle by day, and I ruled by night. At dusk and dawn we met, as husband and wife, to act out our carnal dreams. At sunset I would ride astride his long beam, and at sunrise he would pin me flat and plough my deeps. His seed came forth in great quantities, I recall—like sea spume, or like the white fluff of poplar-trees blown upon the wind. When I dug my long nails into his golden flesh, then the dawn would come up blood red.

I had many children by him. Have you not read that this Isle is full of noises? We are surrounded by legions; if you have not seen them yet, then it is because your mortal eyes are too dull. But this is the sorrow of it: Ariel let live only those babes I spawned that resembled him, that were of his delicate and airy nature. Those childer that bore my stamp—the dark and earthy, the heavy of flesh—those he hated, and devoured at first sight.

No. For years I bore this, until even I grew weary. And with age fewer and fewer babes were birthed at all. So when at last I whelped my youngest son Caliban, and saw that he favoured me and not his father, I knew that I must hide him to preserve his life.

Oh, have you seen my boy then? Don’t look so green. Think you he is ugly? I do not. Are not his teeth strong and keen? Isn’t his skin, hued with all the shot-silk colours of oil upon water, soft and smooth? The eyes that he opened upon me that first night, in such perfect trust, were as golden and beautiful as the eyes of a toad—and if two eyes are deemed lovely, must not many be even more enchanting?

I gave to Ariel a stone wrapped in blood-stained birthing cloths, and watched as he swallowed it whole. The babe I hid anew within the caverns of my body. And inside me, Caliban grew. But at last the night came when I could carry his weight no longer, so huge of limb was my child; so I birthed him a second time, half-grown. Even then, we both knew he was not safe. We went under cover of darkness to Ariel’s crag, and as the first light of the sun touched the sky with grey, Caliban seized his sire and I split a great pine tree, and together we thrust Ariel into the cleft and closed it tight. It was over in moments: when it was done Ariel was entrapped and my child was safe.

You think I played my husband false? Don’t bother to answer: I see it in your eyes. Well, you may be reassured to know that I have suffered great pangs over the years for my part in the betrayal. I missed his cock within me and his hands upon me; the ache of my loss brought forth great groans of anguish from my innermost being every dawn and dusk. For twelve long years.

That was when Prospero came to this Isle, with his infant daughter in his arms.

Listen well and mark this: the deposed Duke of Milan was no great sorcerer, however he styled himself afterwards. He was a second-rate alchemist—a mumbling book-wizard—a natural philosopher whose philosophy went no further than his own self-importance. But he was a man, and my cunt ached beyond bearing for the rough touch of a man. I saved his life, building him a cell in which to hide him from my own son; bringing him the fruits of the Island; fetching the contents of his leaky vessel from where it had foundered upon the rocks of the bay. I even let the girl-child live, though Caliban licked his drooling chops at the thought of such a tender mouthful. I forbade my boy to harm either of them.

In return I asked only that Prospero service my appetites. It was, I admit, not as easy for him as for my poor Ariel, for he was not so well-endowed. But he was a man of ingenuity and imagination, and where cock would not suffice, fist and forearm would. I demanded only that he persevere in his efforts.

In return for my mercy he betrayed me.

Weaving worlds of fantasy, Janine Ashbless draws from fairy stories, history, myth and the darkest depths of her imagination to bring you tales of passion and desire that will enchant, shock and dazzle you. 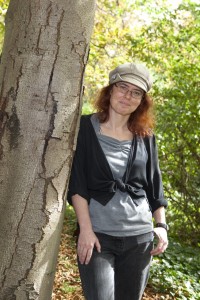 New Years Resolutions Through the Back Door → ← My 2014 Photo Album

3 Responses to “The Voices in My Head by Janine Ashbless”