My challenge is to find ways to tackle them in a way that’s fresh, interesting.

For example, take the whole cliché of the ritual sex on an altar between a sorcerer and his partner or assistant. It’s dark, dangerous, transgressive, it blurs boundaries between private and public… and less analytically, a lot of people just find the idea, instinctively, really hot. But it’s also too common an idea to be interesting. Dubious occult ritual starts and turns into sex scene: that’s far too obvious to make an interesting story. Whether or not it’s sexy, and whether or not there are logical reasons why people find it hot, I’m just not going there without a new take on it – something that makes the scene unexpected as well as raunchy, that works with the characters involved, and also drives the story forward.

Some of these well-used ideas I’ve already reworked – such as the frustrated ghost of a jilted bride trope. Others I can’t imagine doing any time soon, but I’d like to tackle them eventually (lesbian vampires leap to mind – yes, they’re obviously sexy, but no, I can’t imagine at the moment how I’d avoid cliché with that one).

This is not, however, just some sort of creative vanity. The advantage of this approach is that it forces me to find equally interesting story-lines and characters. Erotica is about context – filth is fun, but it only really shines as erotica when the characters and situations are as exciting as the sex.

From the sixteenth to eighteenth centuries, witch hunting manuals claimed that when covens of witches met they would have sex with the devil. It’s a lurid, inelegant idea that today might strike us as ridiculous, but it’s an established part of Western folklore and it works erotically for the same reason that the ritual sex idea does – it’s transgressive, dangerous. The trick then was to take this idea and play with it in a way that kept the sexiness, but lost the rather pantomime crassness, and which worked with the characters in the story.

Not wanting to explain the details (spoilers!), but as the idea developed it became one of the main strands of the plot in Sexual Sorcery.

So, what shall I tick off the list next?

I don’t know, and I can’t know. This can’t be forced. The witch-cult satanic sex idea wasn’t originally intended to be part of Sexual Sorcery. But as the story developed it just seemed a natural fit. Much better to start with a series of possibilities and see which develops its own sense of compelling mystery and sexiness, than to start with an arbitrary idea and cram it into a novel.

But at the moment I’m writing the sequel to Sexual Sorcery. The premise is that, high in the Alps in a remote castle, the Count has invited seven young women for seven nights… you’ve heard that idea before? Of course you have – or something very similar. But the challenge for me is to make sure that, even if you’ve heard the initial idea before, you’ve never read anything like the final novel.

Details and excerpts of the books mentioned above can be found at Mystic Erotica: http://mysticerotica.com/erotic-stories/ 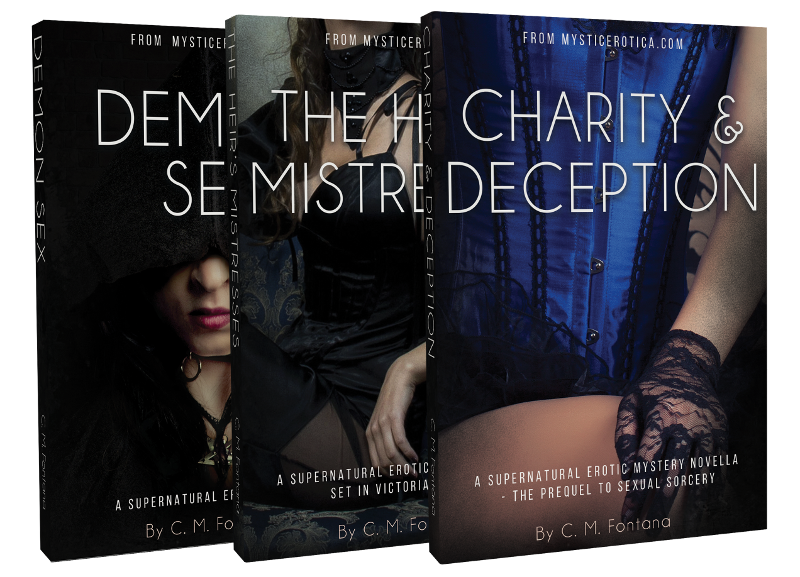 Make sure to follow the whole tour—the more posts you visit throughout, the more chances you’ll get to enter the giveaway. The tour dates are here: http://www.writermarketing.co.uk/prpromotion/blog-tours/currently-on-tour/c-m-fontana/