The Story Behind the Story of Kyoko Church’s Novella, Nymphomania

August 20, 2012   Tags: erotica, kyoko church, novella, nymphomania, the story behind the story, Xcite books
Category: Guest Blogger   Comments Off on The Story Behind the Story of Kyoko Church’s Novella, Nymphomania

It’s my pleasure to welcome Kyoko Church to A Hopeful Romantic. This is her first visit to my site, and I’m very excited to have her here to share the story behind her intriguing new novella, Nymphomania, Book One of the Draper Estates Trilogy. Welcome, Kyoko. Do tell!

Thank you very much for having me on your blog today, KD. I’m so honoured!

You asked how the story for my very first book, Nymphomania, Book One in the Draper Estates Trilogy, came to be. I’m so glad you asked! It’s a quirky subject matter.

I don’t know about you but sometimes I love to browse Wikipedia. I especially love to read about all things sexual. Something about the clinical way they describe sexual acts appeals to the pervert in me. A couple of years ago I came across this page http://en.wikipedia.org/wiki/Female_hysteria. From then I was hooked on the subject of “hysteria.”

That article led me to a book by Rachel P. Maines called The Technology of Orgasm about the history of the vibrator. I became fascinated by the idea that “proper” women in the 19th century and earlier, were thought to not need or want or even be capable of sexual satisfaction. As now seems abundantly obvious as to why, a large number of women in this era suffered from what was termed hysteria, the symptoms of which were everything from headaches to nervousness to “a tendency to cause trouble.” I can only imagine the trouble I’d be causing if I couldn’t acknowledge the need to get off! But I digress. As I was saying, they required treatment from a doctor to reach “hysterical paroxysm,” i.e. orgasm, that temporarily cured their symptoms. They were the doctor’s perfect client since they required regular treatment and were never permanently cured!  These ideas really got my, ahem, creative juices flowing. 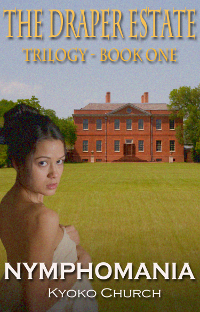 Nymphomania is set in the mid 1800s in Boston. Ewan Draper is a successful mill owner and playboy. In order to satisfy appearances he must choose a wife, and he selects Lillianne, one of his “mill girls.” For Lilly, originally a farm girl now bored by life at the dreary mill, it is a dream come true. But when Ewan discovers his new bride behaving improperly, his friend and dubiously accredited doctor, Phillip Samms, deems her a nymphomaniac and assumes her care. Lillianne is forced to submit to the doctor’s research and therapy, therapy that includes paroxysm which he insists must be brought about slowly, while she is bound and made to be quiet.

Lillianne must convince her beloved new groom of his friend’s questionable motives and prove that she does not truly belong under his care. But what Ewan must avoid at all costs is a scandal that could threaten the viability of the mill, the empire he has built. The mere possibility of his wife being labeled a nymphomaniac and thrown into an insane asylum is enough to make him very leery. So Ewan decides Phillip Samms will leave and he will monitor his wife himself. If she can prove herself chaste and proper, he will tell Dr. Samms they no longer require his services. And the life Lillianne dreamed of when she married Ewan Draper will be realized.

But all the while someone is watching. Someone who could be a threat.

Many of the details in Nymphomania were inspired by historical facts I came across in my research, including the pervading thoughts of the time on nymphomania as a real affliction and such juicy tidbits as Lillianne’s improper use of her sewing machine.

It wasn’t just the monotony. The work on the machine itself was distracting.

As she worked the treadles her thighs rubbed together and this, combined with the vibrations of the machine, well, Lilly had heard that one girl had gotten herself in trouble this way. The two foremen patrolling the mill always had an ear primed to hear the telltale sound of a machine suddenly bursting into a frenzied speed. Rules were strict here and the girls were harshly punished and even docked pay for straying from their work. But docked pay was not the worst of punishments. The way Lilly heard it, last month Mr. Weiler, the older of the two foremen, caught a girl using the machine “improperly.” Lilly shuddered as she thought of the wrinkled, gap toothed grin of the lecherous old man the way it must have been, the way she heard he’d grabbed the girl up, snarling that he would give her what she wanted, and shoved her into the back office. Nothing could be heard over the frightening din of the machines they’d said, but when the girl emerged fifteen minutes later, the pathetic creature’s eyes were red from crying, her lip was swollen and her skirts were torn. She’d disappeared the next morning leaving a note saying she’d gone back to her family’s farm.

So Lilly tried her best to focus on her work. But her mind often betrayed her. And it always seemed to find its way back to Ewan Draper.

She had seen the mill’s owner only once before when he came to consult with the foremen. She did her best not to let her gaze linger too long as he strode across the factory floor, but her quick glimpses drank in his six foot three frame, wavy black hair, wide shoulders and narrowed waist in his finely tailored suit. His stride was long, each step certain and purposeful. His voice commanded respect but his smile was wide and easy. When he laughed it was a profound, sonorous sound from deep within his gut, and he slapped the backs of the men he spoke with. He had actually walked down her aisle and stopped right by her as she worked. She had held her breath and didn’t dare look up, but his hand had lingered for a moment on the edge of her machine as he discussed some small point with the foreman. The size of that hand! She stared raptly at the wide palm and long, thick fingers, something almost brutal in the circumference and apparent strength of each one. She had a sudden impulse to grab that hand, take one of those digits between her lips and suck it. Madness! She had shoved the ridiculous thought aside as her body shivered.

Now the thought returned. Diligently she sat, pushing the coarse fabric deftly through, working the treadle up and down, her thighs squeezed tightly together, her machine drumming its threaded road along its fabric path. The hammering of the needle caused vibrations to pulse through her chair and she worked to push her buttocks closer to the edge of her seat, so slowly as to be barely perceptible. In her mind she caressed Mr. Draper’s hand, slid her own slim fingers between his broad ones, brought them to her cheek and then kissed each finger softly. Now at the edge of her seat she pushed herself down, spread and flattened the soft folds of her flesh firmly on the fabric of her skirts and against the hard wood so as to experience the full intensity of its vibrations. Her thoughts turned to taking that hand, those fingers and pulling them up, under her skirts, between her legs. Slowly she worked the speed up on her treadle, the pushing up and down only serving to further work her thighs against her swelling flesh. She tried hard to keep from gasping as sweat sprang to her brow and began to roll down her temples. Mr. Draper’s imaginary fingers found their target and it took every fibre of her being not to work the treadle to its highest velocity, thereby arousing the suspicion of the wicked Mr Weiler. Instead she continued her steady pace as the vibrations brought her ever closer to her destination.

‘Halt!’ roared the foreman, and Lilly had to stifle a strangled cry of desperation as she unwillingly forced her foot off the treadle causing the vibration to cease.

‘Mr Draper will be visiting the mill in five minutes! This time he wants to take a small amount of time to speak to his mill girls.’ A buzz went around the room. Mr Draper to address the mill girls? ‘I know this is highly usual! I’m sure you’re all excited but let us not allow our emotions to override our good sense. I expect you all to show the highest amount of decorum and industriousness.’

The noise level increased as all the girls turned to each other to converse in giddy anticipation of their much esteemed leader. Lilly, however, was still preoccupied. Her body throbbing, she took advantage of the renewed noise level to gear up her machine to its highest speed. Her mind swirled with thoughts of Ewan Draper now that his presence was imminent: his powerful stride, his commanding voice, his deep laugh. With everyone preoccupied, she worked her treadles furiously, her lower body writhing against the humming chair as she imagined Draper’s hands probing her, rubbing her, taking her. She swallowed her whimpering cries and had just about, had almost, almost, reached her peak just as Ewan Draper entered the mill and Mr Weiler’s piercing eyes fell upon her.

I hope you find the subject matter as interesting as I do! If you’d like to download it, you can get it from Amazon here:

I love to hear your feedback. I invite you to leave your comments! I often post snippets of stuff  I’m working on so if you follow me there you’ll often get a preview of my upcoming work!

For the next 18 years she hid her naughty thoughts in shame. Until she found a community where they were once again appreciated for the well-imagined smut they are. Her short stories have been published in anthologies by Black Lace, Rubicund Publishing and Xcite Books. Book One, Nymphomania, in her Draper Estate Trilogy was published by Xcite in August 2012. At Her Feet will be published by Mischief in March 2013.

You can find Kyoko Church’s most recent short stories in these anthologies: