The Story Behind the Story from Avis Exley

It’s my pleasure to welcome Avis Exley to Hopeful Romantic to talk about her novels, Love Notes and Lovers In Law.

When Kd Grace asked whether I’d like to talk about Love Notes on her Story Behind The Story guest spot, I didn’t hesitate.   I love talking about romance almost as much as I enjoy writing romantic stories, so this was too good a chance to pass up.   Thanks so much, Kd x

I began writing romances in my teens, not long after I started reading them.   For me, they created a magical world of international locations, spellbinding stories and, of course, happy ever after.

Love Notes, was one of my first books and tells the story of Erika Fenn, a world famous singer-songwriter returning to England for the first time in five years.   She’d run away to America to escape a disastrous relationship, pouring her broken heart and soul into her music, and creating songs that turned her into a global superstar.   The last person she needs to see upon her return is Aiden Thirstan, the man who’d broken her heart in the first place, and who’s now saying her future’s under threat too.   Can she trust him to help her and, more importantly, can she trust herself not to fall in love with him all over again?

The story had everything I thought the publishers wanted – an alpha hero, a beautiful heroine and a romance set inside the glamorous music industry.   Full of excitement, I submitted it to a major romance publisher, only to be told that the characters weren’t deep enough and that the background story intruded on the romantic relationship.   Undeterred, I started work on a second novel, Lovers In Law, only to be met with the same rejection, even though I rewrote and resubmitted both novels a couple of times more.

Completely disheartened, I abandoned all hope of becoming a published romance author but it didn’t stop me writing.   By this time I had a young family and wrote whenever they were asleep, stockpiling over a dozen manuscripts in a drawer where they gathered dust and never made it as far as a publisher’s desk.   Then stories began appearing about Print On Demand publishers and self-publishing but the high set up costs in the early days meant this wasn’t an option either.

Still I wrote, adding to the huge pile of paper, until along came Amazon with their Kindle and the easy upload of manuscripts to their e-book store.   Taking my courage in both hands, I decided to give readers the chance to decide whether my work was good enough.   First, I did lots of fun research, reading books from Siren and Ellora’s Cave, and realising that there was no magic formula any more.   I could write exactly what I pleased in a style to suit myself, and even make up a brand new genre if I wanted to!

Having done my market research, I knew I needed a unique selling point – a niche of my own.   I began rewriting around the time of the Royal Wedding, with the whole world was going mad for Will and Kate, so I decided to make my books distinctly British.   As I live in London, inspiration was all around me so it made perfect sense to use the city’s iconic locations as a backdrop and to write everything in a British accent. 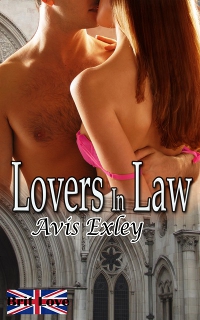 I wanted to release two books together so rewrote Lovers In Law alongside Love Notes and uploaded them both to Kindle on the 1st August.   Then I played the waiting game.   A couple of my Facebook friends read them in the first week and posted five star reviews and, after that, the word began to spread.   More five star reviews appeared on Amazon, followed by several on Goodreads and lots of positive comments on Facebook.   Readers didn’t just like my books, they loved them, and couldn’t write a review without using the word “steamy”.   They even made it into the Top 100 of Goodreads’ Best Dirty Talk booklist.   http://www.goodreads.com/list/show/14805.Best_Dirty_Talk?format=html&page=1

But the best reviews of all were the ones that praised the quality of my writing.   I didn’t want my books to be a succession of sex scenes strung together in a weak storyline.   I also wanted a really strong plot, lots of sparky dialogue and believable characters that didn’t race inevitably to a happy ever after.   One Goodreads reviewer even said the writing was so strong, I’d easily sit alongside the mainstream, bestselling writers and she saw no reason why I wouldn’t become one of the great romance writers of al time.  My writing style hasn’t changed much since those very early rejections but now it’s the readers, not the publishers, making the decisions!

I’m currently working on my third novel, a brand new story set in an English stately home, that can only be summed up as Downton Abbey with a huge twist and lots of sexy scenes.   After that, there are still another fifteen dusty stories in the drawer so I might be around for a little while longer!   To whet your appetite, here’s a little snippet from Love Notes.  Enjoy!

Aiden laced his fingers through Erika’s and pulled her hand close to his chest where she felt his heartbeat through his shirt.   Her pulse picked up the rhythm of his heart and slowed, losing its turbulence.

“I’m not talking about going back to where we left off,” he said.   “We can take it as slowly as you like.   Start fresh and see where it goes.”

“Right back to heartbreak,” she thought out loud, indecision writ large across her face.

“Why?   You can’t deny there’s still a connection between us.   We can’t keep our hands off one another.   Why else would you have kissed me?”

“That’s different.   Of course there’s physical attraction, but you’re talking about a relationship.   Love, commitment, trust and everything in between.”

“Then let’s start with the sex and work up from there.”

“What!”   The suggestion came so unexpectedly Erika could barely gasp out a reply.

“You heard.   And don’t pretend you’re shocked.   You have a body made for sin and the other morning proved you’re still no angel.   If this weekend is about sex and memories, why don’t we play to our strengths?”

Devilment sparked in his eyes as he waited to see whether she’d take the bait.   The hook snagged somewhere close to Erika’s libido and embedded itself, releasing the dam burst of desire she’d held back since first seeing him that evening.

Where would be the harm, she asked herself?   After all, Aiden took sexy to a whole new level and it would be a shame to waste it.   Erika wasn’t the only one with a body made for sin and Aiden’s remembered wickedness had inspired every raunchy lyric she’d ever written, including a few too x-rated to record.   Not to mention the delicious dreams that visited her most nights as she drifted off to sleep.

“I can see you’re thinking about it,” Aiden said after Erika’s silence had gone on too long.   “We could have a lot of fun before you head up to London.”

Erika pretended he had nothing of interest to offer her.   “You forget, I’ve already sampled the merchandise.   Maybe that option won’t appeal to me either.”

“And perhaps you just need a little more convincing.”   His eyes widened suggestively.   “The other morning, you took what you wanted and left.   I wasn’t allowed to join in.”

“Would it have made any difference?”

In reply, Aiden reached up and placed his fingertips on the side of her neck, just below her ear, allowing them to flutter against her skin like butterflies’ wings.   “If I kissed you here right now I’d give you goosebumps along your arms.”

Erika half closed her eyes as a thrill of arousal trickled through her skin, just as Aiden had predicted.

His fingers then moved around under her hair and circled each one of her neck bones before caressing the sensitive nape.   ”When I gave you a massage, I started here and, by the time I was half way down your spine, you’d be begging me to make love to you.”

He whispered the last, leaning so close his cheek brushed hers and the powerful, masculine scent of him engulfed her, goading her into touching him.   Without warning, he dropped his hand and pinched the tender skin on the back of her knee, making Erika gasp.   “After we’d showered, I’d dry you off and kiss you from ankle to thigh before letting my tongue…”

“Okay.   Okay.   You’ve made your point.”   Erika jumped in before he could go any further, her skin temperature having leapt by ten degrees.   “Leave something for the imagination.”

“Are you sure you don’t need reminding how I could make you come simply by touching your nipples?   Or how I’d start at your navel and…”

“Enough!”   Erika glared at him but found it impossible to cancel the image of his tongue travelling down across her belly, and her cheeks flushed.   “People are staring.”

Aiden laughed at her embarrassment, the deep, rich sound setting off sensual vibrations in Erika’s bones.   “So why don’t we escape to your room?”