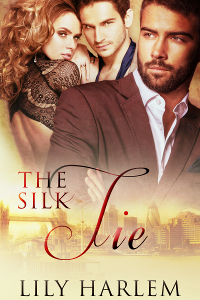 “If you enjoyed The Glass Knot you’ll LOVE The Silk Tie.”

New from Lily Harlem, The Silk Tie, a steamy ménage a trois novel (mmf) that celebrates desire, fantasy and follows the brave decision of a woman to let a third into a her relationship. It’s steamy, sexy and leaves no detail unexplored. Grab a copy, settle down and enjoy a rollercoaster of emotions with Hayley, Gabe and Brent.

The Silk Tie is available from Amazon

Professional life in the City of London is tough going which is why my husband Gabe and I live by the motto work hard and play hard. So when something, or rather someone, comes along that changes how he wants to play I’m intrigued by our sexy new game.

But there’s always private sides to the ones you love, and in this case new thoughts and desires are stealing Gabe’s dreams. It’s not until I meet Brent—gorgeous and sophisticated yet soul-achingly alone—that I begin to understand the complex layers of Gabe’s needs and exactly what I have to do.

But I’m not afraid; in fact the idea of two men turns me the hell on. In a whirlwind of romance, fear, desire and a new cresting wave of passion we open up to each other, testing the water for one weekend only. Or is it? Will we ever be the same again? Can Gabe and I survive our decision to let a third into our bed? Can Brent just walk away and, more importantly, will we let him?

The bathroom door opened, and Gabe wandered out wearing his favorite pair of worn jeans. His chest was bare and his hair was damp and pushed back over his head. He’d shaved that morning but I could smell a fresh application of his most expensive cologne.

“How are you doing?” I asked, standing.

Damn, he looked so absolutely fuckable.

“Yes.” My stomach was tense and my skin hot and tingly, a bit like going up the ramp on a rollercoaster. But I was okay.

“No matter what happens, remember I love you,” Gabe said. “You’re my wife, my soul mate. Nothing can change that.”

“I know, and you remember that this is your moment of fun with Brent. Go with it. Forget I’m here. Realize the fantasy.”

“I doubt I’ll forget that you’re here…” He paused and smiled. “Well, maybe a little.”

I ran my hand down his chest then smoothed it over the lower curve of his defined pectoral muscles. “I put out the lube and condoms.”

He glanced at the locker. “Thanks.”

There was a knock at the door.

We both looked at each other then at the entrance to the room.

The door opened and Brent walked in.

He wore tight black boxers and nothing else. Like Gabe’s, his hair was damp.

He shut the door up and stood still, staring at us.

Gabe dropped his hands from my face and I took a step away.

“Too dark?” Gabe asked. “I can open the curtains.”

“No, it’s perfect,” Brent said, walking around the end of the bed and up to Gabe. “I can see you but it’s not dazzling. My eyes are adjusting now.” He smiled and gestured to the chair, looked my way. “You’ve found your viewing position, I see.”

He stepped past Gabe, reached for my hand and drew my knuckles to his lips. “I hope you enjoy the show.”

He released me and turned to Gabe.

I admired Brent’s torso as he moved. Long and sleek, his muscles rippled gently beneath the surface. He didn’t appear to have any fat on him, he was just neat, harnessed strength. And his boxers covered an impressive bulge, the outline of which was easily made out. I’d guess he was already half-mast just with the anticipation of fucking Gabe.

“You smell good,” he said to Gabe as he ran the tip of his index finger over Gabe’s shoulder and down his bicep. “Delicious, in fact.”

Brent smiled then leaned forward and kissed my husband.

I stood and watched, mesmerized, the way I had been when I’d spied on them. Their large jaws moved in time. Both men had their eyes shut and the dance of their mouths showed their sleek tongues touching and exploring.

Gabe moaned a little, how he did when he became lost in a kiss, and he set his hands on the sides of Brent’s waist. The touch seemed a little hesitant, a bit awkward, though I could tell he was completely invested in the kiss.

Brent pulled back a fraction. He rested his palm on Gabe’s cheek then turned to me. “Come here, Hayley.”

I did as he’d asked. “What?” I asked quietly. My heart was thudding—just seeing them kiss did seriously stimulating things to my libido.

That was an instruction I didn’t need to be given twice.

Brent kept his hand on Gabe’s face as I meshed my lips with Gabe’s, prodding his tongue with mine and absorbing the lingering flavor of Brent in his mouth.

When I broke the kiss, Brent placed his hand on my face, too, so he was holding us both.

“You two are hot together,” he said smiling. “And so perfect for one another. I feel honored that you’ve let me in to fulfill a fantasy.”

“We feel the same about you being here,” Gabe said. He touched Brent’s mouth with his fingertips and traced the shape of his lips.

Brent smiled and gazed at Gabe. He then dropped his hand from my face and, as I’d done earlier, he caressed Gabe’s chest.

I felt Gabe’s shoulder shift against mine as he sucked in a breath. Being touched sensually, by a man, was what he’d wanted.

“I didn’t think you’d bother with jeans,” Brent said, slipping his hand down to Gabe’s waistband.

“Let’s have a look then, shall we?” Brent sank to his knees so his face was level with Gabe’s groin.

He undid the top button on Gabe’s jeans, then the next and the next. His big fingers worked slowly but steadily and his face held a serious expression of concentration.

Gabe was utterly still at my side.

Brent released the last button then tugged and shifted the jeans down to Gabe’s knees.

Gabe’s cock sprung forward, stiff and thick. The veins were raised and it jutted jauntily toward Brent’s face.

“Commando works for me,” Brent said. He swept his tongue over his bottom lip and stared at Gabe’s erection.

“I need…” Gabe kicked a little and rid himself of his trousers completely. “To lose these.”

Brent smiled and shoved the jeans aside. He didn’t take his gaze from Gabe’s cock. “Good, naked is how I like you best, so it seems.”

I liked Gabe naked too, but I wasn’t about to speak and break the sizzling connection between the two men. It was almost palpable. The air was alive with need.

Brent slid his palms up from Gabe’s knees to his thighs then tickled his fingers through Gabe’s wiry pubic hair.

Again Gabe tensed. He swayed too.

“You have an incredible dick,” Brent said. “I want to taste it.”

“Okay…” Gabe said, his voice breathy and light. “I mean yes…please do.”

Brent smiled, but only briefly because then he opened his mouth, leaned forward and took the head of Gabe’s cock between his lips. He gripped Gabe’s shaft with his right hand and with his left, scooped up his balls.

I snapped out my arm and curled it around his waist, felt his weight sag against me as I supported him.

Brent slid Gabe’s shaft deeper. His eyes were shut and his jaw pulled wide. He fed Gabe in, slipping his fingers over his erection.

Gabe reached out and weaved his fingers into Brent’s hair. “Fucking hell,” he gasped.

Brent kept going. I knew how much of Gabe I could take in my mouth, and it wasn’t to the root but Brent was nearly there now. His cheeks bulged and his nostrils flared. I could hear him breathing hard through his nose.

I held him tight, my nipples peaking against my floaty sundress and my pussy dampening the gusset of my knickers.

Brent’s face became buried in Gabe’s pubic hair. His shoulders were raised, tense, and his hand that had gripped Gabe’s cock now squeezed Gabe’s hip, his knuckles were paling.

I knew he’d be fighting his gag reflex. He had Gabe so deep, so far down.

He began to withdraw.

Gabe dragged in a deep breath then blew it out slowly.

Brent took hold of Gabe’s shaft again and held it tight. He pumped from the base to the tip several times, pulling on the skin and working his tongue over and into the slit.

Gabe moaned and flexed his hips.

“Ready for more?” Brent asked, looking up at Gabe.

Again, Brent opened his mouth wide. He took Gabe on a fast ride to full-depth.

Gabe gasped and curled his fingers into fists in Brent’s hair.

My hands tingled with a desire to also touch Brent. Feel his hair, the texture of his skin. But I didn’t, I kept them to myself. One arm around Gabe’s waist, the other bunching up a handful of my sundress. I couldn’t interfere, that wasn’t my role here.

Brent was pulling back and sinking deep on Gabe’s cock over and over, his whole body rocking backward and forward.

Gabe was breathing fast, his abdomen was tense and I could feel tremors rippling over his muscles. 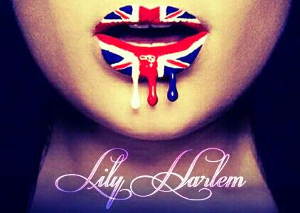 Her latest novel, Breathe You In, is a super-sexy romance with a twist that will not only heat you up but stay with you for years to come. Breathe You In was named a USA Today Reviewer’s Recommended Read of 2013.

Lily also co-authors with Natalie Dae and publishes under the name Harlem Dae – check out the Sexy as Hell Box Set Trilogy available exclusively on Amazon – The Novice, The Player and The Vixen – and That Filthy Book which has been hailed as a novel ‘every woman should read’.

2 Responses to “The Silk Tie by Lily Harlem (@lily_harlem)”